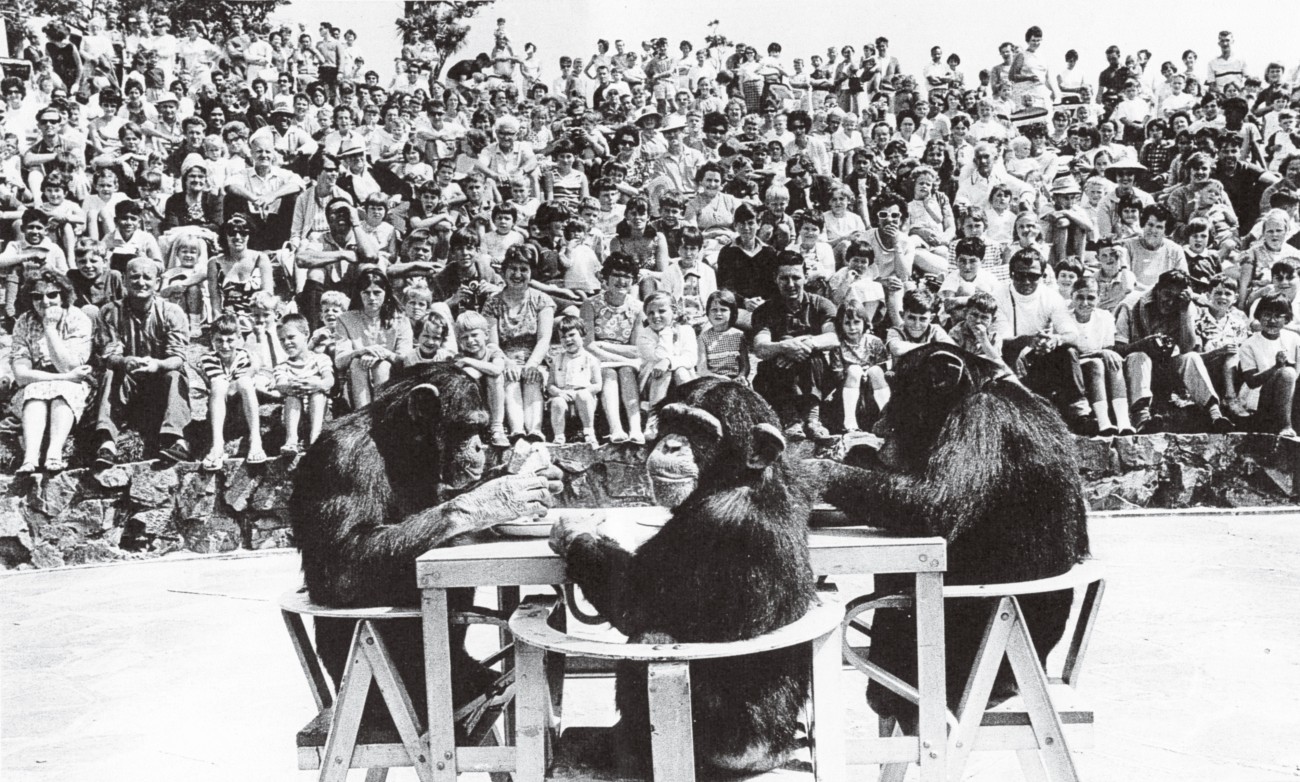 Live animal performances such as the chimp tea parties and elephant rides imme­diately boosted the zoo’s income when they were initiated in the 1950s.

New Zealand Herald files of 1956 show a bunch of subdued, travel-weary chimps ar­riving from London. Janie, Bobbie (the only male), Minnie and Josie were sent to Auck­land Zoo while Yoka, Molly and Breena went to Wellington. The chimps, captured as juveniles in Africa, had to adjust to an entirely new way of life, obliged to practice their tea-party routine constantly at Regents Park Zoo and even aboard the ship on the passage to New Zealand.

If they were malleable when young, the chimps became less obliging as they ma­tured. Former Zoo Supervisor Derek Wood recalls: “Sometimes they could be quite ob­streperous, especially Bobbie. Often they refused to come out of their cages, and there was a time when one decided he wasn’t going to sit at the table.” Consequently, the aging actors were retired in 1959 and more amiable chimps arrived from London to re­place them.

The tea parties continued until the ear­ly 1970s, when public attitudes towards performing animals had changed. Zoos, similarly, had shifted their focus from public entertain­ment to animal welfare, and an era of massive upgrades began. The chimpanzees and their descendants were moved from their barren cages to large vegetated enclo­sures, where they could interact with their kind without human intrusion. But Janie and Bobbie had learned to interact almost exclusively with humans—and behave like them—and had lost the social skills of their species. Old, and socially impaired, they preferred their outdated but familiar enclosures.

These days zoos attract the public by of­fering animal encounters and safari nights. And Janie’s life is made as comfortable and as interesting as possible, with devoted zoo staff keeping her entertained with toys, books, even movies. She prefers animal doc­umentaries, especially TV2’s The Zoo series, presumably because she recognises the peo­ple and places. The former tea party star also has a range of beverages to choose from, her favourites being apple and blackcurrant juice, herbal tea and hot chocolate.