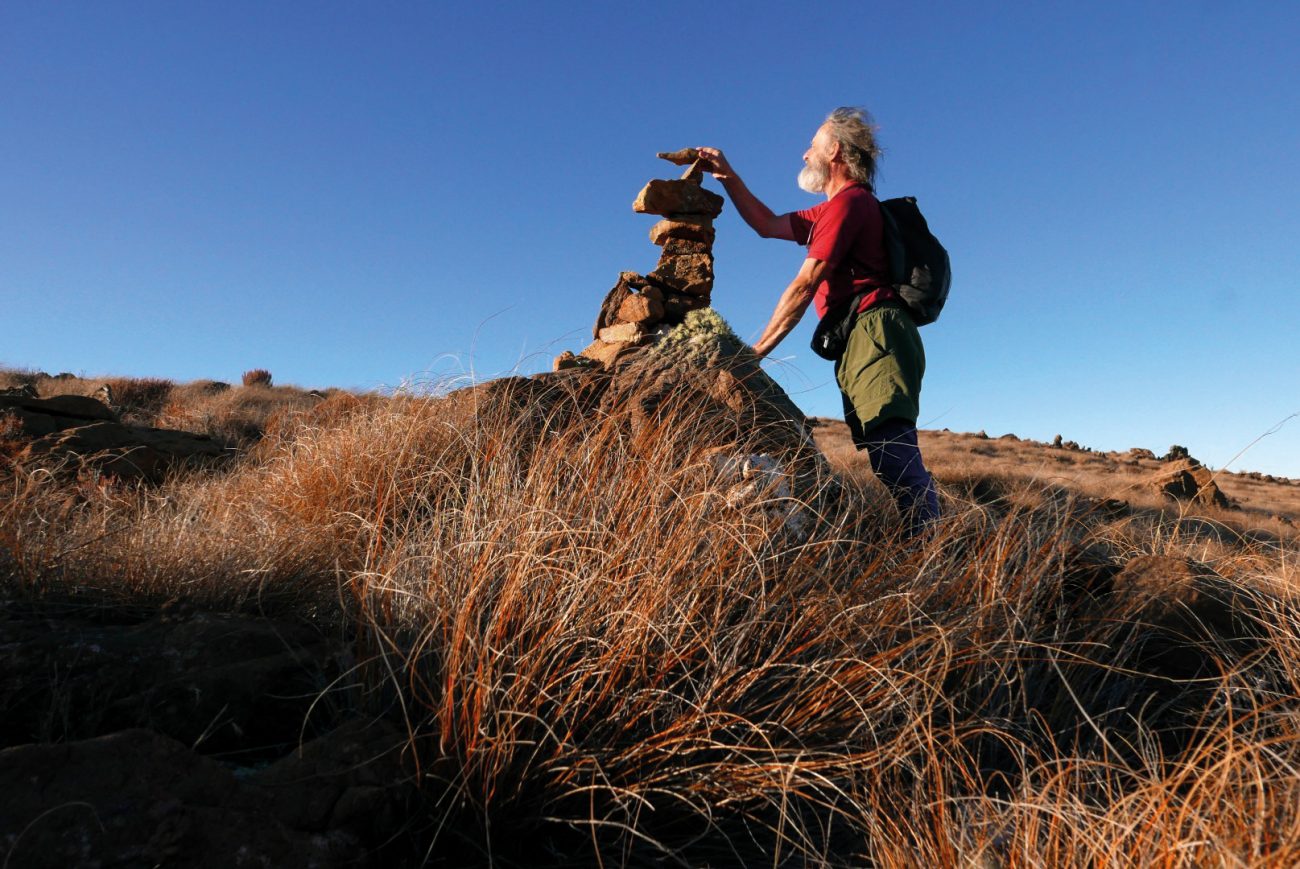 I was in the Richmond Range recently, climbing through tussock and scrub up into the Red Hills. The route was untracked and unsigned—but not unmarked: there were cairns to show the way. I love cairns. Rock on balanced rock, cunningly constructed to withstand wind and weather, they are more than markers—they tell a story of those who have gone before.

But the story’s details—who, when, in what circumstances these edifices were built—are never known and must be imagined. Were they assembled on a scorching summer’s day, or with numb fingers during a snowstorm? Were they group efforts or the work of a single artisan? All we know is that their makers cared enough to pause and build, for the benefit of those who come after. In response, we followers place another stone on the structure. We add a line to the story.

This experience came to mind when I learned of the passing of Tony Maturin in July. Readers with long memories may recall his 1996 photographic essay on the Greenstone Valley. Tony worked as a volunteer hut warden on the Greenstone Track, which winds between Lake Wakatipu and Fiordland, and had come to think of the valley as a spiritual home—a place “filled with the conversations of cicadas, wind in the tall red tussocks, the flight of birds”, as he put it, where “a sense of timeless eternity, of things on an infinite scale, draws the spirit outwards”.

His images of damselflies, fungi, orchids, chafer beetles, mayflies and more were a delight. A photograph of copper butterflies on the blossoms of ragwort was a van Gogh sunburst of yellow which became the cover of that year’s Geographic calendar.

As far as I know, Tony is the only person to have quoted philosopher Martin Buber in the magazine. Buber said our relationship to the world should be one of ‘I-Thou’, not ‘I-It’. For Tony, photographing nature was a way of being drawn into that I-Thou awareness.

When I visited him at his beloved McKellar Hut, a few weeks before publishing the story, he told me another way he was moving towards the I-Thou relationship: he had given up trout fishing. The Greenstone is a popular river with anglers, where, as Tony wrote, “three-pound jack rainbows will come flashing up to take a nicely placed Coch-y-Bondhu fly”. But after his fifth season in the valley, he left his trout rod at home. Angling had too much It, not enough Thou, for his taste. What right did he have to “hassle a little animal” for his amusement? “Now I fish for pictures,” he told me.

That night, he took me fishing. After a meal of rice custard and hibiscus tea, we walked into the forest to look for “jewels of the night”, as he called them—cockroaches and other nocturnal creatures. And we found them. As I wrote in my editor’s comment for that issue: “Here a harvestman—a black droplet of tissue atop eight spindle-thin legs; there a cave weta, fawn and chocolate mottled, resting on a cluster of white fungal caps; and, sure enough, a native cockroach the colour of hokey-pokey, glistening as though freshly varnished, stopped in its tracks by the light.”

In the course of conversation, Zen and the Art of Motorcycle Maintenance came up, and Tony asked me if I had read Robert Pirsig’s follow-up book, Lila. I hadn’t. And it was only this year—prompted by news that Tony was dying—that I decided it was high time I read the book.

Lila is a metaphysical exploration—via a boat trip down New York’s Hudson River—of the question of quality in life. What makes a life excellent? For Pirsig, excellence comes from following life’s dynamic potential for growth while avoiding becoming trapped in static, dysfunctional patterns of thought and action.

Tony could never be accused of settling for static patterns. His hunger for social justice took him for months at a time to Guatemala, Iraq, Cambodia and South Africa to work for human rights.

Near the end of his life he became an advocate for climate-change action. He saw the connection between global warming and global inequality, and it troubled him.

He stopped driving a car and using air travel. He had given up eating meat long before. Of his years of activism, he said: “Something inside you says it’s so important you can’t stop.” Even when you’re 87.

Looking back at what I wrote in that 1996 issue, the 30th in New Zealand Geographic’s existence, I see that I quoted Henry David Thoreau: “It takes two to speak the truth—one to speak, and another to hear.”

Tony—like Thoreau, a philosopher drawn to water—spoke, and I heard. Twenty years later, that conversation is still bearing fruit. I am adding stones to a cairn that Tony laid down.