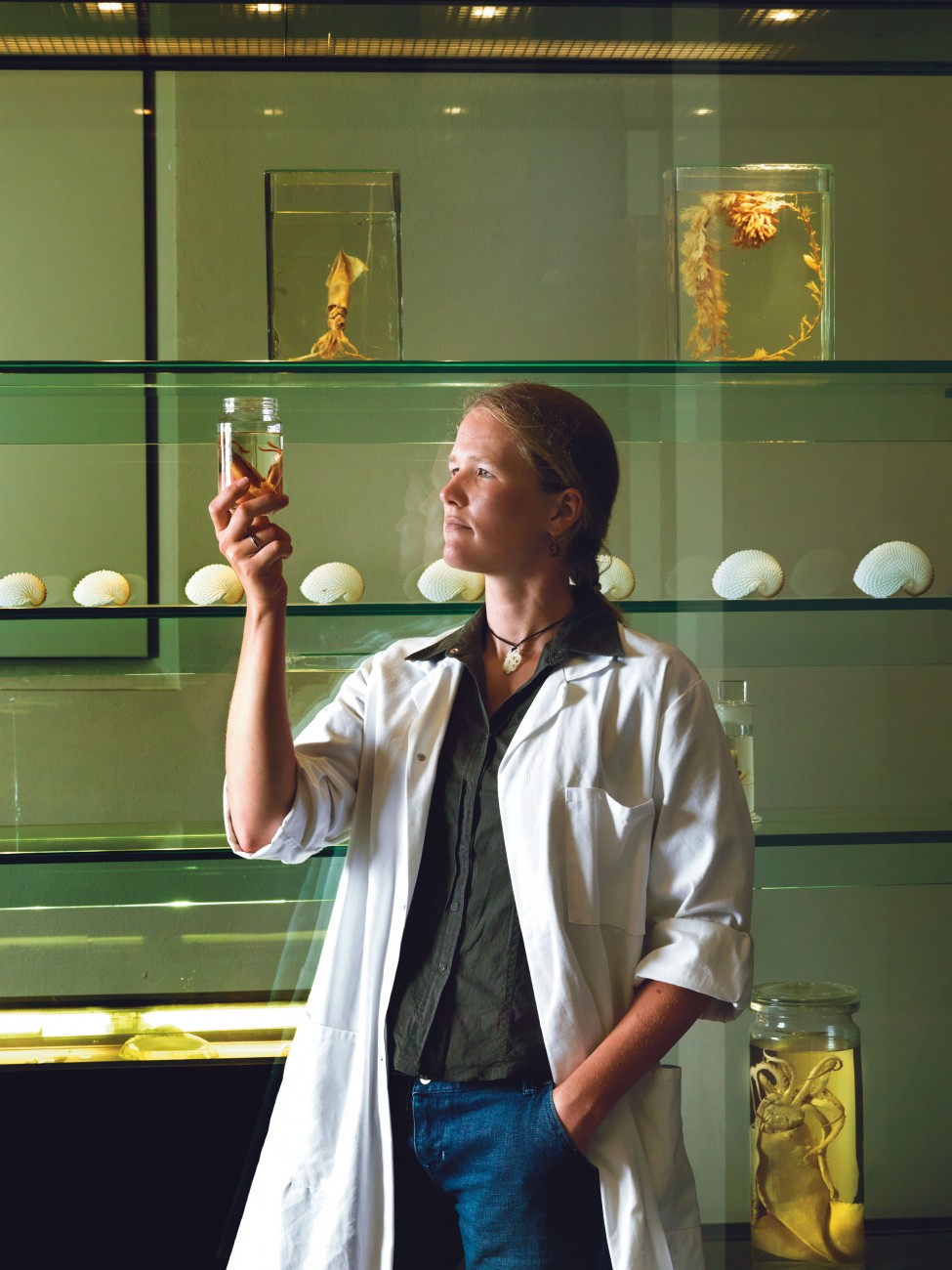 Bolstad, originally from northern Minne­sota, says her interest in cephalopods was piqued when she was studying marine biol­ogy in college and working part-time as an intern at the New England aquarium. There, it was the giant Pacific octopus that caught her attention. “She was obviously a very in­telligent animal compared to anything else that lives in the ocean.” She would often try it on. “She would put four arms on you and four arms on the glass and give you a good pull. You had to be prepared or you would get a good dunking.”

Later, Bolstad did a term’s study at the University of Otago and it was soon after that she met renowned squid specialist, Steve O’Shea, who encouraged her to stay in New Zealand and write her PhD on squid. “He’d just done everything that needed to be done on octopus, which would have been my first choice. But he said that New Zealand has more species of squid than any other country in the world—more than 90—and someone needed to work on them. I thought, okay, octopuses are cool and squid must be really bright and interactive too.”

However: “They’re not. They’re very stu­pid. The brain in a 275 kilogram giant squid weighs about 20 grams. There is just enough space there for ‘is this food’ and ‘should I mate with this’ and ‘should I run away’.”

Fortunately, says Bolstad, squid are fas­cinating in other ways. For her PhD, she completed a global systematic revision of the Onychoteuthidae, a family of squid with species that range, as adults, from 100mm to 4m long. The taxonomy was “a mess” and sorting it out meant travelling to a dozen or so museums in eight different countries, cracking open dozens of vials, snap-top jars, lead-foiled cylinders and plastic buck­ets (many of which hadn’t been opened for years) and examining hundreds of gelatinous corpses. “I’m not sure what feelings shelves of preserved dead animals evoke in most people, but for me, there is something al­most holy about the stacks,” she recalls in an online magazine for cephalopod enthusi­asts. “I recognise that not many people want to spend their lives wandering through the shelves of small corpses floating in a variety of semi-noxious chemicals…I guess we all do what we love, however quirky.”

The research required her to identify the most subtle differences, such as the varia­tions in the shape of the light organ beneath a squid’s eye, in the texture of the skin, in the morphology of the double row of hooks that line each squid’s two tentacle clubs. “We use this really cool technique, scanning electron microscopy (SEM), where you coat the specimens in metal and fire electrons at them. The electrons bouncing back give you an image. This is how you examine really small things…and see structures that you’d never see otherwise.”

Unsurprisingly, hauling out reeking speci­mens isn’t always fun and there were times when she couldn’t imagine ever completing what she’d set out to do. But in the end, it was worth it, and the resulting thesis “ten­tatively” boosts the number of known spe­cies of onychoteuthid from around 14 to 26. However, it seems that the Onychoteuthidae aren’t the only family of squid to suffer from taxonomic neglect, and one of the respons­es to her thesis from an internationally re­nowned cephalopod specialist went some­thing along the lines of: “This is a very useful revision of this family. Now please turn your attention to the following eight families…”