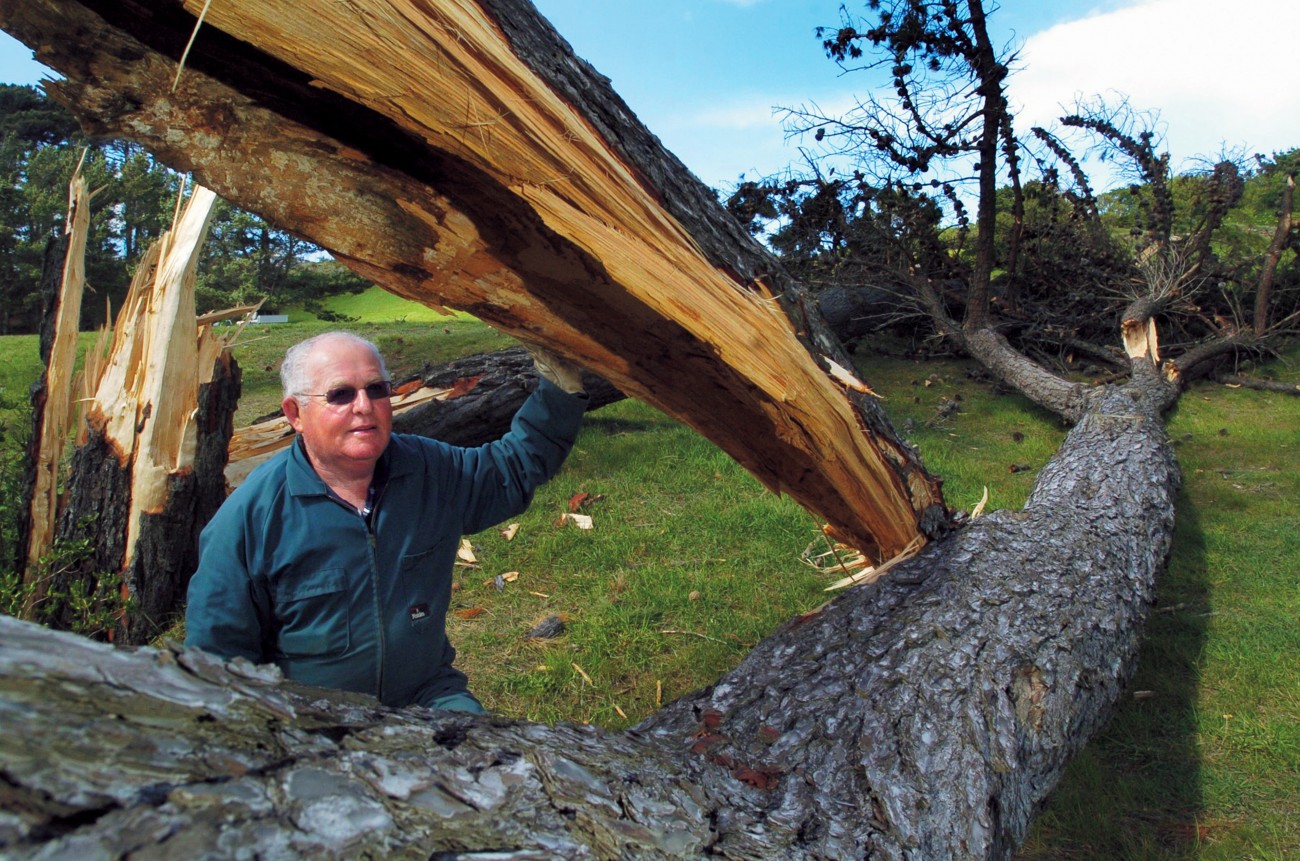 Severe gale westerlies gusting 130 km/h tore into Invercargill around dawn on Tuesday October 23, felling trees and chimneys, ripping off roof­ing iron and smashing in windows. Sheds, hothouses, verandas and a bus-stop were blown away and the brick wall of a building in Bluff col­lapsed as most of the roof came off. A fireman needed stitches after he was blown off a roof in Bluff and a number of people were treated for injuries caused by flying debris.

Because the winds came early, many people stayed inside and several schools cancelled lessons for the day. However, staying inside did not guarantee safety. One woman was eating breakfast in a farmhouse when part of the ceiling hit her in the face after a tree fell on the house driving a large branch through the roof. Fallen trees blocked roads and railway lines as well as cutting power to 2500 homes.

Otago was affected as well, with downed lines cutting power to 5000 homes. A couple of trucks were over­turned on Windy Ridge near Bal­clutha, where a hole was punched in the roof of the swimming pool. Near Oamaru a fire started when trees came down over power lines.

The South Island did not have a monopoly on destructive wind. Later in the day, in central Hawke’s Bay, five trucks were blown over on the Takapau plains between Dannevirke and Waipukerau. An ambulance was also blown off the road and then rolled through 360°, ending up back on its wheels. The driver was shaken but unhurt and a second ambulance was dispatched to rescue a woman trapped in her car by a fallen tree.

The damaging winds were caused by an intense depression passing just south of Stewart Island. This depres­sion deepened by 33hPa in 24 hours as it moved rapidly east from near Tasmania. To meteorologists, such rapid deepening is known as “explo­sive cyclogenesis” and the resulting deep low colloquially referred to as a “bomb”. Bombs occur with devas­tating effect off the east coast of the United States where rapid deepening in excess of 40hPa has been re­corded. In the Southern Hemisphere, the western Tasman Sea is one of the most favoured places for explosive cyclogenesis.

A number of circumstances have to coincide for explosive cyclogen­esis to occur. A warm ocean current running adjacent to a cold landmass or body of cold water is one. As a consequence of the earth’s rotation, warm ocean currents, moving water from the tropics towards the poles, are found east of all the continents. In the North Atlantic, the Gulf Stream runs up the eastern seaboard of the United States, while in the western Tasman Sea, a warm cur­rent heads down the Australian east coast, then near Tasmania, meets colder water coming from the west. The sea surface temperature affects the temperature of the air above it, so where warm water runs adjacent to cold water, you find warm air meeting cold air, which promotes the formation of fronts and lows.

Another ingredient in the recipe for a bomb is a fast-moving short­wave trough in the middle atmos­phere. In the pressure contour lines of a mid-level weather chart, this shows up as an upside down U shape. As the trough moves rap­idly eastwards, the air moves even faster through the trough. Air passing through the sharply curved apex of the trough gains cyclonic vorticity which it carries downstream and this causes air pressure to fall at sea-level. The faster the mid-level winds and the sharper the curve round the trough, the greater the effect in lowering surface pressure. Similarly, a favourable orientation and accel­eration of the jet-stream in the upper atmosphere can further enhance the lowering of surface pressure by removing air from above the devel­oping low faster than it brings more air in from upstream.

Finally, a key ingredient in explo­sive cyclogenesis is a plentiful supply of low-level air with high moisture content. As this air rises inside the developing low some of its water vapour condenses to liquid thereby releasing into the air the consider­able amount of energy needed to evaporate the water from the sea-surface in the first place. The heat makes the air expand, which further lowers atmospheric pressure at the surface. All these conditions were met in the formation of the bomb on October 23, but the contribu­tion from the vorticity in the strong westerlies stood out as particularly significant.

October turned out to be a par­ticularly windy month over the New Zealand region. Statistics keep by NIWA showed that it was the fourth equal windiest October on record! When the atmospheric pressures were averaged for the entire month and compared to the long-term aver­age, pressures along 50° south from below Tasmania and New Zealand were found to be 7 to 10 hPa below average, while pressures from about Auckland northwards were higher than average.

The strength of the westerlies de­pends on the temperature difference between the tropics and the Antarc­tic. Interestingly, during October this year the sea-ice extended further away from Antarctica in the longi­tudes of Tasmania and New Zealand than normal. Sea-ice forms around Antarctica in autumn and winter reaching a maximum of 19 million sq km in September, and then rapidly diminishes to a minimum of 3.5 million sq km in February. Air mov­ing off the Antarctic towards New Zealand can receive as much as a hundred times more heat from the ocean surface as from sea-ice. Even though the surface water tempera­ture near the ice edge is around 0° C, it is significantly warmer then the ice surface and so can transfer more heat into the air flowing off the frozen continent, whose tempera­ture can be as low as minus 20° C. Furthermore, sea water evaporates readily into the dry Antarctic air, par­ticularly as breaking waves throw up tiny droplets of spray. As it is heated from below, the air rises and shower clouds form. When clouds form, water vapour condenses, thereby releasing further heat into the air.

So, when the sea-ice extends further towards New Zealand than normal it has the effect of concen­trating the pole to equator tempera­ture difference over a smaller range of latitudes and therefore intensifying the westerly winds in our region. Paradoxically, the stronger westerlies then act to erode the edge of the sea-ice, which is mostly less than a metre thick, and therefore easily bro­ken off by the heavy swells created by the westerly gales.

In the atmosphere, feedbacks occur across a wide range of processes. Just as the particularly strong westerlies
of October were an important ingredient in the explosive formation of the bomb that brought destructive winds to Invercargill, so the strong westerlies contained the seed of their own destruction by whipping up heavy swells to chew off the edge of the sea-ice.