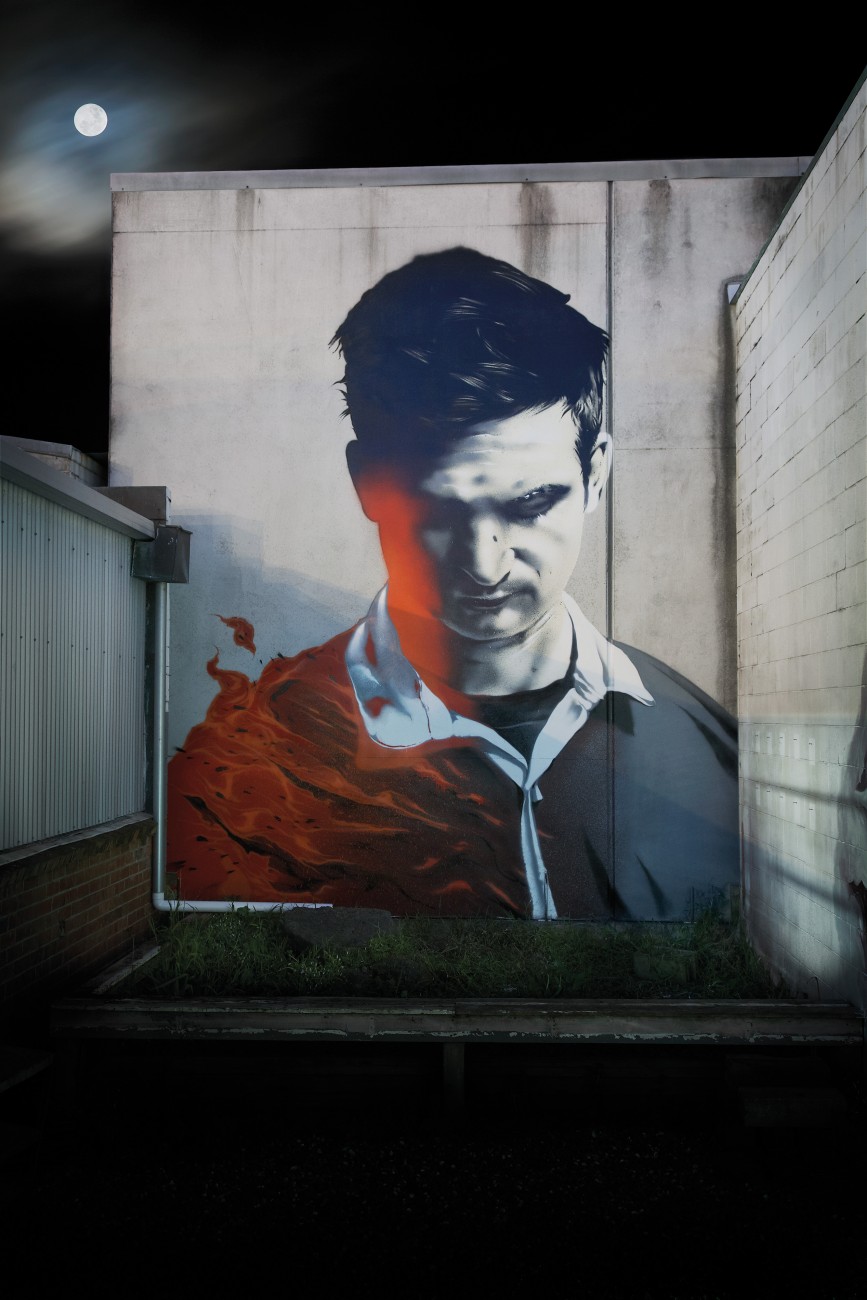 Instead of submitting a conventional art portfolio in sixth form, the culmination of Elliot O’Donnell’s entire year’s work was spray-painted across the school walls as graffiti. The school voted to allow the submission, perhaps endorsing his future, more subversive, activities.

O’Donnell, also known by his pseudonym Askew One, grew up in Morningside, Auckland. During the 1980s, he was immersed in hip-hop culture filtering in from New York. Adidas stirrup track-pants were popular, breakdancing was “phenomenally huge”, and Smooth Crew—a group pioneering the graffiti scene at the time—were making their mark on neighbourhood walls, arches, pillars and train stations.

“In ’93, I started going out at night, sneaking out of the house and tagging with one or two of my close friends—the local park, the local train station, the stretch of train tracks, all over the school,” he says.

At Auckland Metropolitan College—the city’s ‘alternative’ secondary school in Mt Eden, now closed—O’Donnell met other graffiti artists, such as Tanja Jade Thompson, a.k.a. Misery, and decided that graffiti was something he wanted to pursue as a career, if that was possible. As it turned out, his work since school has been diverse—he published a magazine, organised events, ran an art gallery and set up a music label.

O’Donnell makes a distinction between what he describes as graffiti and a more publicly acceptable form called ‘street art’, produced by “wishy-washy” art school graduates “who haven’t faced the kind of adversities in doing what we do”.

The difference, he says, is in the illegal act of graffiti. The crime, the anti-establishment protest, the troubled journey of the artist, lend legitimacy to the art.

“The majority of graffiti artists have fairly significant rap sheets and run-ins with the law.” Graffiti, he says, is not just a form of self-expression, but an existential statement.

“It’s a very simple message. It’s a message that says, ‘I’m here, I exist’, and it’s a message of wanted gratification and recognition from your peers.

“It’s a very, very raw and genuine human thing to feel, and want to do.”

However, in May 2011, O’Donnell received a wake-up call. It arrived as a “thunderclap headache” which rendered him temporarily deaf and periodically unable to feel half of his face, or arms. He had developed Call-Fleming Syndrome, a rare condition that results in spasms of arteries in the brain, causing temporary stroke-like symptoms—possibly as a result of the fumes from the enamel paint he was using daily.

Recovery has been slow, and O’Donnell remains highly sensitive to paints. When spray-painting, he must use non-toxic paint, work in ventilated spaces, cover every patch of skin and wear a respirator.

The health shock prompted O’Donnell to turn to more conventional surfaces, but this had anunexpected benefit; it gave his work permanence, and led to Smoke Signals, his biggest solo exhibition to date, in March this year.

Large-scale canvases with bold graphics, stark colours and strong graffiti influences debuted on exposed brick walls in Britomart, downtown Auckland. Many of the works used stylised slogans as social commentary, but retained the anti-establishment undercurrent of his illegal work; ‘A fool’s paradise’, ‘Island of promises’, read one.

“A lot of our key artists have always centered around graphic use of type and words. It’s part of the New Zealand painting tradition,” O’Donnell says, quoting Colin McCahon among his influences. “I have a sketch book and I play around with phrases, and they’re kind of like mini-poems in a way, because I try to find the perfect symmetry between letters, the right play on words, and trying to make them as concise as possible.”

The messages might have been the same as his illegal activity, but this exhibition was commercial. The Mayor of Auckland, Len Brown, even called his work “patriotic”. Does that undermine the legitimacy of his art?

O’Donnell believes it still challenges the public. “I got to define myself, I got to show where my work is going, I got to put a value on my work and say to people, ‘This is where I’m at right now.’

“I feel I’ve found a harmony between my background, and I’ve found a place where I can take it, where it comfortably fits within the scope of the New Zealand painting tradition,” he says.

O’Donnell now splits his time between graffiti, fine art, graphic design and directing music videos. Olivia Laita, his girlfriend and business manager, lives with him in their rented warehouse art-studio in Onehunga, reminding him to do “regular” activities, such as walk the dog or call his parents. Together they manage an online shop of his artwork, packaged into accessible formats for his fanbase: T-shirts, prints, silk-screen editions and smaller canvases. He travels regularly to the United States—Miami, New York, Los Angeles and Detroit—to make murals, and also to Australia, Tahiti, Germany, France, Switzerland and Denmark for his work.

He recently contracted to graffiti silos in Auckland’s Wynyard Quarter.

“At the end of the day I’m an artist,” he says. “I’m no different to anyone else, with the exception that a good majority of what I’ve done, I’ve done outside the law.”