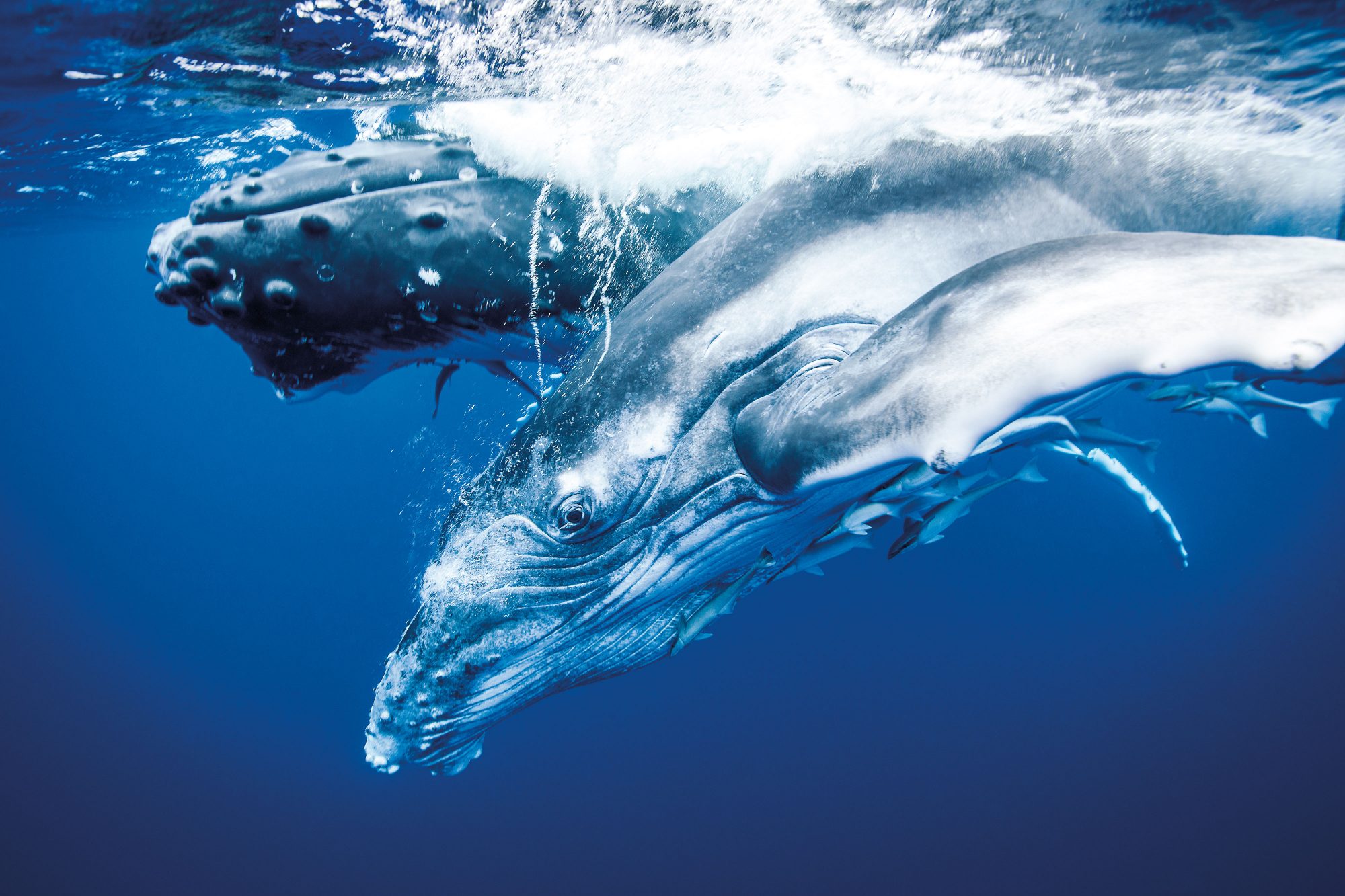 Humpback whales in the southern hemi­sphere migrate every year between summer feeding grounds in the Antarctic and islands in the tropics to breed and give birth, a return journey of nearly 20,000 kilometres. Over its lifetime, a humpback will swim a distance equivalent to the moon and back, twice.

The global conservation status of hump­back whales has now been improved to ‘Least Concern’, but the Oceania sub-population, which includes whales that migrate to New Caledonia, Fiji, Niue, Tonga, Samoa, French Polynesia and the Cook Islands, remains per­ilously endangered. Shore-based whaling in New Zealand early last century took a toll on the species, but the illegal Antarctic whaling activity of the Soviet pelagic fleet during the 1950s and ’60s decimated the population that breeds in the South Pacific—a single factory fleet in the Ross Sea took 12,900 humpbacks during the four-month summer of 1960, approximately four times the population esti­mated in the entire region today.

Encouragingly, the humpback population that migrates up the east Australian coast is growing at more than 10 per cent per year, and those frequenting the breeding grounds of New Caledonia also indicate steady growth of four per cent. But the same is not true of the discrete breeding populations farther east. The total population in New Caledonia, Tonga, the Cook Islands and French Polynesia is esti­mated to be fewer than 4000 individuals. 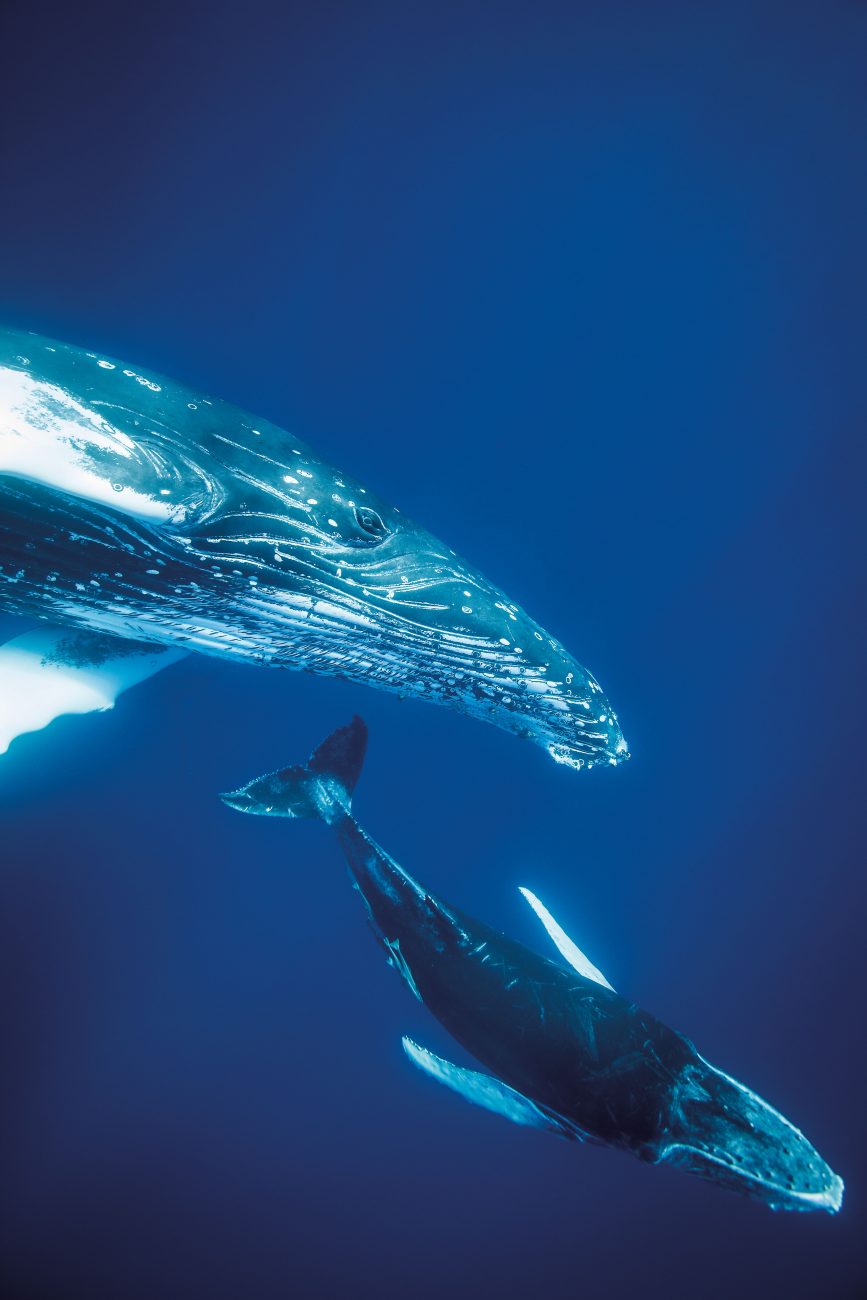 Since 2004, whalers who used to target humpbacks have been co-opted into conser­vation in Tory Channel, at the tip of the Marlborough Sounds, counting the whales as they pass. 2013 is likely to be the last year of the annual project to determine the abun­dance and recovery of New Zealand’s hump­back population. The results to date are inconclusive because of a lack of resight­ings—just one whale has been counted twice, in 2004 and again on the same date in 2008. If there has been any increase in the popula­tion of whales passing through Cook Strait, it has been too small to be statistically sig­nificant. A greater number of whales have been counted in the last two years of the survey (2011 and 2012), which may indicate an increase in the population, but this requires further investigation.

“The more pieces of the puzzle we get,” says DOC marine ecologist Nadine Bott, who has headed the study, “the bigger the puzzle gets.”

Tissue samples collected in Cook Strait by Bott and her team, and analysed by Rochelle Constantine from the University of Auckland, links New Zealand whales more closely with New Caledonia than anywhere else. Work is also planned to determine the origin of numer­ous humpbacks passing Raoul Island in the Kermadecs on their southern migration.

New Zealand’s humpback whales, hit hardest, longest and most recently, have had less time to recover than other populations, and in the absence of future population studies on our coast, we may never know their fate. Recovery may be impossible, or it may just be a matter of time.

Perhaps weeks old, a calf sticks close to its mother in the tepid waters of the Vava’u island group in Tonga. The tropics offer shelter and warmth for the young, but little in the way of sustenance for the mother. She gorged on two tonnes of Antarctic krill a day over summer, converting them into huge quantities of blubber that would sustain her for the next 9–10 months. Now she fasts, every day delivering some 200 litres of milk to her two-tonne calf instead.

The clear warm water that attracts hump­backs to their winter calving grounds also attracts tourists, many who take the oppor­tunity to see the whales. In a region with little land and few natural or mineral resources, whale-watching has become a growth indus­try. In Tonga it’s the single largest income earner in winter months, putting a real commercial value on conservation: a single hump­back whale returning there every year could generate $1.7 million in revenue from whale-watching over the course of its lifetime. 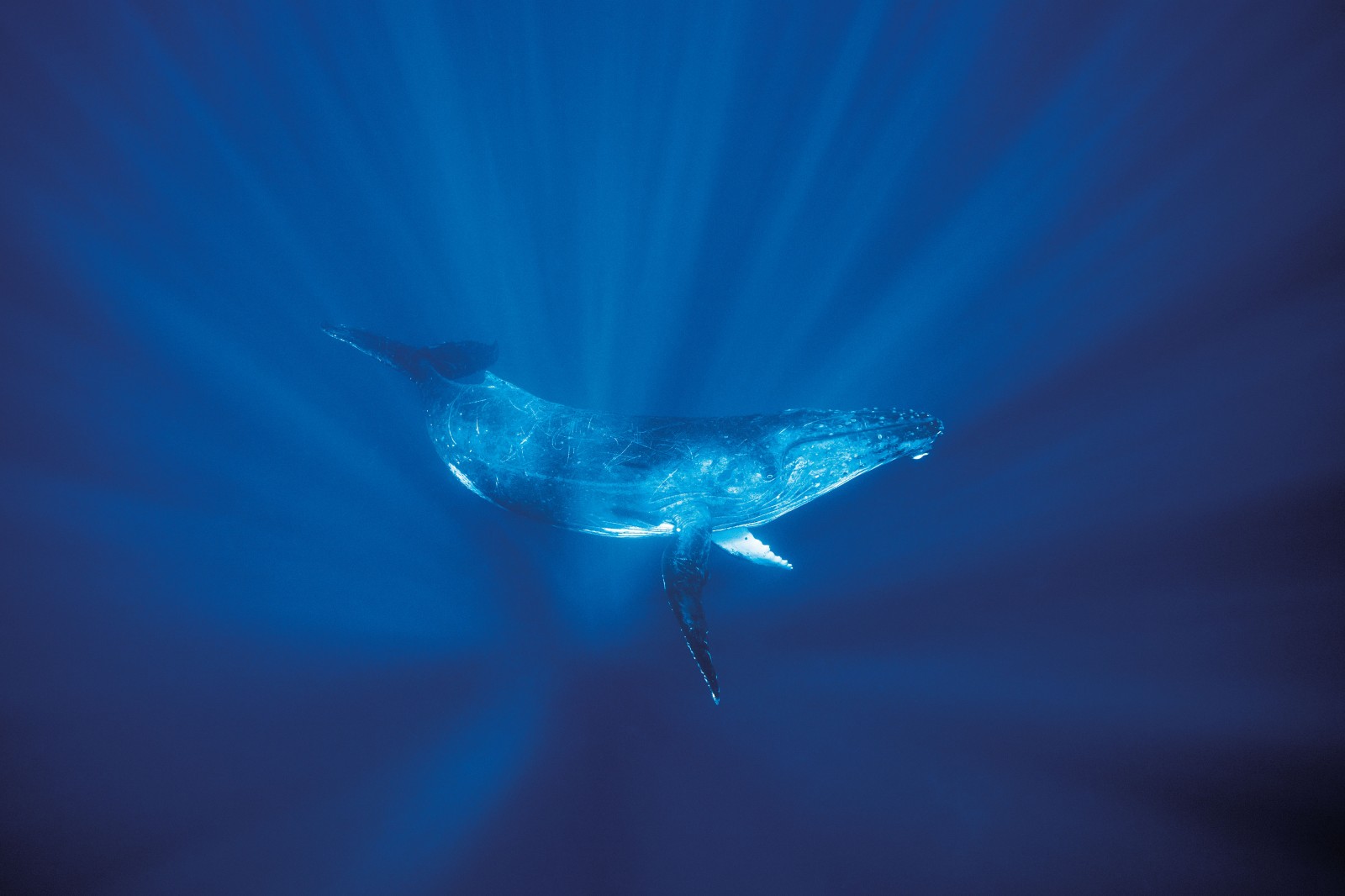 SONG OF THE SEAS

Humpback whales communicate with pulses of sound up to 185 decibels—louder than a jet engine and enough to rupture human ear drums—that can travel thousands of kilometres through seawater. But while all humpbacks vocalise, only males sing the complex songs for which the species is famous, and usually only in calving grounds during the mating period, leading scientists to conclude that singing is primarily used to communicate reproductive fitness.

The ‘notes’ vary in both pitch and volume, but it is the structure of the songs that most interests those studying them. As with human language, there are phrases nested within repeating sentences, which are in turn nested within themes that recur to become a song, up to 30 minutes long and repeated for days.

Whales within a regional population sing virtually the same song—which may be entirely different from other populations—and that song constantly evolves over time. There is also evidence of the transmission of song across the large ocean basin. Over an 11-year period, University of Queensland scientists traced the spread of the song common to east Australian whales in an easterly direction, perhaps indi­cating some mixing and communication between populations. This ‘cultural’ ripple across multiple groups has not been seen to this extent anywhere else in the world.

The songs of the South Pacific will con­tinue to echo through the deep and evolve to reflect the changing nature of the population, as the whales are now protected by domestic legislation in nations across 11 million square kilometres of the great ocean, including the waters around New Zealand.