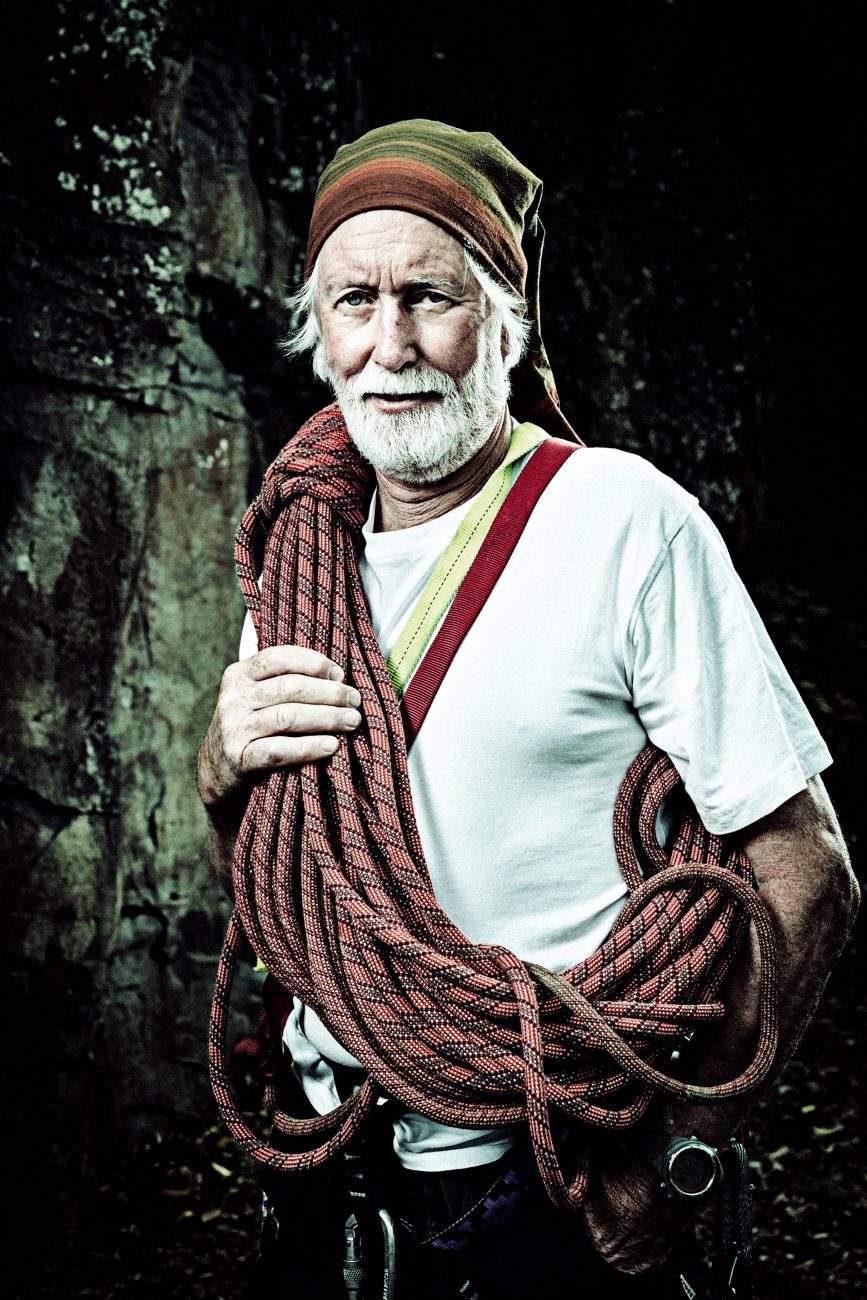 In 1988, one of the country’s best-known adventurers conducted a high-profile social experiment. Graeme Dingle took six young violent offenders on a 33-day, 1200 kilo­metre back-country journey from Picton to Auckland to raise public awareness about alternatives to youth incarceration. He argued that the outdoors—more especially tough, high-adrenalin pursuits in the outdoors—can be a more effective agent for change than a prison sentence.

Dingle’s journey was just the sort of ambi­tious, geography-meets-society story that a start-up geographic magazine could use in its inaugural issue. So we splashed the gritty, gutsy mid-winter trek across 13 pages in Issue 1 of New Zealand Geographic.

Twenty-five years on, I catch up with Dingle at his home in Leigh to ask how the principles of the journey apply to the youth offender programme now run under the auspices of his Foundation for Youth Development. “The principles are the same,” he says. “Strip the kids back. Get the crap out of their lives. Then get them to think about their future in a positive way, and support them to get to that future. We show them that they’re not useless, that they can amount to something. There’s still lots of outdoor activity, team-building stuff, but we also work with the family where possible, and partner the kids with mentors who can take them into further education, a job, or training”

As well as offering programmes for kids who have slipped through the cracks, Dingle’s Foundation—which he established with his wife Jo-anne Wilkinson—runs Kiwi Can, a school-based life skills programme that starts with five year olds and goes through to the end of intermediate school. Then they have a programme called Stars, which targets students in their first year at secondary school with a view to stopping them dropping out of school. An important part of this programme is training senior students to be peer mentors for the younger children. Project K—Dingle’s original youth programme, launched in 1995—is specifi­cally for “wobbly” year 10 students: 14- and 15-year-olds whose self-belief (Dingle uses the term “self-efficacy”) needs shoring up.

Fifty-odd years ago, Dingle was one of those kids. Spindly, painfully shy, constantly bullied, there wasn’t a lot of self-efficacy to be found in the youngster who would one day criss-cross the globe knocking off one auda­cious adventure after another.

Goal-setting is one of the core lessons of Dingle’s youth programmes, but he went through his school years without anyone showing him how to do it. “Setting goals is fundamental to being human,” he tells “Not just having a goal, but knowing the process of how to achieve it, by stating objectives.”

Dingle says he discovered the process after stumbling upon a story about speed-tramping in the Tararua Ranges. It featured ‘Cyclone’ Doug Sinclair, one of a group of velocity freaks referred to in the tramping community as “hissers”.

“I thought I’d like to do that,” says Dingle, “so I wrote down a goal: do a southern crossing of the Tararuas in less than Cyclone Sinclair’s time of 7 hours and 16 minutes. Then I thought, ‘So how will I know if I’m achieving it?’ Well, if you’re on top of Marchant Ridge in under an hour, get to Alpha in under two hours, and so on, you could see if you were doing all right. And that’s what I did. It was a huge lesson. After that, if I couldn’t write down the steps to achieving a goal then I wasn’t going to tackle it.”

Dingle’s time for the crossing was 6 hours 31 minutes. Two years later, for his 20th birthday, he set another record, running the length of the Tararuas in under 20 hours. At 23 he was making first ascents in the Peruvian Andes and, for relaxation, descending the upper Amazon in a balsa log raft. At 24 he made the first ascent in a single season of all six classic European north faces (including the Matterhorn and Eiger).

In 1971, when Dingle was 26, a seemingly trivial comment challenged his priorities. He and Jill Tremain were a quarter of the way through the first complete traverse of the Southern Alps—a 100-day journey they undertook in winter to add spice to the adventure. Out of nowhere, Tremain said, “You know, Graeme, life is a cup to be filled, not a measure to be drained.”

“She was always coming out with stuff like that,” he says. “She wanted to help me learn a lesson, and she did.” Reflecting on the moment in his 2005 autobiography (simply called Dingle), he wrote that Tremain’s words made him realise he had been living “the wrong way around, gulping down the elixir of life before fate stole it away”. Her challenge was to fill the cup for others.

Three years later, Tremain was swept to her death by an avalanche in the Himalayas. Dingle was in Nepal at the time as well, making a film with Ed Hillary. He lost one of the most influential people in his life, but the youth work that is his legacy has its roots in that casual remark near Mt Aspiring.

For Dingle, exploits in the outdoors are as much about teamwork as they are about physical achievement. He speaks warmly of the bonds that form when people place their survival in the hands of others. That said, some of his most treasured journeys have been long, arduous, solo undertakings. His 4000-kilometre transit of the Northwest Passage by snowmobile—the first by that mode of transport—was as much a quest as a trek. He was looking for “Athena’s door,” he says, seeking a deeper dimension of wisdom and loving.

Like many extreme adventurers, Dingle is candid about mystery: the life-saving moments of intuition, the flashes of clairvoy­ance, in his case even physically shaking with a psychic visitation. He’s pragmatic about it—thinks it’s something science will one day figure out—but that doesn’t diminish its reality. He spoke about a time in 1985, on the west buttress of Everest.

“We had climbed up to the shoulder and then came down the buttress to camp. I told the others, ‘If I can’t get into a hole tonight I’m going down to the valley’,” he says. “The avalanche danger was high, and I didn’t like the idea of spending a night in a tent in the open. I spotted a small crevasse and climbed down inside, and there was a platform big enough for all of us to sleep on. We got in there, turned on the radio and the BBC was reporting that the French had just sunk the Rainbow Warrior. So we decided to ban all French words from our vocabulary—though of course when you do that in mountain­eering you can’t say very much. We went to sleep, and just after midnight the whole place started shaking and everyone sat bolt upright and shouted a single French word: Avalanche! It took out the whole buttress—camp, fixed ropes, the lot. That hole saved our lives.”

Dingle thinks this kind of intuition is strengthened by the relationship a person has with the environment and the under­standing that everything is connected—the concept of Gaia. “People don’t seem to think much about that these days, and it’s a real shame,” he says. In his autobiography, Dingle writes: “The Gaia is resilient, but not endlessly so. We mess with it at our peril.”

There’s a humility in this approach to the outdoors, one that the adventure community doesn’t always manifest. The conquering hero remains an entrenched motif, but not always a helpful one. “I’ve never thought of mountaineering as a conquest or even a struggle against the mountain,” he writes. “The wild places of the planet are never hostile. They are simply wild.”

I ask him what has changed in the adventure landscape since he started out. “The existence of fast travel, of helicopters, improvements in equipment—these have made hard adventure more accessible. But the essence of it hasn’t changed,” he says. If anything, it is people who have changed We’re not as tough as we used to be. When you look at what Amundsen, Falcon Scott and their guys did, people can’t do that stuff any more.”

For an increasing number of New Zealanders, adventure is a product to consume, not an experience to create.

“If you’re a passenger in the jetboat, if you sit in the raft while someone paddles you, if you dive off the platform where someone else has tied the elastic to you, you’re only getting a minor part of the experience. Growth comes from achievement, and no one can achieve on your behalf.

“I constantly worry that kids aren’t taking enough risk. It’s very hard when you get tragedies like Mangatepopo or Paritutu [outdoor education fatalities] to keep saying that people need to take risks if they are to grow. But it’s true. It’s an invaluable skill to feel scared but to still go on. The most important thing is that the leader isn’t having an adven­ture. Like an airline pilot he or she must be in perfect control.”

Dingle still practices what he preaches. In 2015, he and Wilkinson plan to mark the centenary of the Gallipoli landings by kayaking the Dardanelles and landing on the beach at dawn. “Jo-anne also wants me to guide her to the summit of a 6000-metre peak,” he adds.

“How would you do that?” I ask, betraying a slightly incredulous tone—the guy’s pushing 70, after all, and his hair and beard are snow-white. Dingle shoots me a bemused glance. “I climb every week,” he says. Either indoors on a climbing wall or on the basalt sea cliffs at Ti Point, near his home, where he has put up more than 40 routes. “I can still climb, mate!”

I look at him. Barrel chest, wiry frame, pair of climbing shorts and a T-shirt. I feel reproved. The skinny kid’s still on a journey.