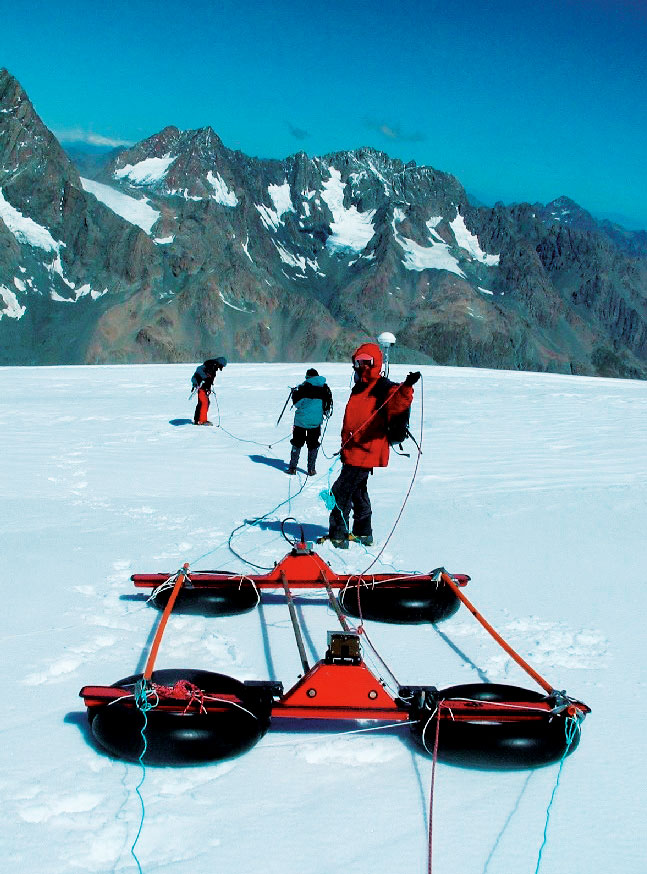 Old snow can tell us a lot about the past. As snowflakes fall, they collect whatever particles are in the atmosphere at the time—dust, volcanic ash, smoke, pollen. Then, as the snow accumulates and turns to ice, it freezes with it a record of what the weather was like dozens, even hundreds, of years ago.

“So, if you find pollen from West Coast vegetation, it might tell you that there were strong winds coming in from the mountains,” says GNS Science’s Ju­lian Thomson, who is managing the team of scientists drilling for ice cores in the Southern Alps. “If it’s pollen from the grasslands, it might tell you that there were easterlies or southerlies. You might even get dust from Australia from really strong westerlies. It might indicate a sea­sonal cycle of westerly winds, but if you find that over a number of years, those winds are increasing or decreasing, and the story becomes more interesting.”

When New Zealand Geographic spoke to Thomson, he was hunkered down in a hut in Mt Cook National Park. He and his team were waiting for a break in the weather so they could set up camp on Annette Plateau, where they would begin collecting ice cores. They hope to collect them from a number of sites and from al­titudes ranging from 2200 m to 3000 m, which will be brought to the surface in lengths of around one metre, and 10 cm in diameter. In ideal conditions, the sci­entists could retrieve up to 50 m in a day, although a more likely target is 20–30 m. The cores will be stored in custom-made chilly bins on the mountain, then airlifted off and taken to a walk-in freezer at The Hermitage hotel, before being delivered by truck to GNS Science’s ice core-processing facility in Lower Hutt. The facility stores cores at minus 35ºC—the scientists who work there wear Antarctic gear—and is currently housing 800 m of ice cores from Antarctica and another 100 m of samples taken from South Is­land glaciers in 2004.

In this earlier project, Thomson man­aged to drill as deep as 50 m, about half way to the bedrock. The team have now set their sights higher—or more accu­rately, deeper. “The bed rock is the goal,” Thomson says. “We think we may get there…although we’re prepared to be dis­appointed.” Asked how old he expected the ice at the bedrock to be, he wouldn’t be drawn. “We want to get samples that pre-date weather-station records, which was about 150 years ago. If we got to 200–300 years ago, we’d be thrilled.”

Ice-core samples from the Southern Alps are unlikely, from a scientific point of view, to be of the quality of the ice cores taken from Antarctica. It’s just not cold enough. However, samples from New Zealand “would be a significant contribution to the climate-change story”, says Thomson. “There’s a big blank on the map because there aren’t many other places around where you can get ice cores—the closest would be South America. So we end up with the Southern Alps and have to get what we can. And now is the time to get these ice cores because those glaciers are definitely melting.”