Recent atmospheric effects resulting from the devastat­ing bushfires in south-east Australia show how close New Zealand really is to its trans-Tasman neighbour.

On January 31, a strong north-westerly flow carried plumes from the bushfires across southern New Zea­land before they had time to disperse. The morning sky was noticeably darker than normal, and had a strong reddish cast around 10 A.M. Scientists at the National Institute of Water and Atmospheric Research facility in Lauder, Central Otago, recorded the visible effects with an “all-sky” camera, and also noted a large increase in aerosols and trace gases.

Situated in the midst of farmland, the Lauder facility has kept a watchful eye on the New Zealand atmosphere since the 1960s. Although set up originally to study the Aurora Australis, it has since played a significant role in global efforts to understand the causes and effects of ozone depletion. It is one of just five sites in the world which make up the international Network for the Detection of Stratospheric Change (NDSC).

In recent years Laud­er’s between ozone depletion and other facets of global climate change, such as temperature increases associated with the build-up of carbon dioxide, methane and nitrous oxide.

It was another gas, nitro­gen dioxide, which was re­sponsible for the red skies on January 31. Nitrogen dioxide is generated in the atmos­phere when the two main components of air, oxygen and nitrogen, react at high temperatures, such as those created by a bushfire. The gas absorbs light in the blue part of the visible spectrum, resulting in a reddish tinge to the sky when it is present in high concentrations.

Nitrogen dioxide is a crit­ically important gas in both ozone depletion and climate change, and its concentra­tion in the atmosphere has been measured continuously at Lauder for two decades. (The same gas is produced in vehicle exhaust, and con­tributes to the brown haze of urban air pollution.)

Soot particles from bush-fires, including black carbon and hydrocarbons, also absorb light, and may have contributed to the darken­ing of the sky on January 31, but are less likely to have been the cause of the strong red colouration. 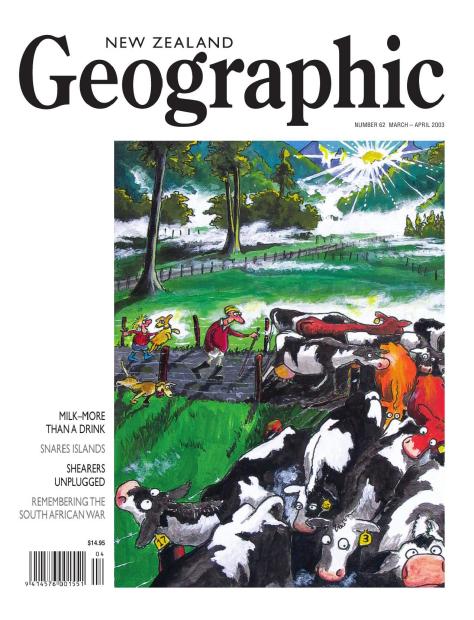