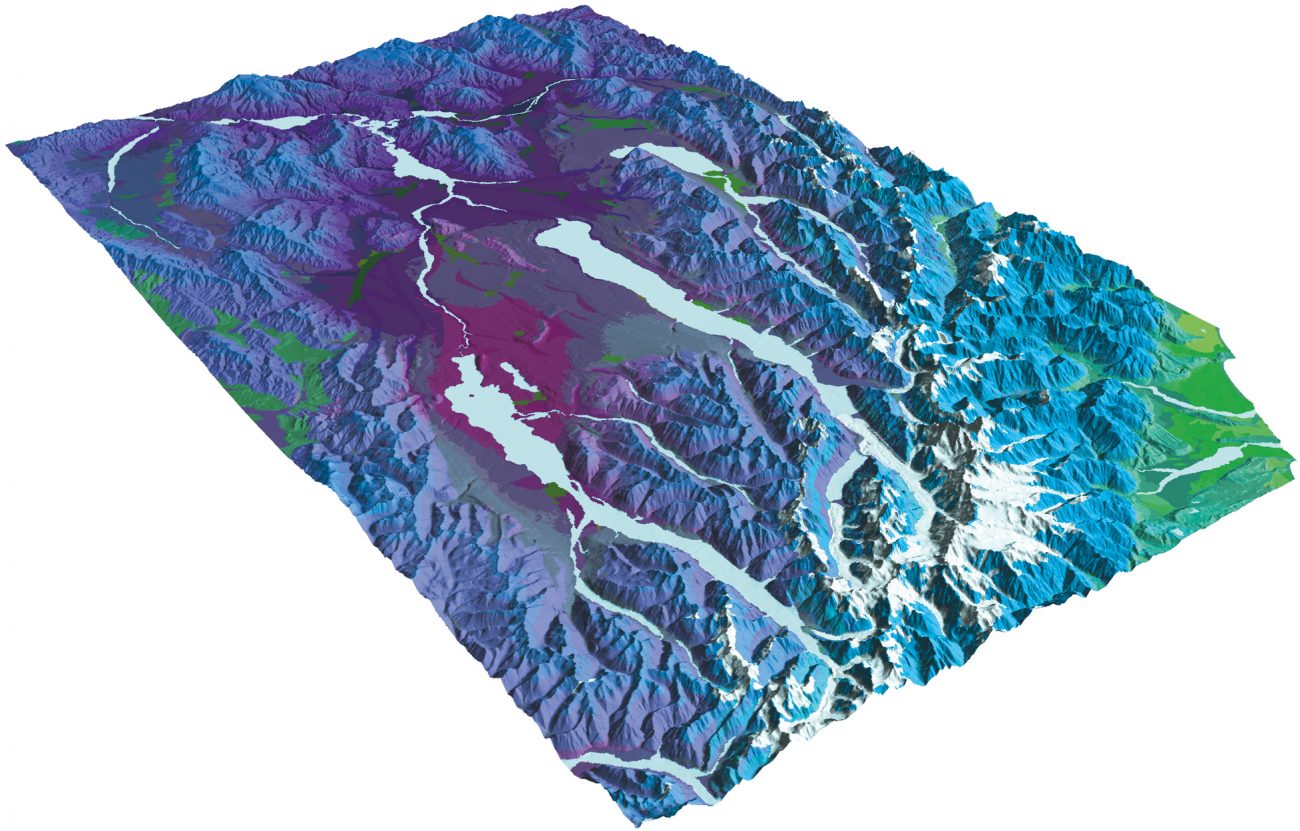 Scientists from Land Care Research in Hamilton and the Ministry for the Environment have developed a new way of looking at New Zealand’s environments, and it is winning awards overseas. Rather than mapping vegetation types or landforms, the new classifica­tion, called LENZ (Land Environments of New Zealand), is based on conservation, biodiversity and resource management.

The team involved in the work—John Leathwick, Gareth Wilson, Daniel Rutledge, Fraser Morgan, and Malcolm McLeod­ started with a digital terrain map of the country, and used this to derive a slope layer, the first of 15 data sets or layers used in the classifica­tion. Among the other layers are seven sets of climatic data, including annual and winter solar radiation (indicating how much light is available for plant growth), mean annual temperature, mean minimum temperature of the coldest month (a frost indicator), annual soil water deficit (an indication of whether drought is likely to be a factor), average monthly ratio of rainfall to evapora­tion (an indicator of how wet a site is) and vapour pressure deficit (a measure of the dryness of the air).

To the climatic informa­tion the team added seven landform parameters: drainage, age of soil forma­tion, levels of phosphorus and calcium (important indicators of soil fertility for plants), parent rock resist­ance to weathering, particle size at the depth where rock and soil meet (this determines speed of soil formation and nutrient release), and chemical limitations to plant growth (such as highly saline or ultramafic soils, where only certain plants can grow).

All of these data layers were combined and analysed in a numerical classification program that grouped sites with similar attributes into environments. The program delivered 800 such environ­ments—too many to be handled practicably. To make the results more manageable, the similarities between all of the environ­ments were calculated and the most similar pairs were merged. The result is four master sets of environments, ranging from a 500-environ­ment set for the most detailed viewing of small parts of the country to a 20-environment set suitable for mapping the whole country.

To improve the resolution of the final products, every point on both a 100 m by 100 m and a 25 m by 25 m grid across the whole country was assigned to an environ­ment at each of the four levels. The distributions of the four sets of environments can be plotted in a geographic information system to produce actual maps, but were designed primarily as a framework for councils and governmental organisations which monitor and report on the state of New Zealand’s environment.

What does the LENZ classification have to offer that the old vegetation maps don’t? An ability to peer back in time, for one thing. Over large tracts of the country, native vegetation has been replaced by grassland, introduced forest or scrub, making it hard to know what once grew there. By identifying environment‑mentally similar sites with indigenous plant cover intact, this new tool can give a very good indication of what the original plant communities would have been like at any location.

Suppose a rare native lizard is found in a particular environment, but is under threat there. The LENZ system can identify similar areas elsewhere, where the lizards could be transferred to start a fresh population. The system can also help those trying to limit biosecurity breaches. With the southern saltmarsh mosquito (carrier of the debilitating Ross River virus) currently established around Hawkes Bay, Poverty Bay and the Kaipara, LENZ can identify other warm saline habitats to which the mosquito might spread.

Want to produce Bordeaux-type wines in New Zealand? If you know the soil and climatic details of the Bordeaux region in France, with LENZ data you can determine the location of all environmentally similar areas in New Zealand. Two books on LENZ are being published: a broad introduction to environmen­tal classification that will

contain general information on New Zealand’s climate and landforms, and a more detailed technical guide for serious users. However, the main output of the project will be the LENZ digital dataset, for use by those with system (GIS) software: regional councils, DoC, MAF, geographers, agriculture and forestry companies. For such groups, LENZ should prove an invaluable tool for years to come.