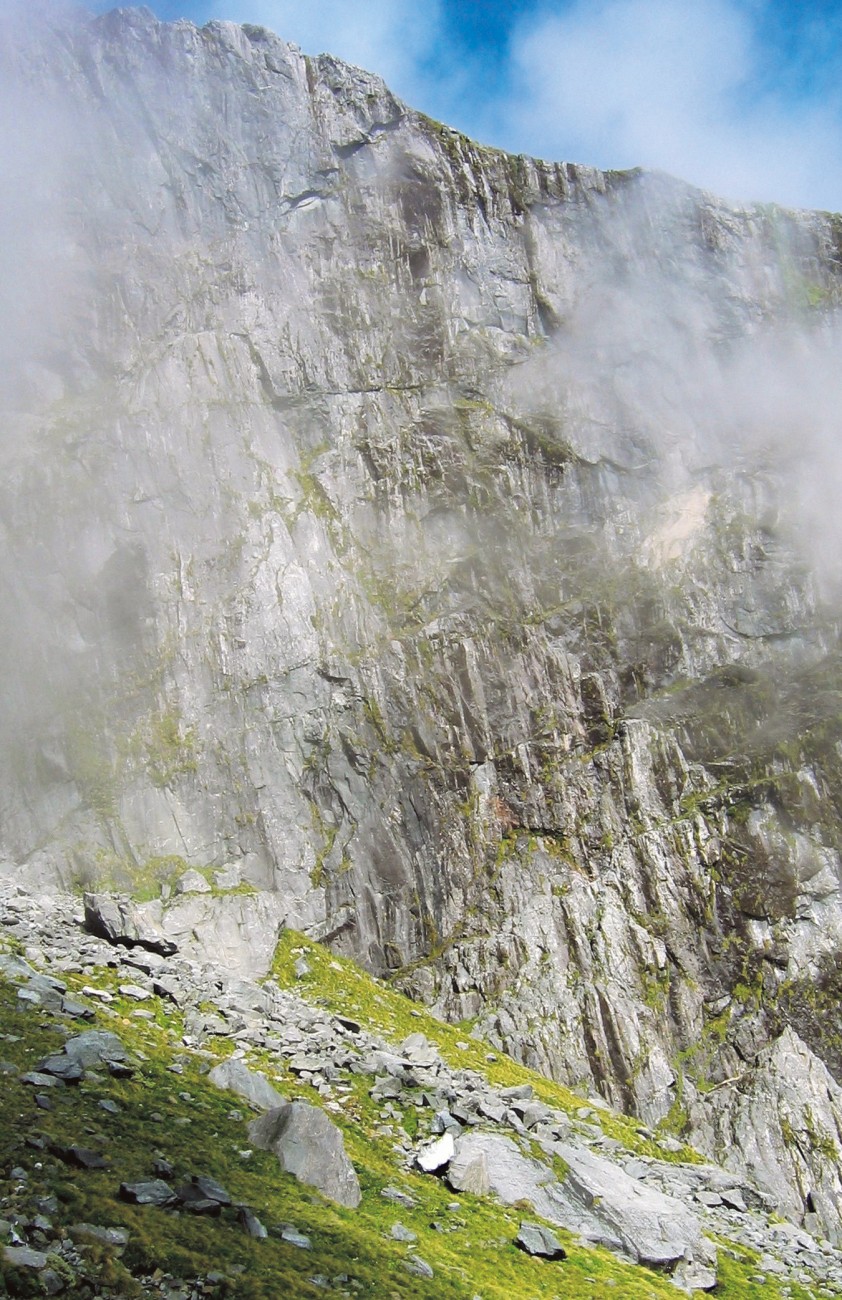 Our knowledge of the diversity, distribution and ecology of these high-altitude lizards is surprisingly sparse, and new species are being found on a regular basis. Recent examples include the small-eared skink (Oligosoma stenotis) from Stewart Island and the Paparoa skink (Oligosoma sp.) from Westland. But nowhere are new discoveries more frequent than in the Otago–South­land region, where a spate of recent lizard finds has revealed a diverse and delightfully colourful alpine lizard fauna.

In 1996 a chance discovery was made in the Takitimu Mountains of Southland of a bizarre new gecko. The Takitimu gecko (Hoplodactylus cryptozoicus) belongs to the forest-gecko (Hoplodactylus granulatus) species complex, a group usually confined to forests and shrub lands, yet in this instance a small popula­tion was found thriving in alpine scree. The discovery prompted the herpetological community to focus on the alpine zone of the South Island, until then largely neglected. H. cryptozoicus is now known to oc­cupy alpine rock bluffs as well as the more usual montane beech forest of Southland.

So far, Takitimu geckos have been studied only at the scree site where they were discovered. Here they seem to live deep under the surface, but on warm nights small numbers (mostly sub-adult males) will emerge onto the surface, or climb among the “islands” of short alpine vegetation on the scree. Adults are very rarely seen and appear to prefer a wholly sub-surface existence. Some of these geckos are coloured bright orange, and they all have a distinctively short tail.

The first specimen of the Roys Peak gecko (Hoplodactylus sp.), a particularly gaudy individual—dark grey with white stripes and brilliant asymmetrical spots of orange—was discovered in 1998 near a popular walking track close to Wanaka (see New Zealand Geographic, issue 38, p. 10). More specimens were found in 1999, and another was found earlier this year, although none as brightly coloured as the first.

Roys Peak geckos tend to live under house-sized boulders and are almost impossible to detect by day. On warm nights they sit out on the boulders, but at altitudes of 1400– 1600 m warm conditions are rare. It took three expeditions for research­ers to strike sufficiently high temper­atures to add to the initial find.

The next alpine discovery was the Moke gecko. The verdict is still out on whether this is a new species or a local form of the Roys Peak gecko. Efforts to study its relationships have been hindered by the fact that only two specimens have ever been found, and these at widely separate localities. The first specimen—one of the largest living geckos ever recorded on mainland New Zea­land—was found near Queenstown in 2002. A second specimen, a juvenile, was discovered in the Rees Valley in 2004. The Moke gecko appears to occupy a habitat similar to that favoured by the Roys Peak gecko, but it is much larger and much more robust than its cousin, with minor differences in scale pat­terns and colouration.

In 2003, a third Otago alpine gecko was found in the far north of the Dunstan Mountains, and in February 2005 what appears to have been another specimen of the same type was found at the southern end of the Dunstans, above the Cromwell Gorge. The Dunstan Mountains gecko is much bigger than the Roys Peak animal and is magnificently coloured. When first encountered in the wild, it is typically dark pinkish-brown with orange overtones, but it responds rapidly to warm fingers by turning pale grey. Most specimens have at least a few asymmetrical spots of bright orange and yellow, and some are a veritable riot of colour.

The next two alpine discoveries make a complex and tangled affair yet are perhaps the most significant so far in southern New Zealand. In 1966 Thomas Choate wrote to the chief ranger of Fiordland National Park: “On a trip to the Homer area yesterday I made what appears to be an important biological discovery…I caught [a skink] at 4000’ elevation on Students Peak. It appeared to be a new species…” Choate wrote that he had collected the specimen, but no museum specimen with indisput­ably corresponding data has ever been found. Students Peak is in the upper Hollyford valley, just south of the Homer Tunnel.

Jump forward 37 years to 2003, when rock-climber Craig Jefferies was hanging from a rope 200 m up a vertical, and in places over­hanging, rock wall in Sinbad Gully, below Mitre Peak (1300 m a.s.l.). Jefferies captured a gecko that his climbing partner dislodged from a crevice higher up the cliff. As soon as Jefferies’ camera had clicked, the gecko jumped, but the blurry photo and the climber’s description of the gecko were enough to get herpetolo­gists very excited. This was only the second verified sighting of a gecko in deepest Fiordland, the other being of a juvenile collected in 1974 by Rod Morris in the Esperance valley. Morris’s specimen was a beauti­ful creature and almost certainly a new species, but further finds were required before a formal species description could be made.

In February 2004, a team of herpetologists, accompanied by a gecko-sniffer dog, were airlifted to the base of the climbers’ wall in Sinbad Gully. After just 20 minutes of rock lifting, a remarkable skink was found. Glossy black with bright-green flecks on top, it had a bright­orange-red belly and very long tail and toes—clearly a completely new species. Repeat searches of the site have since been made but have failed to find any further sign of the skink or, indeed, of the gecko sighted by Jefferies. We are quite certain that the skink, like the gecko, came from up the rock wall.

Spurred on by the Sinbad skink, we re-examined the few examples of Fiordland skinks in Te Papa (the primary depository for New Zealand lizard specimens) and may just have identified Choate’s Students Peak find. The specimen in question was definitely collected by Choate and added to the collection in the 1960s, but it has no original locality data. In the collection register, a cura­tor has written “possibly from the Milford area”. Confirmation of where the specimen came from may now be impossible, but it makes a close match with the Sinbad skink. The main difference between the two is belly colour, the Choate speci­men having a grey belly with black flecking.

The next significant find fol­lowed 18 days of fruitless searching in Fiordland over the summer of 2004–05. When the dismal New Year weather finally gave way to a heat wave in mid-January, a small population of geckos was found in the extensive alpine habitat around the Homer Tunnel. These so-called Darran Mountain geckos were living in a system of creviced but stable rock bluffs nestled between snow pockets, avalanche shoots and dan­gerously active boulder shoots. They are further members of the forest-gecko complex but seem unrelated to the Otago–Southland animals, having more in common with the Esperance valley species and geckos from Westland.

Just days after the Homer Tunnel discovery, and during the same spell of hot weather, rock-climbers Bron­wyn and Murray Judge encountered both geckos and skinks on Barrier Knob, 4 km north-west of the tunnel. Despite climbing in the area for over 30 years, Murray had never come across lizards before.

The Judges saw the geckos and skinks in creviced rock, only metres above a semi-permanent ice wall, at over 1700 m a.s.l. This is perhaps the coldest environment in which lizards have yet been found in New Zealand. Going on photographs the Judges took, and sloughed skins they collected, we believe the Barrier Knob geckos to be the same as the Darran Mountain animals, and the Barrier Knob skinks, both of which had grey bellies, to be a match with the Choate specimen.

In total, five new kinds of gecko have been discovered across southern New Zealand since 1996, some or all of which will ultimately be described as new species. The Sinbad skink also represents a new alpine species. Given the current rate of discovery, it seems likely that yet more mysterious alpine lizards will eventually emerge from the misty tops of our southern mountains.