Picture the moa. A flightless feathered giant, reminiscent of an emu or cassowary.

Over the last decade, genetic and skeletal evidence has begun to trace its family tree back to the age of the dinosaurs. Some 80 million years ago, the first ratites—the ancestors of today’s kiwi, emu and cassowaries—emerged.

But the closest cousins of the moa were not kiwi, nor the cassowaries next door, but appeared to be an odd family of quail-sized birds an ocean away.

The ground-dwelling tinamou is found across Central and South America, and can fly (although it prefers not to).

With such a relationship, you would expect these birds to have some morphological similarities. But these have eluded scientists—until now.

It was a serendipitous discovery. A research group at Flinders University in Australia were investigating the enigmatic cassowary, a rainforest-dwelling titan from northern Queensland. 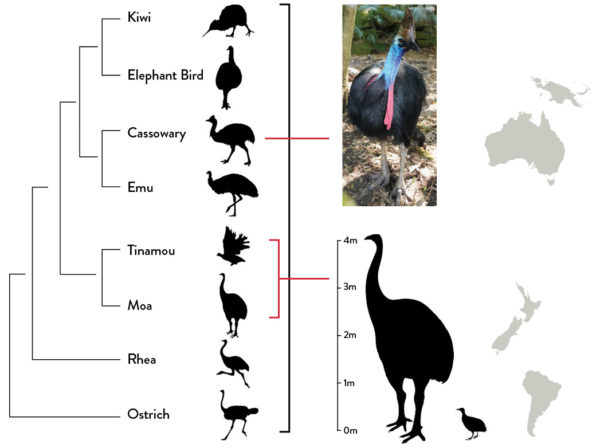 “Scanning lets us see details that we wouldn’t be able to otherwise, including the shapes of internal structures, without causing damage to them,” says the lead author on the paper, PhD candidate Phoebe McInerney.

As part of the investigation, the team also imaged the throats of other birds in the palaeognath (“old jaws”) family, an ancient lineage separate to all other living birds. They found that tinamou and moa had comparable throat anatomy—a morphological similarity that can’t be seen in skeletons. The tinamou and moa were singing the same tune after all.

The discovery further disproves “Moa’s Ark”—the idea that moa have inhabited Zealandia since the time of Gondwanaland. Instead, it’s possible that the moas’ ancestor flew to Zealandia from America (perhaps via Antarctica) after the southern continents drifted apart.