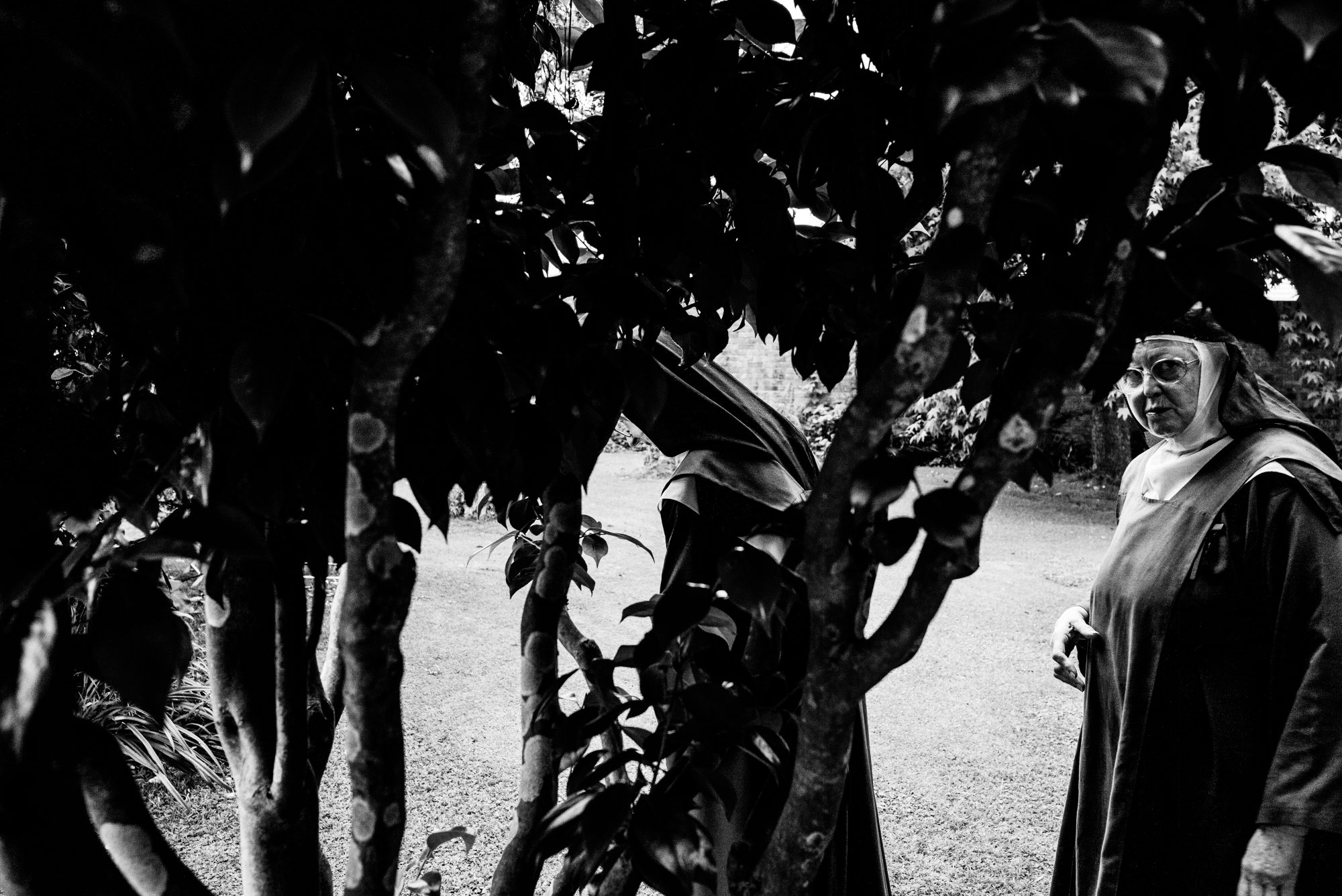 A mossy brick wall and wire gate divide the world from Auckland’s Carmelite monastery, in the stretch of Mt Albert Rd between Royal Oak and Three Kings. Suburbia has engulfed the villa since seven nuns from the Dulwich Hill Monastery in Sydney moved here in 1937, but for the women who now live within the high walls, rarely venturing out, it is still a place of peace, contemplation and communion with God.

The 14 nuns range in age from 23 to 83 and live almost completely cut off from the outside world. When I first visit with photographer Cam McLaren, we are separated from the monastery’s interior by a metal grille. The public area includes a chapel and a visiting room, furnished with plain wooden chairs; on the other side of the bars are Sister Mariam and Sister Francis, wearing the black veils of nuns who have made a lifelong commitment. They’ve hardly left this place in half a century.

The outfits are identical, but their personalities aren’t. Sister Mariam is more reserved, with a quiet dignity that befits her role as prioress, the democratically elected leader of the community. Sister Francis reveals more of herself. She is quick to laugh and to tear up—sometimes at the same time—and is an enthusiast, interested in history, science and nature. One of her embroidered scenes hangs in the nuns’ dining room: it shows the Virgin Mary, patroness of the Carmelite order, in a sandy New Zealand bay fringed with flax and ponga, the Southern Cross sparkling above.

Monastery life doesn’t iron out quirks or interests, she says. “Carmel is not meant to crush us, we’re meant to come to full life.”

Growing up Catholic, Sister Francis says she knew from the age of 12 that God wanted her. “That was just too mind-boggling, so I put it in the back of my head,” she says. “I wanted to get on with enjoying life.” 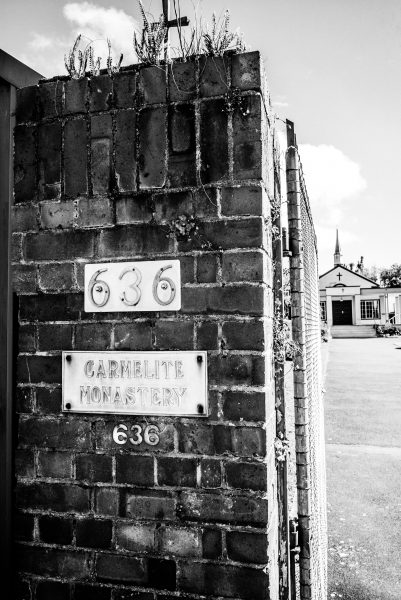 She left school at 15 and worked in an office, a shop, a coffee lounge, as a dental assistant and a nurse. None of it gave her a sense of meaning, and the ‘tug of God’ had not gone away.

“When I got to 19, I thought, ‘Okay, Lord, I could spend the rest of my life running away from you, or I could give the convent a try and hope I’m back in the world before too long’.”

Her parents made her wait until she was 21—“and that is very sensible, because coming to religious life must be a mature decision. We’re not here to pull people in unexpectedly and brainwash them.” She entered the monastery two weeks after her 21st birthday. She’s been here ever since, leaving behind her childhood name and choosing Francis instead, after the animal-loving saint from Assisi.

“Nuns have an inward calling—it comes when you’re fairly young,” says Sister Mariam. “You just get this inexplicable feeling that God wants you. If you have a social life and go out to parties and such, suddenly it just seems so hollow and boring that you can hardly bear it. And on the other hand, you feel a fascination for everything that has to do with religious life.”

Sister Mariam came from an “ordinary Kiwi family” on Auckland’s North Shore.  “Dad loathed seeing us near a church,” she says. At 15, she experienced a sudden and overwhelming conversion.

“It’s very hard to describe—it’s like suddenly the wool being taken from your eyes and you see things as they really are.”

She began to sneak out of the house to attend the Baptist church up the road—“My parents didn’t know what I was up to.” When, later, she came across Catholicism, she felt immediately at home, and when she read about the order of the Carmelites, something resonated.

“It seemed so radical,” she says. “I was young and I wanted to be radical.”

To voluntarily imprison oneself, to choose to live on a patch of suburban ground of less than a hectare, to renounce not just romantic love and material wealth and a career, but wild places, sunsets over mountains, swimming in the sea. To spend the day in silence, and live, instead, an expansive inner life of prayer and meditation. These are radical ideas.

Nuns have been a feature of New Zealand life since the Sisters of Mercy arrived in 1850 and began to nurse the sick and educate the poor. There are many different orders, each with its own rules and lifestyle—the Dominicans, the Sisters of Compassion, the Sisters of St Joseph of Nazareth—but the Carmelite order is among the most restrictive.

Carmelite nuns do not teach or engage with the community—their contribution is made through prayer and personal holiness. Guests are rarely allowed beyond the grilles, and the nuns venture out of seclusion only when strictly necessary—for doctors’ appointments, or to visit one of the sisters currently living in rest-home care. One ‘extern’ sister has a more outward-facing role; she runs the office, receives visitors and mediates between the nuns and the outside world.

The Carmelite order was established in the late 12th century, in what is now Israel, by a group of hermits—probably ex-Crusaders—living on Mt Carmel. Expelled from the Holy Land a century later, they established monasteries across Europe, including some for women. In the sixteenth century, St Teresa of Ávila, a Spanish nun and theologian, reformed the order, creating the secluded lifestyle followed by New Zealand’s Carmelite monasteries in Auckland and Christchurch.

Each day begins at 5.50am, when a 150-year-old bell rings to rouse the nuns for dawn prayers. There’s Mass at 7.30am, breakfast, a few hours of work—gardening, cooking, cleaning, making altar breads. Prayers before lunch, siesta (St Teresa was Spanish, after all), three more sets of prayers, and then, from 8pm, “the Great Silence; no talking at all unless the monastery’s burning down”, says Sister Mariam.

Nuns mostly keep their silence, except for during their two hours of free time, where they embroider or weave baskets and can talk as much as they like.

In the evenings, they’re supposed to pray or read in their bedrooms, called ‘cells’, until lights-out at 10pm. 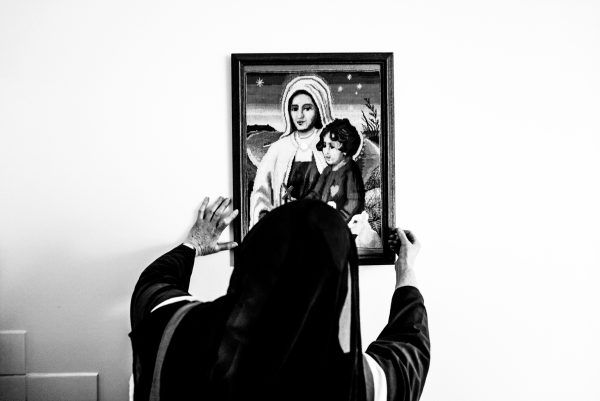 “Well, not always by then,” says Sister Francis, giggling. “That’s the time when I really want to read. But I’m behaving myself a bit better now.”

There are, of course, disagreements—nuns are human, and holiness is a work in progress. “We are all like rough stones in a small bag polishing one another, and it can hurt—we do bring our defects in here with us,” says Sister Francis.

Trying to shed oneself of those defects is part of the work of being a nun. Prayer, though, is the main thread that runs through the Carmelite life, prayer in all its forms: singing psalms, divine reading, meditative contemplation, Mass with the whole community, or cosy time alone. But it’s not all revelation and wonder.

“It can be difficult, occasionally there can be times of deep pain in prayer,” says Sister Francis. “There are times of dryness too, when you can’t think a good thought, your mind might be busy. Each day, you can find yourself back at stage one. It’s not all on the mountain-top.”

Self-improvement and an individual relationship with God aren’t the only goals of prayer. “We’re meant to pray for the whole world,” says Sister Francis. “We hear about the disasters that are happening, and not everyone can race over and help. It’s all in God’s hands and if we give everything to him, he can deal with it. So that’s ultimately what our life is about.”

The Carmelites also take orders. The requests arrive daily, by post, email, or left in the chapel after the Sunday Mass.

“You’d be surprised the problems people have,” says Sister Mariam. “They get on the computer and send us prayer requests from all over the world. There’s a lady from Sri Lanka, she has family problems with her husband and little girl, and she sends long emails with every little problem. I just pray for her without replying now.”

On my second visit, I am allowed through the dark wooden doors into the labyrinthine kauri villa at the heart of the monastery. Built in the 1870s, fretted with wooden lace, it’s where the nuns cook, eat, meet and work. There’s also a small chapel, where they spend many hours at prayer, a garden shed where they melt down donated candle ends to make new ones, and a long dormitory of tiny, austere cells, each with a desk and a single bed. Recently, a spider set off the smoke alarms, forcing a midnight evacuation, Sister Francis tells me with glee.

There are also several rooms dedicated to making altar breads, the wafers used in Holy Communion, which are sold to the city’s Catholic churches—income crucial to the monastery’s survival. Each weekday, the nuns take turns on the gleaming machines, steaming and flattening the dough, then punching out coin-sized discs.

The sisters also show me around the garden: an orchard, a worm farm and compost bin, a thriving vegetable patch tended by 83-year-old Sister Marguerite. 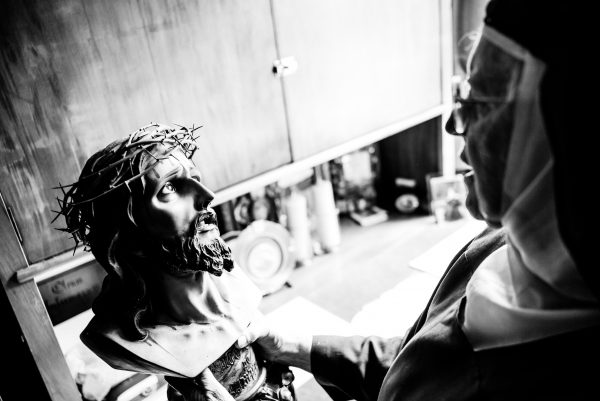 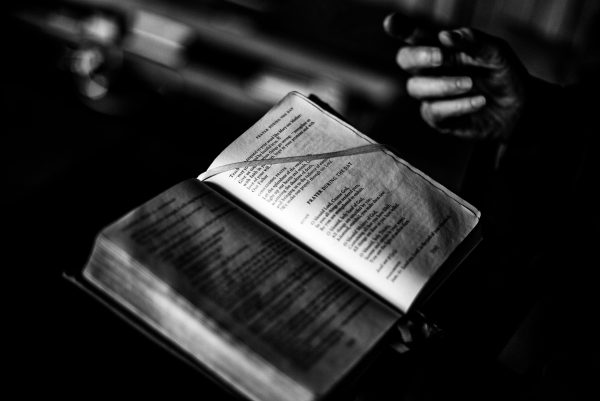 Tui sing in the ponga and pōhutukawa. The greenery dampens the traffic noise and offers privacy from neighbours. It’s a place to be alone.

“We’d be devouring each other after a while if we didn’t have the garden,” says Sister Francis.

It is also the nuns’ only contact with nature. They can’t go to the beach or the bush—but the garden holds plenty of wonder if you look closely enough, says Sister Francis. She’s been sketching all the little plants she finds there.

“When we get up in the early morning, all the birds are singing their hearts out,” she says. “Just to stand and listen is absolutely exquisite.”

In some ways, Carmelite life feels like a relic of another time, when women did needlework, when homes were dim and cold, when broken things were mended and reused. But monastery life has changed, too, since Mariam and Francis entered in the 1960s. Young women still become nuns, but the monastery population is more diverse. Most of the novices come from Southeast Asia, the Pacific islands or South America.

Technology, too, undermines the isolation. The sisters pay bills online, answer emailed requests for prayer, even upload videos to their website.

“You do need to use computers; you couldn’t possibly live without them,” says Sister Mariam. “But it means there can be much more invasion—we lock the doors, we have the grilles, but with the internet, it’s bringing the world right into the monastery.”

Some days are easier than others. But there are hard days in any life, and Sister Mariam has never regretted her choice.

“When I entered here, I was going for an LLB. It seemed I might have had a career in the law, and I gave that up,” she says. “And, of course, like every nun, I gave up the wonderful prospect of having a husband and children, and that’s a sacrifice for anybody. But it’s a sacrifice God asks of some people. I feel I have quite specifically been called to this.”