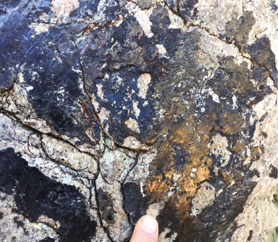 A fossilised earthquake is preserved in rock along the Livingstone Fault, which slices through both the North and South Islands.

It’s the first time the fossilised remains of tectonic movement have been found in serpentinite, a type of rock that resembles snakeskin.

When University of Otago PhD student Matthew Tarling and his team studied shards of Southland serpentinite under electron microscopes, they found a 0.001-centimetre layer of olivine and pyroxene within. Friction from the earthquake had heated the serpentinite to more than 800°C, dehydrating it and forming the two minerals.

Fossilised earthquakes are rare finds, and this discovery confirms the theory that serpentinite would behave in this way.