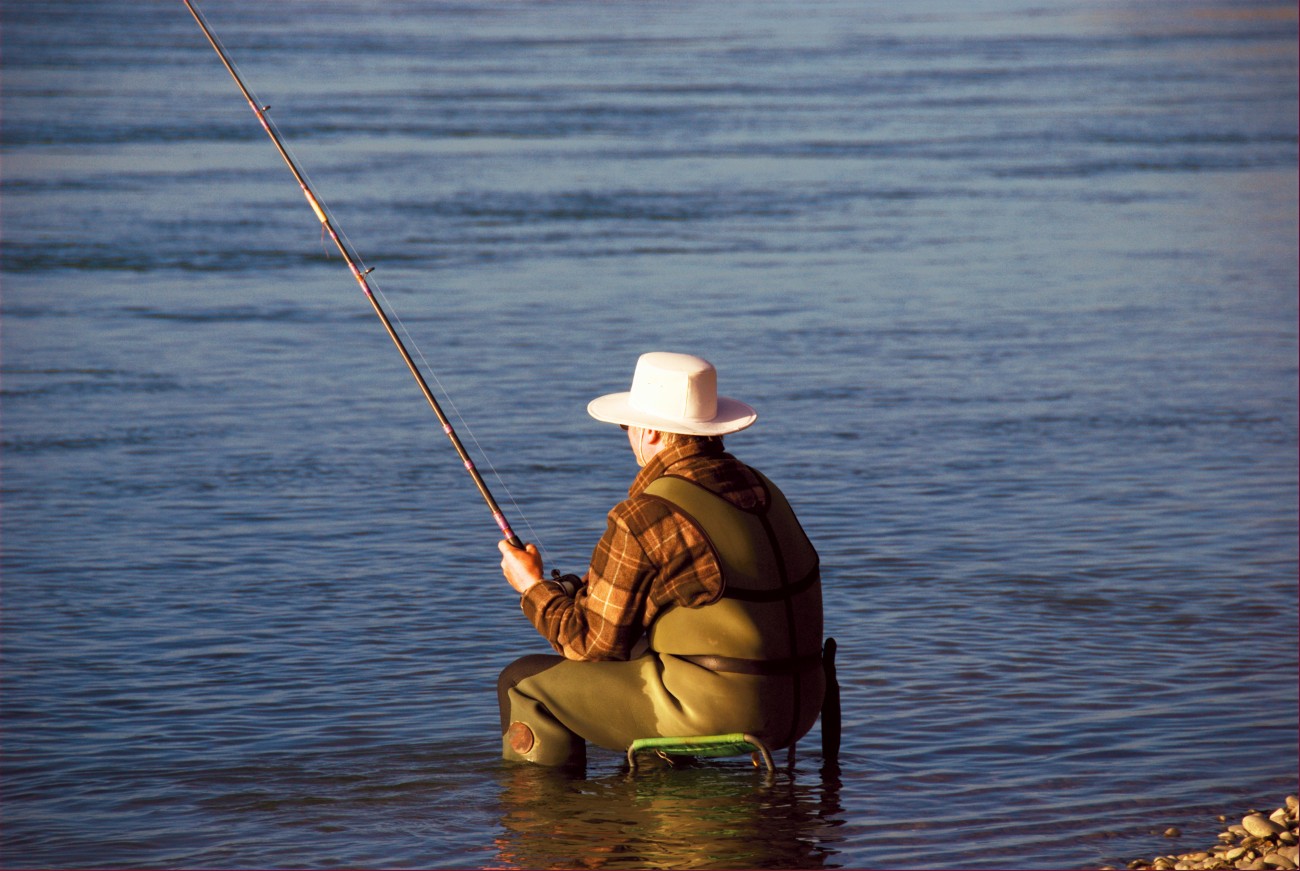 I pulled on a few clothes and strolled to the top of the bank. Below were dozens of fishermen and women spread out along the pebble banks of the Waitaki mouth.

The Waiataki River is 110 km long, and the major river of the MacKenzie Basin. A hundred metres before hitting the ocean, it takes a right-angled bend to the left then runs along behind a rampart of pebbles for a kilometre or two before sliding obliquely into the sea. I and the fishers were on a short section of inside bank, but many more were out on the longer outer spit, along with about 40 farm quad-bikes. A few runabouts were fanned out across the river. Today, fish were being faced with a gauntlet of hooks.

“The salmon season finishes tomorrow, so everyone is having a last shot at a fish,” a portly angler explained. Most of the fishers were male, middle-aged or older. A few sat on stools and some waded in, as if greater proximity to the fish might bring better suc­cess. All were casting spinners and some also had a sinker a metre back along the line to give more weight for casting. Casts upstream into the formidable current were followed by a slow retrieve as the lure was swept downstream. “We’re trying to get the lure to bounce gently along above the bot­tom because the fish are deep,” said one.

As the morning wore on, didymo was frequently cursed, as every line came in draped with a gob of the slimy pest. Some­times gear would snag on the bottom and there were occasional entanglements of lines, but nobody got upset.

Had it been a good season? “Not bad, not bad. Little has been around for the last few days but before that quite a few fish were being caught. And they’ve all been in excellent condition. Must be a lot of food out at sea.”

When asked how many is “quite a few” they said 20 in this mouth area of the river, perhaps more. “See that guy in the grey jer­sey over the other side of the river? Well, he alone has got 20 fish”. My informant admit­ted he hadn’t caught any this year, but wasn’t complaining, “It’s a great way to spend a morning, especially when it’s fine like this”.

There seemed to be a band of regulars who knew each other well. “You don’t have any secrets from fellow fishermen,” agreed one. “Standing side by side for a few hours, you soon know who has got haemorrhoids.”

There was not a lot of pretentiousness. Packs containing fishing gear were all old canvas and battered. Clothes were comfort­able and serviceable and you couldn’t tell surgeons from sales clerks—the river and the fish didn’t care.

A stout older man made his way towards us. “Here comes bloody Fred,” someone exclaims with cheery malice. I suspect Fred has the unpopular knack of being able to catch fish when nobody else can. “A cou­ple of years ago I caught two off the bike in quick succession while nobody around caught anything. This season I’ve got five so far.” As others kept a surreptitious eye on the lures Fred was using, he hooked a fish, although it got away. He switched to a lure that was 4 g lighter.

Suddenly a guy just along the bank hooked onto a salmon. His immediate neigh­bours took a lively interest but the rest stole only occasional glances. I scurried along to watch the action. While landing some fish is an effort, this one only took a few minutes. A bang on the head with a rock finished it off.

It was a magnificent creature, the largest salmon I’d ever seen; long, deep and broad. “That’ll weigh 25 or 30 pounds,” said a nearby woman. When the man heaves it up, it’s as long as his leg. He slipped a white stocking over it and went back to the rou­tine of casting.

I returned to the old hands. “Twenty-five pounds? That’s not an ounce over 18!” Later I’m told that a rough weigh put it at 27 lbs. The fish was described as dark in colour, evidence it had been in the river for a few days. Fresh arrivals from the sea are silver, but they darken and lose condition as they swim towards the headwater streams to spawn and then die.

I changed into shorts and waded across a thigh-deep, fast-flowing side stream to a long shingle bank that forms the western side of the mouth. Only two men were fishing this stretch, in part because the shingle is very steep. Further out there was a great flock of shags, hundreds of them, their guano splat­tered all over the stones.

A couple of salmon are landed on the other side of the river, but no more near me. Still, nobody is grumbling, and although the 31st is a Monday, I’m sure there will be a good number of hooks in the water in the hope of that last elusive salmon for 2008.