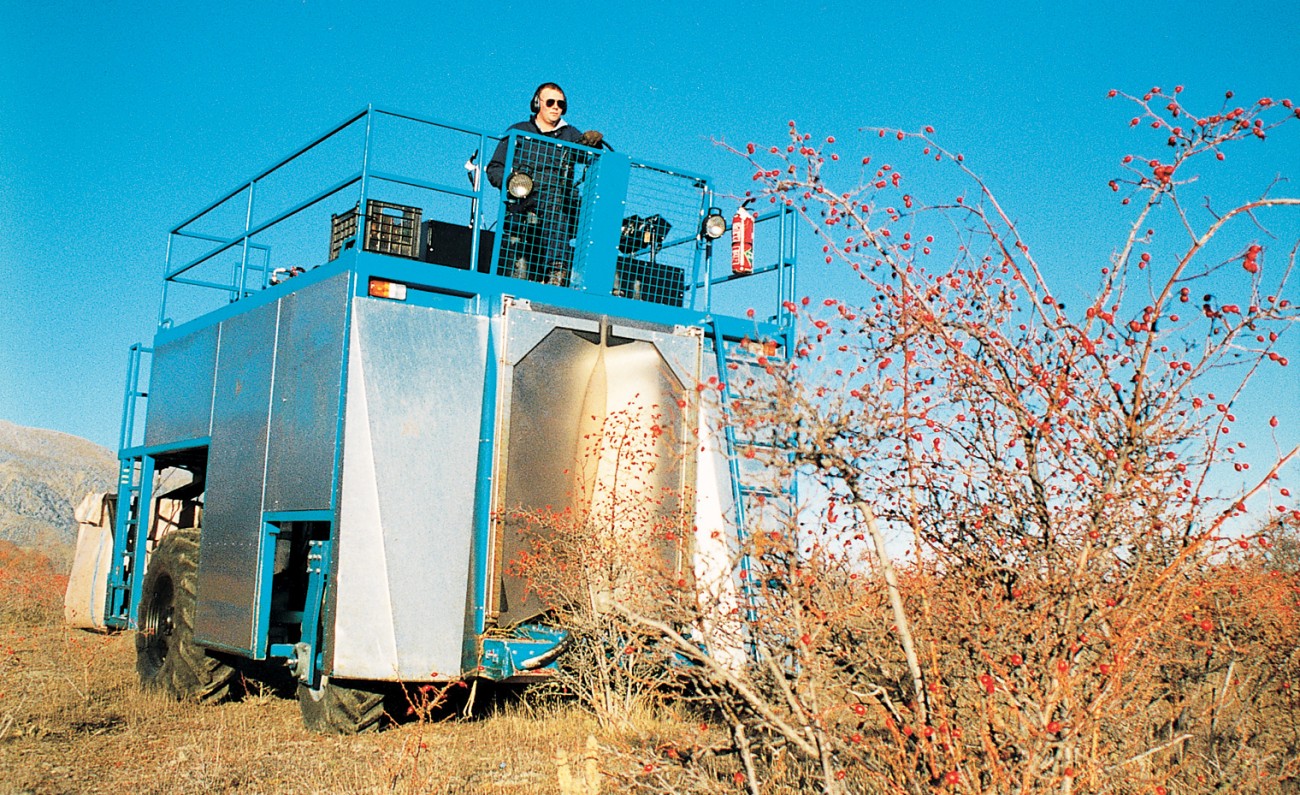 SWEET BRIAR IS widely considered a pest by South Island high-country farmers, but thanks to the efforts of two South African entrepreneurs this thorny bush with its bright red berries is set to transform land use in the Mackenzie Basin.

The two men, who spent six years running a similar business in South Africa before emigrating, have big plans for the crop, and have set their sights on turning this sparsely populated area best known for plagues of rabbits into one of the world’s major rose-hip-producing regions.

“Last year, between 12,000 and 16,000 tonnes of rose-hip shells were sold worldwide, and we are confident we can capture 50 per cent of that market,” says Hemm.

To achieve this figure Hemm and Raal say they will require 30,000-40,000 tonnes of fresh fruit each year. This is far in excess of what can be harvested from wild bushes, so the pair have set about convincing the district’s high-country farmers to develop sweet-briar plantations on their farms.

Raal and Hemm want to bring sweet briar into the mainstream of horticulture, and they will certainly succeed in this aim if the estimated 3000-4000 ha needed are planted. Their campaign is already paying off, with several plantations having been established over the past year, and more and more farmers becoming converts to the cause.

City investors are also looking to cash in on the thorny bush’s potential. One Dunedin businessman has purchased a farm in tile Mackenzie Basin with the intention of converting it into a 2000-hectare plantation this year.

Priscilla and Simon Cameron, who run tile 5800-hectare Ben Ohau station near Twizel, were the first to establish a plantation, and will have 80 hectares of bushes in the ground by mid-1998. The Camerons say that although growing sweet briar is very much a case of learning as they go, tile low establishment costs and relative lack of risk make it a worthwhile diversification option for farmers struggling with low wool prices.

“Establishing plantations is well within the capabilities of farmers in the district. If the industry takes off, it could boost the area’s rural economy by $10-12 million a year, virtually doubling the basin’s existing total farming income. I believe the prospects are very exciting.”

The rosy outlook for sweet briar comes from the ideal conditions the Mackenzie Basin provides for growing the bush commercially, coupled with rose-hip’s health-giving properties and versatility, says Hemm. “Not only does sweet briar grow prolifically here but the flat terrain makes harvesting relatively easy,” he says. Rose-hip is a natural product high in vitamin C and can be used in a wide range of goods. Tea can be made from the fruit, the oil can be used in the manufacture of cosmetics, while stock-feed extracts and bio-flavonoids from plant hairs can be used in vitamin tablets.”

Berries are picked in autumn using a purpose-built self-propelled harvester. Fruit is shaken free by a series of nylon-coated tubes moving at several hundred beats per minute and then fed through hydraulic fans via conveyors to remove debris, before being collected into bags.

Up to 1.5 tonnes of berries can be collected per day, depending on terrain and plant density. Harvested fruit is processed at a factory in Twizel using equipment Raal and Hemm brought with them from South Africa. It is dried for 12 to 24 hours, screened to remove impurities, such as small twigs and old berries, then packed in 20-kilogram bags.

Establishing a plantation is simple and cheap. Land is cleared of existing wild sweet briar, which is cut up for use as rootstock. Canes are simply pushed into deep-ripped ground with a little fertiliser to encourage rooting and growth. Hemm says that, once established, a plantation requires minimal management: “Sweet-briar plants virtually look after themselves and no disease-control measures are needed, which means our product is free of chemicals-an essential prerequisite for marketing nowadays.”

Plants take two years to start producing commercial quantities of fruit, with yields peaking from year three to year six or eight, after which the plants need to be pruned. Bushes planted at metre intervals in long rows three metres apart are expected to yield up to three tonnes of rose-hip per hectare on dry land, while plantations on irrigated land could yield up to twice that.

With the Twizel factory expected to pay about 35 cents per kilogram, returns of between $1000 and $2000 per hectare are a realistic expectation, says Hemm-far higher than can be achieved from high-country pastoral farming: “The returns are very good considering the low input. It is no get-rich- quick scheme, but the extra income it can provide is very respectable.”

Raal and Hemm are keen to see a selective breeding programme introduced to boost yields further by developing strains of sweet briar that bear more and bigger fruit.

While their operation employs just a handful of people at present, Hemm says if production targets are reached, a much bigger factory will be needed, which could employ 30 to 40 people; on top of this, extra harvesters and drivers would be needed.

If the expected economic benefits come to fruition, the much-maligned sweet briar may bring the Mackenzie Basin, if not an agricultural revolution, at least a much-needed boost.