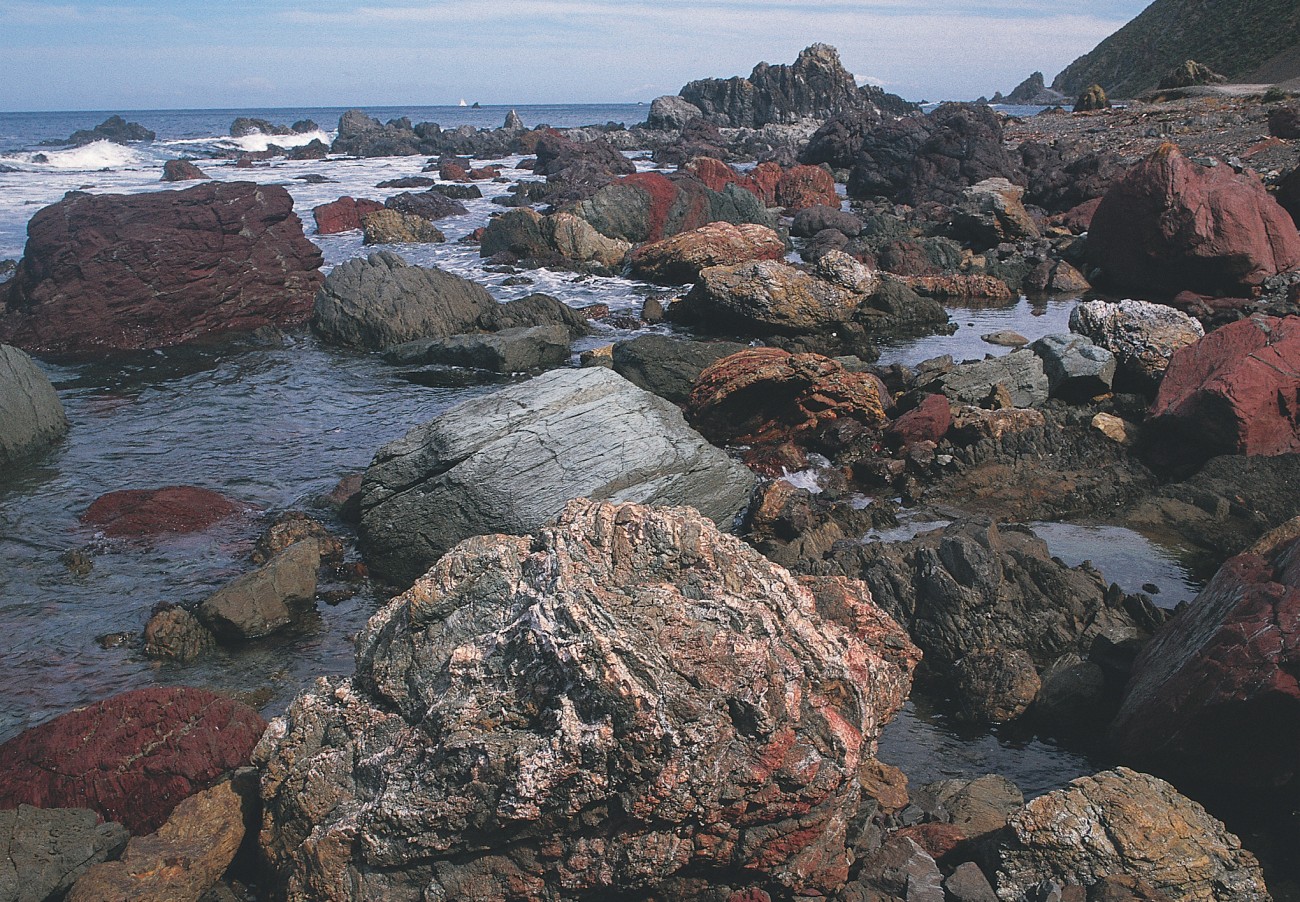 That land is made from rock seems such a truism as to be hardly worth stating. But different landmasses are made from different types of rock, and these distinctions can be informative as to how the land was formed.

Although our own patch of terra firma has a fair mixture of constituents, one is much more abundant than all the others put together: greywacke.

Greywacke is a rather variable and nondescript grey rock. The word is of German origin, from grau­wacke, meaning grey sand­stone. While entire scientific symposia have been devoted to its definition and details, it is best described as simply a hard, grey sedimentary rock.

The most important point here is that the rock is sedimentary. It formed from sand, mud, gravel, and silt that was eroded off existing land and dumped by rivers into the sea, there to be compressed over tens of millions of years.

But what was the pre­existing land that gave rise to the sediments?

Judging by the amount of greywacke in New Zealand, it must have been a sizable landmass. All the hard basement rocks of the main ranges of the North Island are greywacke—from Northland through the Hunuas, parts of Coromandel Peninsula, the Urewera, Raukumara, Kaimanawa, Ruahine and Tararua Ranges, and more.

The central North Island volcanoes have merely punched through greywacke basement rock and buried it under layers of ash and ignimbrite.

Greywacke has itself been eroded to form the soft and much younger papa sandstones and mudstones of Taranaki, Wanganui, Manawatu and elsewhere. In the South Island, all the central mountains are greywacke, and the Canter­bury Plains are just a sheet of greywacke rubble sluiced out of the Southern Alps. Most of Marlborough, Canterbury and Otago are greywacke. Even the schists of Otago are derived from greywacke—it has just been more deeply buried, and transformed into schist. And even that is not the end of the stuff. Under much of our vast continental shelf lies more greywacke. Out to the Chathams, south to the Campbell Plateau, it is probably all greywacke.

From analysis of the mineral composition of our greywacke, it has long been known that it had to derive from granitic rocks, and obviously a rock body at least as large as New Zealand in size.

For three decades the hunt has focused on Antarc­tica, but no suitable masses of granitic rocks have been discovered there.

Others have suggested that it was derived from a landmass that has now completely disappeared.

Now a new suggestion has been made, although it is unlikely to be very palatable to the average Kiwi, for it suggests that Aotearoa is derived from the outwashings of north-eastern Queensland! The new hypothesis has been arrived at largely from age determinations of minerals in the greywacke.

Greywacke is more than just a sedimentary rock like mudstone. It has undergone some degree of metamor­phism by burial, and the combination of pressure and heating has both hardened the rock and produced new minerals. Dating these minerals gives no informa­tion about the parent rock, but the greywacke also contains minerals from the original detritus that have resisted metamorphism, and which can be dated.

The best subjects for dating are those minerals that contain the common, naturally occurring radioac­tive elements potassium, uranium and thorium.

Potassium-bearing micas and uranium-bearing zircons are readily dated using potassium-argon, argon-argon, and uranium-lead methods. The radioactive decay rates are known (and are fixed), so by measuring the amounts of the original elements and the decay products you can determine the date when the parent rock formed. This is crucial information, because it limits the search for candidate parent rocks.

Christopher Adams of the Institute of Geological and Nuclear Sciences in Lower Hutt has spent 10 years painstakingly collecting, preparing and dating individual mineral grains from greywackes around the country, and in 1998 he published the results. They indicate that our greywackes formed from granitic rocks 230 to 290 million years old, with a minor mica schist component that was some­what older, at 425 to 450 million years.

These new data narrowed the search considerably. Now, rocks of a defined type and age were sought. No matching sources could be found in Antarctica, Tasma­nia, or south-eastern Australia.

However, north-eastern Queensland contains rocks that match in both age and composition. That this region is the source for New Zealand’s greywacke was further confirmed by isotopic analysis. Measuring the amounts of the various isotopes of strontium—a technique for fingerprinting rocks—indicated that Queensland rocks are the best candidates as parents for New Zealand’s greywacke. Although rare, some of the dated minerals are extremely old—up to 3,100 million years—and their nearest ultimate source is thought to have been the Precambrian core of south-east China. New Zealand has come a long way!

Only one question remains to be answered Queensland is 3000 kilome­tres distant. How did the sediment get here? It must have been transported by large river and delta systems similar to the Ganges and Orinoco Rivers of today, which drain large areas of mountainous hinterland.

Perhaps they were very long rivers, but it is most unlikely that they deposited their sediment loads where New Zealand is today. Probably the New Zealand greywacke formed close to the coast of Australia, so the sediment didn’t have far to travel. Subsequent to deposition, plate tectonic movement shifted us from the north-west towards the south-east. There is evidence for this trend in the move­ment of other rocks in the region.

Some east Australian greywackes are thought to have been derived from New Guinea parent rocks, and greywackes on the Antarctic Peninsula from basement rocks in the vicinity of modern southern New Zealand.

A consequence of these ideas is that the original locus of New Zealand greywacke sediments may have been subtropical. Efforts to determine and test these ideas by examining the fossils of sea life preserved in the greywacke are being carried out by me at the Institute of Geological and Nuclear Sciences. If the fossils indicate warm equatorial waters, then a near-Queensland location is indeed plausible. Indication of cooler mid-latitudinal waters would tend to support the idea of long river transport.

Whatever the outcome of ongoing research, all those New Zealanders who go to Queensland are really just returning to the motherland.