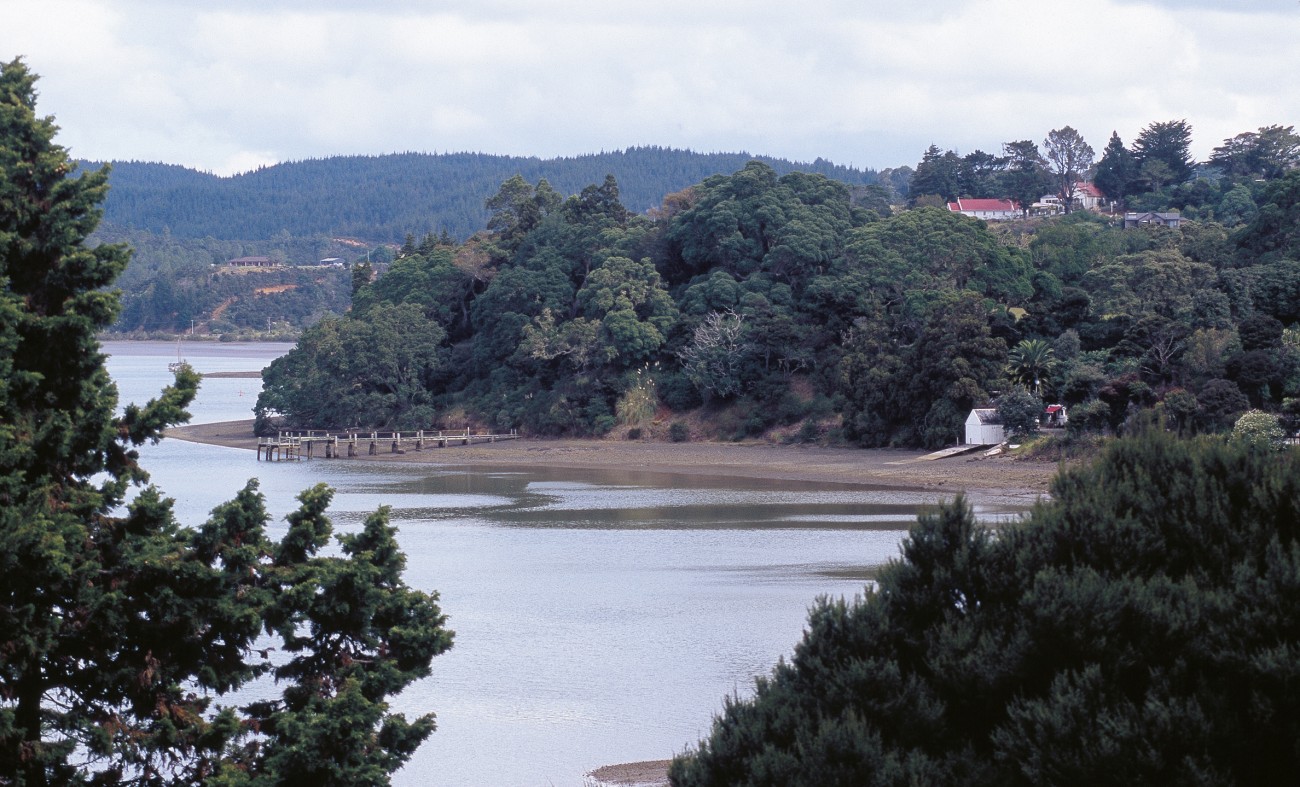 By the time Nimrod was work­ing New Zealand waters, they had a reputation as the best whaling grounds in the South Pacific. English and French whalers, driven south by overfishing in the Arctic, had been joined in the hunt for sperm and right whales by American ships from New England.

Butler would have been familiar not only with the notorious hell-pit of Kororareka (now Russell), which had seen a sixfold increase in whal­ing-ship visits over the past 10 years, but also with Doubtless Bay’s Man­gonui Harbour, to the north, which the New Zealand Pilot described as “very safe and good in all weathers”.

More to the point, the deep-water harbour was an excellent provision­ing post, with ample fresh water, extensive stands of kauri on the en­closing hills and obliging local Maori willing to barter meat, vegetables and fruit for gunpowder, fish hooks, blankets and mirrors.

After 10 hard years at sea, Butler was ready to come ashore at such a place and take up a new life. In 1792 the American skipper Eber Bunker had made the first recorded visit to Mangonui by a whaler, and in 1831 Sydney merchant Ranulph Dacre became the first Pakeha to buy land there, which he did with the idea of felling timber for masts. Butler followed suit, buying the 260 ha Paewhenua Island, along with land in the Bay of Islands.

Over the next 12 months he accumulated more land, and in early 1840 he settled in Mangonui. Soon after, he married Eliza Merritt. Actually, he married her twice, the second time unnecessarily, on the urging of the priggish Reverend Rich­ard Taylor, who wrongly claimed that the original service had been illegal, having been conducted by “an un­authorised person and a disbeliever in the Trinity”.

Butler was no sooner ashore than he set about earning a living by provisioning whaling ships—he even swam cattle out to vessels as they lay at anchor—and by cutting trees for spars, firewood and build­ing timber. Thanks to his energy and business acumen, within a few years he had become the principal trader in Doubtless Bay and a widely respected founding father of the set­tlement. He was made port pilot and went on to become the Far North’s representative in the General As­sembly. He began exporting dressed flax for rope-making and kauri gum for varnish, bought land on a small peninsula in the bay, built a ware­house and wharf there and barged his house across from Paewhenua Island in order to be nearer the hub of things.

Beneath a notice in the Southern Cross in October 1848 advertis­ing the supply of provisions “for which oil and bone will be taken in exchange”, Butler reassuringly added: “There are no grog sellers in the place and no fears need be entertained of the crews leaving vessels. This being the Headquarters of the Police for the district of North Auckland, a Superintendent with detachment is always on the spot to prevent desertion…” It helped that eager local Maori were offered £5 for every sailor recaptured.

Butler was no stranger to lawless­ness. Five years earlier, during what came to be called the Oruru War, his island house had been burned by disaffected Maori, while during Hone Heke’s 1845 rebellion friendly Maori had protected his family from hostile marauders. The same Maori are said to have once cowed militant whalers who were threatening him, by performing a haka on the point in plain view of the whalers’ moored vessels.

After the sack of Kororareka, whaling skippers made greater use of Mangonui as a provisioning base; reports mention up to 40 whalers’ ships in the harbour at a time. Man­gonui’s popularity increased further in 1852, when gold fever in Australia made skippers wary of calling there for fear of desertion.

The Bay of Islands never recov­ered its economic dominance, and even for Mangonui such fortune could not last. The outbreak of the American Civil War in 1861 dis­rupted the whale trade, and wary skippers preferred to scrimshaw than risk their ships—especially after the Confederate privateer Shenandoah had left a trail of blazing whaling ships across the Pacific. In any case, by then new whaling grounds had been discovered in the north-west Pacific and off southern Japan, and New Zealand had fallen from favour.

Butler himself didn’t outlive the demise of whaling by much. He died in 1875 from an injury suffered in Mangonui 14 months earlier, when he slipped from a gangway and was crushed between a steamer and the wharf. He lies with several of his 13 children in an old cemetery on his property.

The family business went into decline after his death, and what had become know as Butler Point passed through several owners until, almost a century later, it was bought by Auckland eye surgeon Lindo Fergu­son and wife Laetitia.

The Fergusons purchased the 22 ha property as a weekend retreat. However, as they pieced together the history of the point, the convic­tion grew that it should be pre­served; more than that, the once de­lightful gardens should be replanted and the house restored and opened to the public.

Photograph albums record the painstaking work of rescuing the house—now with a Historic Places Trust classification—and assembling period furniture to augment what had survived from Butler’s time. The 1840s travelling piano is from the Albertland settlement (see New Zealand Geographic, issue 70). The elaborately carved chiffonier and wall mirror are the work of a later owner, Mangonui dentist and hob­byist cabinet-maker Hubert Dacre, a grandson of Ranulph Dacre.

The gardens, screened from the bay by a rustic ponga fence, still hold remnants from Butler’s days, including an impressive Magnolia grandiflora, a fig tree and a regen­ erating olive tree, along with more recently introduced exotic and subtropical shrubs and trees. A grove of ancient pohutukawa includes one claimed to be the country’s largest, with a trunk girth of 10.9 m. There is also a macadamia orchard, prod­ucts of which can be bought on the property.

All of which would surely have been enough. But the Fergusons went further. Having built an un­obtrusive modern house for them­selves, they created from scratch at Butler Point the country’s only dedicated whaling museum. Cura­tors would be hard pressed to find a more fitting location. Housed just metres from the original home of a 19th-century whaling skipper, it sits on the lip of a bay strewn with black Peruvian rock—ballast from foreign whalers.

For almost 30 years, the Fergu­sons have scoured New Zealand and beyond for whaling artifacts, learn­ing the art of interpretive display as they have gone. Among the exhibits documenting the gruesome business of whaling (see New Zealand Geo­graphic, issue 60) are hand-held and explosive-tipped harpoons, includ­ing a weighty Norwegian ordinance from South Georgia, and an impres­sive collection of whalebone prod­ucts ranging from bottled Victorian watch oil to corsets and umbrellas.

Very little of the big marine mam­mals was without some commercial value. The pancreas supplied insulin, the tendons were used for surgical sutures, and glycerine, extracted from bone, found its way into ex­plosives. Teeth were fashioned into scrimshaw or sliced into piano keys, ambergris was added as a fixative to perfumes, skin was turned into laces, handbags and bicycle seats, and baleen was used for everything from shoehorns to knife handles.

Spermaceti, a waxy oil found in the head cavity of sperm whales and once used for candles, has even journeyed through space to other worlds. Thanks to its property of remaining viscous at extremely low temperatures, it remains the lubri­cant of choice on NASA’s space vehicles.

One cabinet in the Fergusons’ museum holds cunning examples of “fakeshaw”—scrimshaw look-alikes made from modern resins. The way to tell the difference, says Lindo, is to insert a heated needle into one end. Resin will fizz; bone won’t.

Elsewhere is a medicine chest, courtesy of Hawaii’s Maui Whaling Museum, its cryptic glass vials num­bered and the uses of the elemen­tary remedies they contained listed on the lid. It is said that one whaling skipper, on finding his number-nine bottle empty, dispensed a mixture of numbers four and five, “with results that are not recorded”.

The jewel in the museum’s crown is a restored 120-year-old whale­boat. The only one in the country to be displayed fully kitted out for whaling, it holds harpoons, a whal­ing lance, oars, a removable mast, a water barrel, crew’s rations and 300 fathoms of coiled rope. Even without the half-dozen men it was designed to carry, it is a cluttered space from which to take on the biggest beasts in the ocean.

It is even more sobering to imag­ine the physical reality of the clash of man and whale. Tellingly, down aft sits a tub to cool the wooden bollard with sea water as the rope attached to the stuck harpoon whips around it. And in the bow lies an axe to sever the rope should things go from everyday awful to horribly wrong.

Getting close to the industry’s bleeding edge is one of the rewards of a visit to Butler Point. For the faint-hearted, there is the distrac­tion of a gentle stroll to a surveyed and fully interpreted pa site on the property and picturesque grounds that make a delightful backdrop for an impromptu picnic.