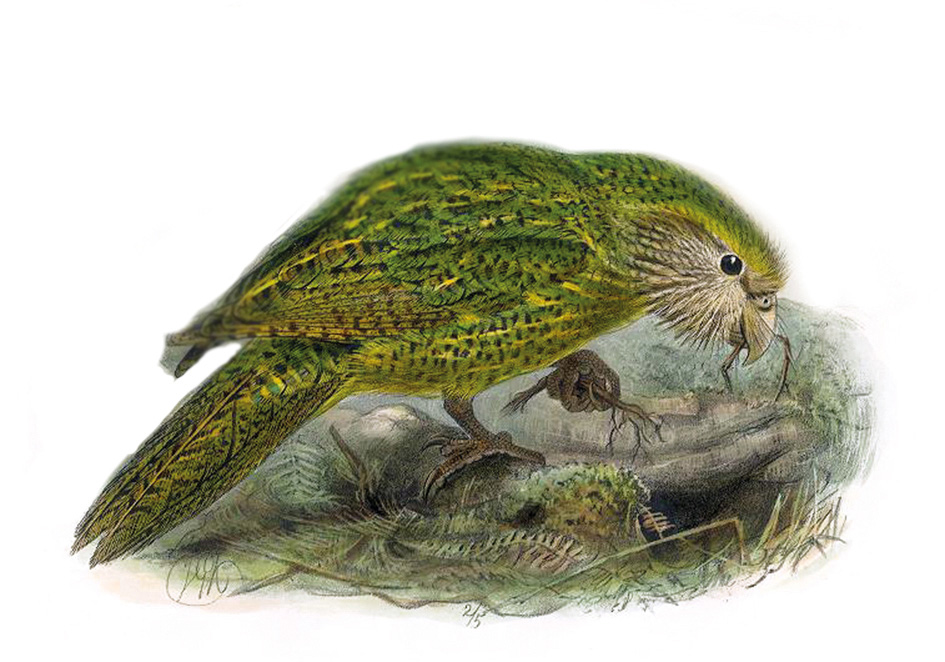 The first time I saw a kākāpō in the wild was on a windswept ridge of an island off the west coast of Rakiura. At that time, 2002, most of the 86 living kākāpō were clustered on that one island, Whenua Hou. It was the middle of the night, and I was jammed in a tent with two wildlife rangers.

Every half an hour or so, we checked the screen of a monitor that was connected to a repurposed domestic security camera stationed 80 metres away, on the island’s summit. The camera was pointed at a shallow depression in the soil—a kākāpō courtship bowl. The bowl was empty. Whenever we turned the monitor on, all we saw were scrubby bushes flailing in the wind, and all we heard was the caterwauling cries of petrels wheeling overhead in the storm.

Then, around midnight, we heard what we had been hoping for: the sonorous boom of a kākāpō male. Three hands reached simultaneously for the video button. The screen came to life, and there, pumped up like a rugby ball, was Lionel, singing his basso profundo lovesong to the island’s 21 females. All of whom, apparently, ignored his overtures. When I checked online just now, I learned that Lionel died in 2014, apparently without siring any offspring.

It’s quite something to find every kākāpō listed by name on Wikipedia. All 123 adult birds are there, along with the recently deceased, like Lionel. And, as the story in this issue of the magazine explains, these birds don’t just have names but now also an individual genetic fingerprint—and, with that, an expectation that the species can be managed towards a more robust future.

This year has been the best-equal kākāpō breeding season ever. Whenua Hou—“new land”—is turning out to be more than a rest home for old birds; it’s a nursery for new generations.

Already, at least one mainland predator-free sanctuary is angling to have kākāpō as permanent residents. What a marvel that would be; a turning back of the ecological clock by three decades, when the last mainland kākāpō were scooped up from their forest haunts in Fiordland and Rakiura and taken to island arks.

It was frightening how quickly the end came for kākāpō in mainland sites—even in mountainous Fiordland. I read the story of their disappearance on the walls of a galvanised-iron A-frame bivvy in a remote valley south of Milford Sound, a place known as ‘Kākāpō Castle’ for its previously healthy kākāpō population. Here the indefatigable conservation biologist Don Merton had pencilled on the inside walls of the shelter the increasingly dismal results of his searches. As the years of the 1980s ticked by, the records of male kākāpō booming decreased. Merton’s entry for 1989 consisted of two words: “No booming.” That was the end of kākāpō on the mainland.

One of the most charming stories I ever heard about that sad era had to do with kākāpō feathers. When Merton and others were searching for the last kākāpō in Fiordland, they realised that tiny rock wrens—themselves a threatened species—could help them. Rock wrens are fanatical feather gatherers, which they use to line their nests. The pioneer Hawke’s Bay naturalist Herbert Guthrie-Smith once counted 791 feathers in a rock wren’s nest. Merton deduced that if a rock wren’s nest had fresh kākāpō feathers inside, then there was a good chance that a kākāpō was residing nearby. One threatened species pointed to the presence of another.

That connection between the big parrot and the little wren has been severed for decades, but a recent development may see it re-established. Among the Fiordland islands to have been recently de-predatored is Secretary Island, at the mouth of Doubtful Sound. In 2009, I helped catch rock wrens from the Fiordland mountains and release them on the island, where they have successfully established and are now breeding. Kākāpō may soon be released there, too. Who knows, rock wrens may again be able to line their nests with the fragrant green moultings of the parrots of the night.

Such dreams of revived ecological connection come with a high price tag in human time and resources. But the public will is there to do it. The government’s recent buy-in to the predator-free mission is recognition of that fact.

There’s no time to lose. Four thousand endemic plant and animal species are at risk of extinction, including 40 per cent of New Zealand’s birds and double that number of lizards and freshwater fish. New Zealand has been called the “extinction capital of the world”.

Don Merton once told me: “Rare species can’t wait.” That was the knowledge that drove him, and the same urgency needs to infuse our consciousness and propel our action today.

Urgency, yes—but also delight. The morning after watching Lionel’s mountain-top aria, I was in the Whenua Hou forest helping to weigh Aranga, a three-year-old kākāpō who is now in her late teens. As she nibbled the piece of kumara I was using to coax her on to the scale, I felt the tickle of her whiskers and warmth of her feathers on my hand. I leaned close, breathing the sweet fustiness of her plumage, an aroma I once heard likened to the inside of a clarinet case.

When the food was gone and Aranga looked up with her inquisitive, owl-like face, I had to laugh. Look at you, I thought: an oversized budgerigar with an antique perfume that walks by night, lives not in the tropics but in the cold blast of the Roaring Forties and breeds by holding a singing contest.

It is the delight I have come to feel about this country’s biota as a whole: a taonga of inestimable value, giving mana to us who share its native home.