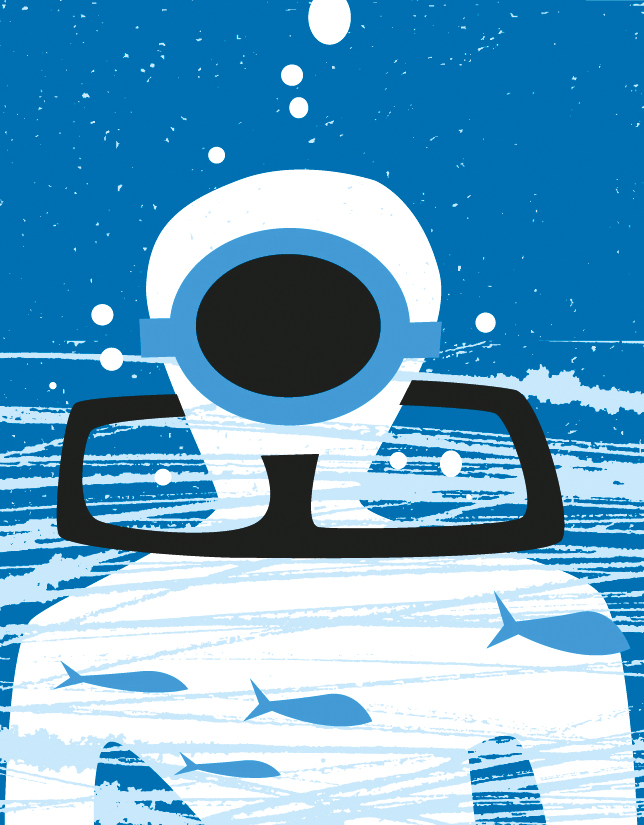 In the opening scene of Jacques Cousteau’s first feature film, The Silent World, seven divers, each holding aloft a torch of blazing phosphorus, descend into the abyss. The camera follows them down, tracking through the bubbles of hot gas that swell and rise like white mushroom caps to the surface. On the seafloor, 50 metres down, the divers fan out to explore and film a coral reef. Over the Darth Vader rasp of their breathing comes the voice of the narrator: “These divers, wearing the compressed-air aqualung, are true spacemen, swimming free as fish.”

Cousteau released The Silent World in 1956, and it won the Palme d’Or and an Oscar. Over the next four decades, his movies and television documentaries would make him a household name, his adenoidal French accent as familiar in his day as David Attenborough’s breathless British whisper is in ours.

Born 100 years ago in June, Cousteau was 26 when he first put on a pair of goggles and dived into the Mediterranean. Of that experience he wrote: “Sometimes we are lucky enough to know that our lives have been changed, to discard the old, embrace the new, and run headlong down an immutable course. It happened to me on that summer’s day, when my eyes were opened on the sea.”

Cousteau’s motto was “Il faut aller voir”—We must go and see for ourselves. And where he went he inspired myriads to follow. My own early glimpses of the silent world were at Tawharanui, a curving finger of land that juts into the Hauraki Gulf north of Kawau Island. On a lungful of air, you could become an explorer in an undersea forest—a forest of kelp, with sea urchins grazing their bases and mullet gliding between their trunks. Under the canopy of fronds the light was dim and golden, the sense of mystery palpable.

Until you ran out of breath…

But then came scuba—the euphonious acronym for “self-contained underwater breathing apparatus”—and with it the freedom Cousteau described after his first dive with an aqualung, in 1943: “From this day forward we would swim across miles of country no man had known, free and level, with our flesh feeling what the fish scales know.”

Flying without wings, Cousteau called it. And such flights! Scuba has opened worlds beyond dreams. I have dived with harp seals in the frozen Gulf of St Lawrence, surfacing into a margarita slush of sea ice that stung my face like needles. I hand-fed sharks off the coast of South Africa, and once, far offshore in the Indian Ocean, where the swells reared up like small mountain ranges and dolphins surfed down their faces, I leaped into that limitless blue to witness sperm whales passing.

Here in New Zealand, the Poor Knights, of course, an undersea canyonland of caverns and arches that Cousteau himself visited and is said to have declared to be one of the top dive sites in the world. And the incomparable fiords, an emerald-tinted world of strawberry sea squirts, black coral trees and pink sea pens—the ocean’s living quills.

It seems incredible that humans started exploring space at the same time as we began diving beneath the seas of our own planet. (Sputnik, for instance, was launched the year after Cousteau made The Silent World.) The two realms are often compared, and logically so. In both environments a person is weightless and needs a portable air supply. And though the undersea is far from silent, it is a place of profound and soothing quietude.

But it is the otherness, the alien-ness, that is the most telling comparison. I know no other activity in which one so completely steps through the wardrobe of the familiar into a Narnia of strange sights and even stranger creatures. One moment you are an earthling, tethered to the terrestrial like your fellows; the next you are, as Cousteau put it, an archangel. Some might even go so far as to exclaim, like Narnia’s Unicorn: “This is my real country! I belong here. This is the land I have been looking for all my life, though I never knew it till now.”

Cousteau tried that, too, sending his “oceanauts” to live in experimental stations on the seafloor, once for three weeks at 100 metres. (Their biggest problem was that at that depth, the champagne went flat.)

Short of growing gills, our visits to the silent world will always be temporary sojourns. The important thing—as Cousteau and his torch-bearing spacemen showed—is to go and see for ourselves.