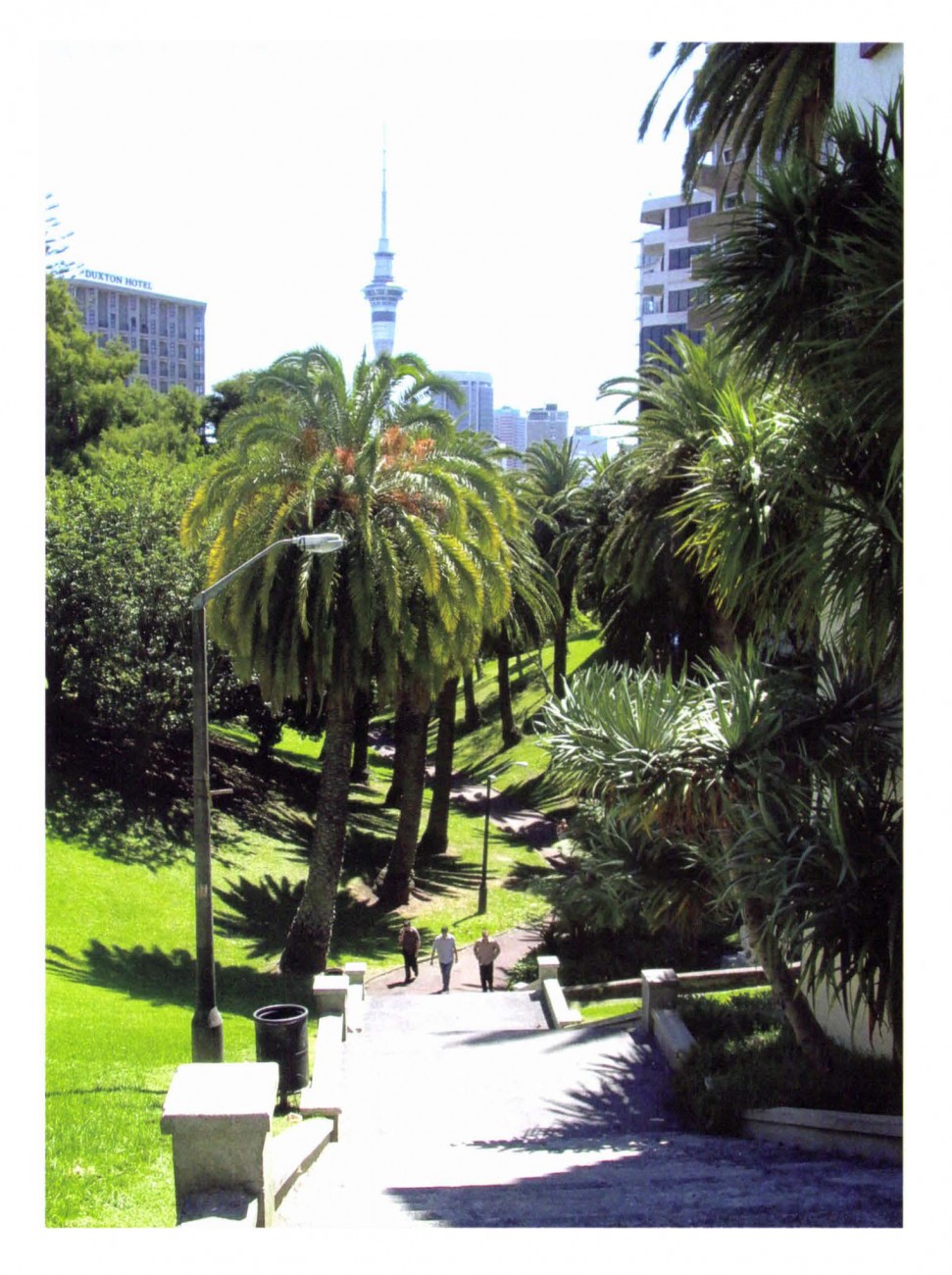 Auckland’s Queen Street, the coun­try’s most iconic retail thorough­fare—a ribbon of asphalt surrounded by jostling high-rises—is not a place one associates with trees. But they’re there just the same. South of the town hall, just below the street, is a gentle gully, and it’s full of trees.

Myers Park—little more than three hectares in size and encircled by tall buildings—is sometimes referred to as the forgotten park. But it’s a spot worth remembering because it isn’t only full of trees, it’s full of history.

The story begins nearly a hun­dred years ago, when today’s leafy gully was nothing but a festering pit of rubbish tips and slum shanties. Money, and the vision of something better, transformed the place. The money came courtesy of business­man and politician Arthur Myers, who purchased the land in 1913 and gifted it to the city as a park.

Myers also had vision—but so did others. The notion of city parks as  the embodiment of civic virtue was at the heart of a powerful movement at the time. “City Beautiful” was a worldwide phenomenon. Parks were seen as providing opportunities for citizens to improve their physical health, aesthetic sense and moral values. It was an idea that captured the imagination of many civic lead­ers of the time—and, luckily for Auckland, Myers was one of them.

Parks also had an educational connection. It was a time of building playgrounds, and Myers paid for the construction of one in the park, as well as a nearby kindergarten that still bears his name.

As I wandered through the park looking at mature trees—swamp cypresses (Taxodium distichum); Australian red cedars (Toona austra­lis); Morton Bay figs (Ficus macro­phylla)—I tried to imagine a wealthy figure of today making a similar endowment. Somehow it seemed unlikely. Did that mean that people were more public-spirited back then? Or had the altruism of yesteryear merely taken another guise these days? The trees at Myers Park had nothing to say on the subject, but they did speak of another time. The formal avenues of palms—Canary Island (Phoenix canariensis) and cot­ton (Washingtonia filifera)—seemed oddly comforting. Standing in their long shadows I fancied I could al­most hear a brass band playing God Save the King—but the tune was so distant I didn’t know which king they were saving.

Other trees caught my eye: a white pine from Japan (Pinus parvi­flora); an ombu from the Americas (Phytolacca dioica); an Asiatic coral flame tree (Erythrina sykesii); an At­lantic cedar (Cedrus atlantica). These were specimens from an era of wide botanical horizons; when curiosities from abroad were avidly collected; when a stroll in the park meant a geography and history lesson rolled into one.

Natives, of course, were almost absent. They must have seemed all too ordinary in those days. But I was pleased to note a couple of size­able puriri (Vitex lucens) growing amongst the international celebrities. They looked lush and vaguely tropi­cal—like their teak counterparts. Perhaps they’d been mistaken for exotics.

Even more absent were the elms (Ulmus x hollandica). Once there had been 12 of them. They’d stood, lofty and majestic, in the north-east­ern corner of the park. Notable in life, they became even more nota­ble in death—but for all the wrong reasons. In 1989, these unfortunates were the first trees in New Zealand to succumb to the deadly Dutch elm disease. Caused by a pathogenic fungus (Ceratocystis ulmi), this has wreaked havoc in many parts of the Northern hemisphere, including Britain, France and North America. It is carried by a couple of species of elm bark beetle, one of which (Scolytus multistriatus) has become established here. Yet, so far, the disease has been confined to a few isolated pockets of Auckland, and there is hope that it will eventually be eradicated.

Like the trees, the buildings around the park have grown over the years. There are a lot of them now—office blocks, apartments, hotels—and each new edifice seems twice the height of the one it has re­placed. They tower over everything; even the lanky cotton palms look insignificant beside them.

People were less conspicuous. The once resplendent Myers Park kindergarten has closed. A small congregation of youths gathered by a disused fountain; I discreetly kept my distance. More striking were a couple of regulars. One of them had clearly taken up residence inside the hollowed-out trunk of an ombu tree. He looked elderly and well used to living rough. It seemed churlish to deny him some much-needed shel­ter, yet somehow I had the feeling this wasn’t quite what Arthur Myers and his friends had envisaged, back in the days when there was a king on the English throne.

But utopias are like that: they seldom turn out the way they were intended. And despite the obvious encroachments of modern life, Myers Park still offers plenty of charm for tree-lovers like me. The swamp cypresses are some of the largest you’ll find in New Zealand. Then there’s the delight in finding a monkey hand tree (Chiranthode­ndron pentadactylon). So named because of the hand-like appendages to its flowers, the monkey hand tree is relatively rare in New Zealand. In Mexico, where it grows naturally, it’s attributed with magical pow­ers—and I must say I felt somewhat spellbound when I first noticed it.

Rare, too, are the Australian red cedars. This rather graceful tree isn’t really a cedar at all—in fact it’s not even a conifer—but its cedar like timber has made it prized by loggers. Not so long ago it grew commonly in the coastal regions of south-east Australia. Now it exists only in iso­lated pockets—and, thankfully, in Myers Park.

The day was getting on—and I had a lot to be thankful about. I had the feeling that my expedition to Myers Park had fulfilled its mission. The trees had spoken to me—and something of the spirit of the past had touched me. I rubbed my fingers affectionately down the bark of the Japanese white pine and watched the children from a nearby school stream into the park.

Trees and the laughter of children: it was a nice combination.