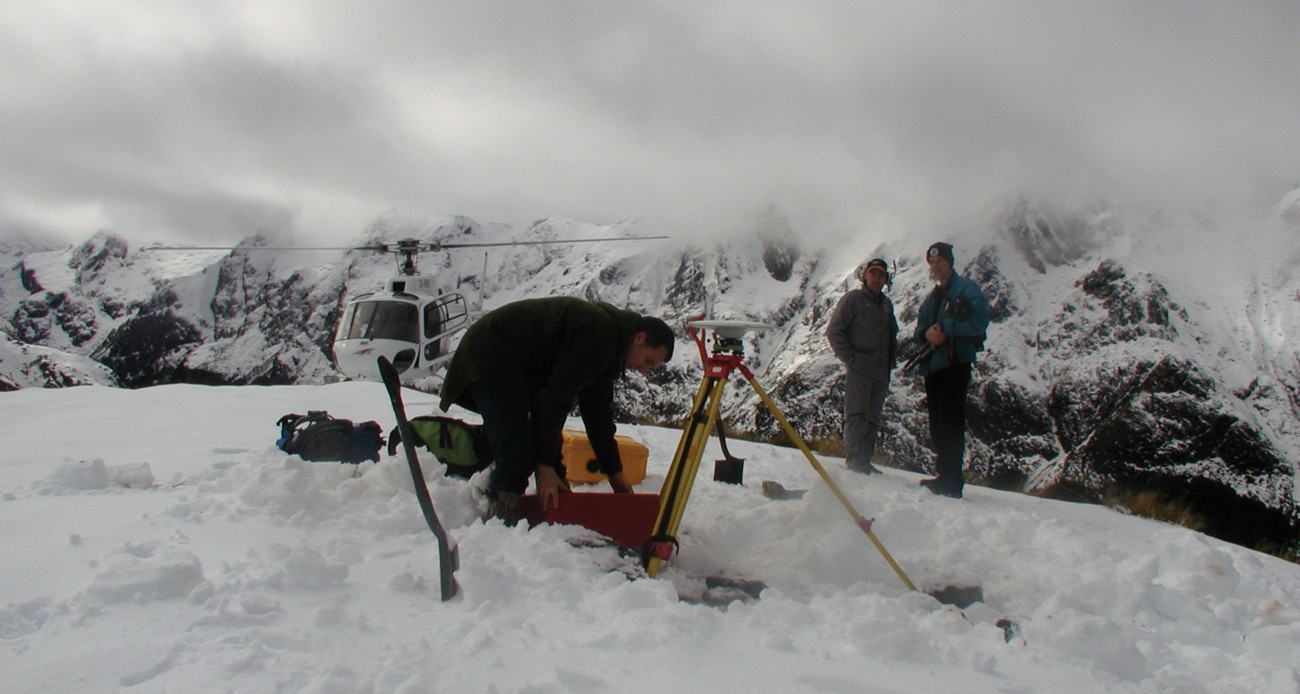 The earthquake that shook the southern South Island in the early hours of August 22 was the largest shallow quake in New Zealand since the destructive Inangahua shock of 1968.

It had a magnitude of 7.1 and was centred near Secretary Island, on the west coast of Fiordland. Because of its remote location, it caused remarkably little damage to human infrastructure. The main reported impact was in Te Anau and Queenstown, where items were thrown off retailers’ shelves.

In contrast, damage in the wilderness of Fiordland National Park was extensive, in the form of many landslides within 50 km or so of the epicentre.

Strong aftershocks, some of magnitude 6.2, continued for many weeks following the main shock and caused considerable public anxiety. Scientists, however, greeted August’s seismic event with enthusiasm. Because the last two years have seen the initiation of the Earthquake Commission-funded GeoNet project, which upgrades geological-hazard monitoring in New Zealand, the Fiordland earthquake promises to supply more and better data than any previous quake.

This will not only help geologists understand the forces at work beneath Fiordland, but also provide invaluable information for understanding and mitigating the effects of future earthquakes in New Zealand.

Although the strongest tremors occurred in the southern South Island, people reported feeling the Fiordland quake as far away as Wellington, and even Auckland. More remarkably, it was felt on the east coast of Australia, particularly in Sydney, nearly 2000 km away.

The energy from the earthquake was carried to Australia not via the earth’s crust but through the ocean. At about 1000 m depth is a region known as the SOFAR channel, where sound travels especially slowly. The higher temperature of shallower water and the greater pressure of deeper water both increase the speed of sound. As a result, sound energy that gets into the SOFAR channel essentially remains trapped within it and can therefore travel great distances.

The Fiordland earthquake lifted a large area of the seafloor just off the coast, which “pumped” a lot of energy into the SOFAR channel, generating a pulse. This crossed the Tasman Sea, reaching the east coast of Australia about 20 minutes later. Some of the energy was then converted back into the shaking of continental rock, and this caused the motion that was felt in Sydney.

The earthquake was recorded on seismometers around the world, and within a few hours locations for its epicentre and depth were being reported by both New Zealand and overseas scientists. The seismometer closest to the epicentre was about 50 km away, at Manapouri power station, and this instrument, together with a number of others in Fiordland, Southland and Otago, enabled scientists to pinpoint the location to within about 10 km.

It is hard to be more precise that this, when seismic stations are as thinly spread as they are. Consequently, on August 22, Institute of Geological and Nuclear Sciences (GNS) scientists took nine portable seismographs to Te Anau and, over the next few days, deployed them close to the epicentre.

Six of the seismographs were very sensitive instruments designed to record and locate even the weakest tremors, allowing the distribution in space and time of the many thousands of expected aftershocks to be mapped very precisely. Once completed, this will make it possible to identify which fault broke in the earthquake and to ascertain if there was any motion along other faults nearby. The other three instruments were so-called “strong-motion” devices, designed to record the shaking of only the largest aftershocks.

The portable seismometers were left in position for several weeks, recording data in their internal memories. They have only recently been recovered from the field, and the mammoth task of calculating accurate locations for the thousands of aftershocks is just beginning.

Immediately after the quake, reconnaissance was initiated to assess damage in the vicinity. More than 450 landslides were recorded. The largest dislodged more than 600,000 m3 of rock and nearly struck a Department of Conservation hut.

Post-quake landslide surveys are important for several reasons. They provide an independent method for locating the source of an earthquake, as damage is usually concentrated nearby. They can also identify secondary hazards that result from landslides. For example, a slide can temporarily dam a stream, so that when the dam eventually breaks it releases a possibly devastating flood.

The pattern, type and size of landslides can also indicate the kind of damage that future large earthquakes are likely to cause, which is useful for civil defence and other emergency planning.

Apart from landslides, damage from the Fiordland earthquake was remarkably light: minor cracking of some concrete structures in and around Te Anau, a light degree of slumping along the shoreline of Lake Te Anau and brief closure of the Wilmot Pass road through the collapse of a cutting. The Manapouri power station, electricity transmission lines and communications were essentially unaffected. In a heavily populated area, damage would have been much more extensive.

In the week after the earthquake, Global Positioning System (GPS) instruments that can fix positions to an accuracy of a few millimetres were set up at 11 geodetic survey monuments, or trigstations, within and around Fiordland. The positions of these sites had been accurately measured using GPS during February 2001 in a joint Otago University­ GNS project.

After making a small correction to allow for tectonic movement between 2001 and 2003, scientists could deduce the displacement of the 11 sites during the earthquake by noting the difference between the February 2001 and late-August 2003 positions.

The largest horizontal displacement recorded was 17 cm in a west-northwesterly direction, in the Museum Range, combined with subsidence of about 10 cm. From the pattern and size of the displacements it is possible to calculate a model of the position and orientation of the fault surface that ruptured during the earthquake, as well as the amount and direction of slippage between the two sides of the fault.

Although the largest vertical displacement observed at any of the GPS stations was 10 cm, the model predicts considerably greater uplift elsewhere­ nearly 50 cm offshore of Secretary Island. This sudden and substantial raising of the seafloor explains how so much energy entered the SOFAR channel. Such movements of the seafloor commonly generate tsunami, and, indeed, a small tsunami with wave heights of 10–20 cm was observed at the Jackson Bay tide gauge and at tide gauges on the east coast of Australia.

While the greatest uplift occurred offshore, the model predicts as much as 40 cm of upward movement along the outer coast of Secretary Island, and lesser displacements to the north and south. Nature provides a useful measure of the size and distribution of this kind of coastal uplift in the form of sessile intertidal organisms such as barnacles, mussels and red algae, which survive in only a narrow range between low and high tide. After a sudden raising or lowering of the coastline, these organisms slowly die before re-establishing themselves in their preferred locale. Now that several months have elapsed since the Fiordland earthquake, scientists are poised to start looking for evidence of this phenomenon.

The damage caused by an earthquake depends on a number of variables. One is the strength of the quake; another is the composition of the ground—soft soils, for example, tend to amplify the shaking more than solid rock. A third is the decrease in shaking with increasing distance from the source­ the so-called “attenuation” of a quake.

Attenuation can be estimated by measuring the amplitude of the shaking with strong-motion seismometers at varying distances from an earthquake’s source, and also by analysis of “felt reports,” in which individuals give their personal assessment of the strength of the shaking. Over a thousand felt reports have been received following the Fiordland quake and are being analysed at GNS. But by far the most information is coming from the nearly 200 strong-motion seismometers that have been upgraded or newly deployed throughout the country over the past two years as part of the GeoNet project. The earthquake was recorded by 60 of these, at locations ranging from Manapouri to Taumarunui. The combined data so acquired constitute the best set of information on attenuation ever recorded in New Zealand, and will almost certainly lead to improvements in earthquake-hazard estimation and building codes.

The question most often asked after a big earthquake is: does this increase the likelihood that other large quakes will follow? This is not an easy question to answer. While it is certainly true that a major shake can affect the stress, or pressure, acting on other faults nearby, this can make an earthquake on one of those faults either more or less likely.

Over the past decade, scientists have come up with ways of calculating the changes in stress an earthquake produces on neighbouring faults. This does not mean they can predict earthquakes, but it does mean they can assess whether a quake is more or less probable. In the case of the Fiordland event, we are sure from the GPS results and the well-located aftershocks that it occurred on the subduction interface. The question immediately arises, therefore: what effect has it had on the nearby Alpine Fault. Preliminary calculations suggest that the likelihood of an earthquake on either the eastern or western branch of the Alpine Fault has been increased.

The earthquake threat popularly known as “the big one” would be made manifest by a major slip—of perhaps 4 to 8 m along several hundred kilometres of the Alpine Fault. The last time this happened is believed to have been in 1717. The Fiordland event has made an Alpine Fault earthquake slightly more likely.