In late july of this year, a family on a fishing expedi­tion to the northern end of Muriwai Beach, northwest of Auckland, came upon the carcasses of two freshly dead whales. With the aid of a cellphone, they notified the Department of Conservation (DoC) of their find. It turned out that the whales belonged to the rarest species of baleen whale, the pygmy right whale, of which only a dozen specimens had been found in New Zealand previously, and not many more elsewhere in the world.

The pair were a full-grown six-metre female and her two-metre calf. “The state of the umbilical cord suggested that the calf was less than a week old,” said Jo Ritchie of DoC. “It is the first time a calf that is clearly newborn has been found anywhere in the world.”

The site of the stranding was close to the RNZAF Kaipara weapons range, and a call to the air force for help promptly brought a helicop­ter with 11 men from Whenuapai air base. How­ever, it proved impossible to move the female by hand, and a log carrier from nearby Woodhill forest was pressed into service to carry her to the roadhead. “When they lifted her up, milk just poured out of her mammary glands,” said Ritchie.

Both mother and calf were transferred to cold storage at Massey Universi­ty’s Cetacean Research Centre, where they joined a third young whale of the same species, also found at Muriwai two years ago. “Finding two calves in the same area is most exciting, because it strongly suggests that the species is breeding along this part of the west coast,” Ritchie explained.

Pygmy right whales have occasionally been seen or found stranded around South Africa, Tierra del Fuego and  southern Australia, including Tasmania. Sightings at sea have been few—partly because the pygmy right is about as inconspicuous as a whale can be. This is not a whale which indulges in the acrobatics performed by many other types, and its flukes are never lifted from the water. It spends little time on the surface, and its blow is indistinct. Only the snout breaks the water when the whale comes up to breathe.

One distinguishing feature of the pygmy right is the dorsal fin two-thirds of the way back along its body, a feature which right and  gray whales lack. However, because the pygmy right rarely exposes its back, the fin is not spotted frequently.

The mode of swimming adopted by this whale is distinctive. The whole body is thrown into a series of up-and-down undulations, rather than only the tail flukes being raised and lowered, as in other whales.

So unusual was the opportunity afforded by Massey’s freezer full of whales that three biologists from the Smithsonian Institution in Washington D.C. and one each from Australia and Japan visited in late August to dissect the whales. Their skeletons will eventually grace the National Museum in Wellington. 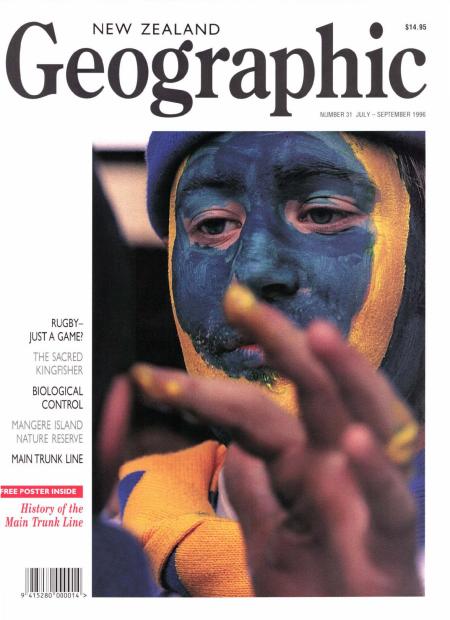