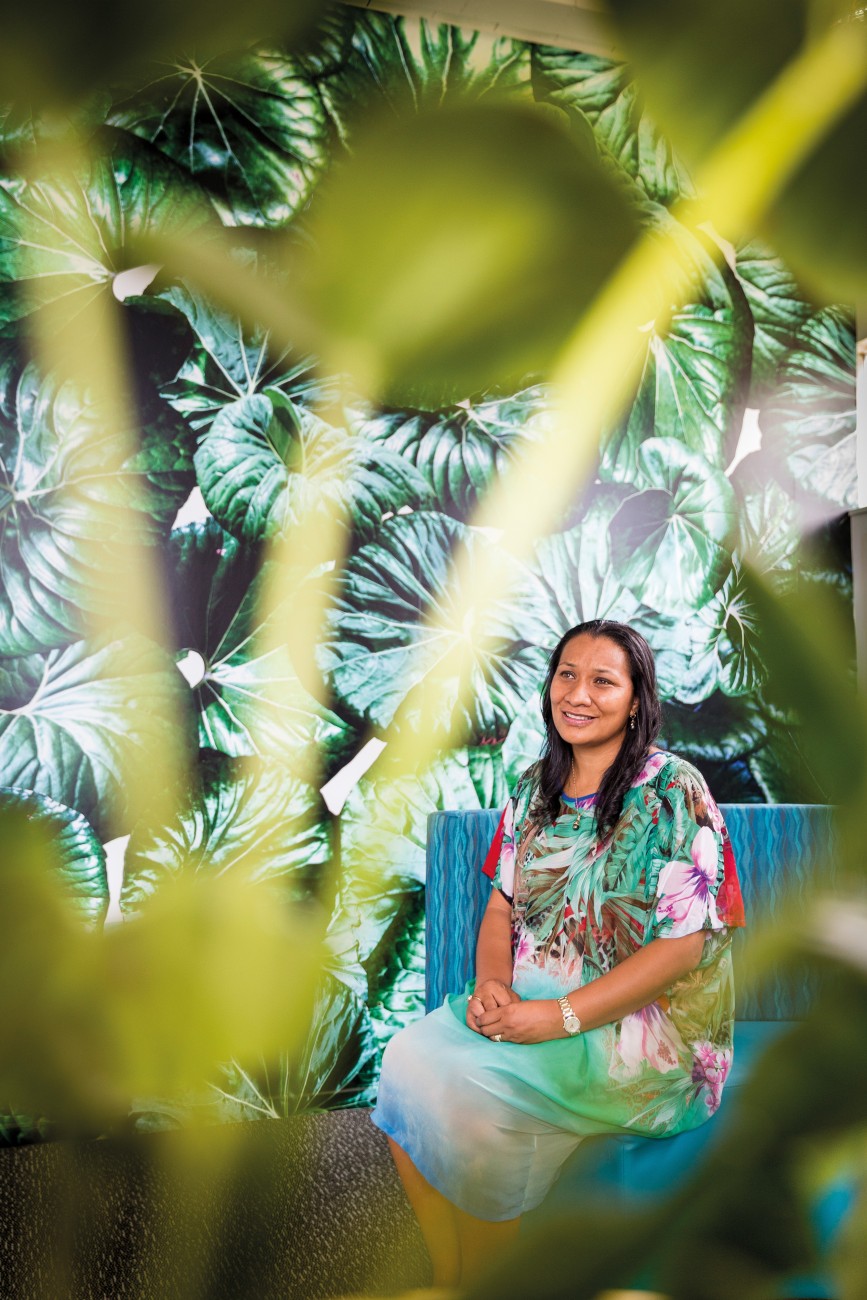 The corridors of Pacific Advance Senior School (PASS) still smell like new carpet and fresh paint. Emeline Afeaki-Mafile’o greets everyone she passes by name: the lavalava-clad principal, a sombre student who brightens into a smile at the sight of her, a pair of builders who wander past. Classes started a week ago, but some rooms of the two-storey Otahuhu complex are still under construction. As well as PASS, it will host Afeaki-Mafile’o’s social services agency, Affirming Works, and a community cafe. It’s all her idea: “A broader approach to education and social development,” she says.

A first-generation New Zealander with Tongan, Samoan and Māori roots, Afeaki­Mafile’o surprised her parents by leaving her childhood home in Mangere to attend univer­sity—they were expecting her to move out only upon her marriage, as is the Tongan way.

Three qualifications in social work later, Afeaki-Mafile’o remains fascinated by the notion of unsettlement that comes from growing up as a migrant’s child. “Parents take for granted where they grew up, in a context where their culture was very strong and they understand why things are done. But in New Zealand, our parents’ behaviour isn’t so clear to us, and I think a lot of my counselling is around that.”

Afeaki-Mafile’o describes meeting a girl who was furious at her controlling aunt; she didn’t understand that in Tonga, her father’s sisters wield a special cultural authority over her. “I had to explain her auntie’s role in Tongan culture, and how honourable that was. There was this big revelation around what was going on in her household.”

These are the kinds of situations that Affirming Works has been untangling for the past 14 years. Afeaki-Mafile’o started the agency at 25, running it for two years out of her Papatoetoe flat on donations and church tithes before gaining government funding. It was the first in New Zealand to specialise in mentoring Pasifika teens; it has reached around 5000 high schoolers and continues to operate in four South Auckland colleges. PASS is designed for students who aren’t succeeding in those schools.

In many cases, adapting comes down to being comfortable with discomfort. “We call it ‘awkward spaces’,” she says. “Feeling awkward in those spaces has allowed me to have a sense of confidence. I find that the discomfort really draws the effectiveness from you.”

Doesn’t she get tired of always being the person to reach out, to modify her behaviour so that another culture finds it easier to relate to? “I used to want to blame non-Pacific people because they didn’t understand,” she says. “But I’ve seen sometimes that we’re our own worst enemy because we don’t want to cross over either. I understand that not everyone can cross over, so I embrace being that middle person. Because I’m so different from them, it gives me permission to say things they probably can’t say.”

Afeaki-Mafile’o also brings together busi­nesses and non-profits, grassroots commu­nity and government policy. Through Fofola Consulting, which she started in 2004, she wrote the Auckland Pacific Youth Strategy, plus documents on gang prevention and family violence for the Ministry of Social Development.

She stresses that her talent lies in being a mouthpiece for an overlooked resource: local knowledge.

She’s the kind of person who sits down with Tongan-speaking community elders in order to ensure their voices are heard. “I’m just drawing and engaging all the existing players,” she says. “There are people in their community doing these works, most without any recognition. I add dignity to their work by recognising they’re the experts in these areas.”

She’s helping a hapu in Turangi create a Māori immersion programme, where Pakeha can dip into te reo for two or three days and learn their own mihi. “It’s about under­standing themselves, but they won’t realise it. They’ll go thinking, ‘Oh I’ll go and understand Māori’, but really they’ll come away thinking, ‘Man I understand myself more’. Tonga has been that for me.”

After deciding Otahuhu needed a commu­nity cafe, Afeaki-Mafile’o called a coffee supplier on Tongatapu, only to be offered the entire business: it was in liquidation. She and her husband remortgaged their home and moved to Tonga to manage it. It employs about 80 people on 10 co-operative farms, comprises 100 per cent of Tonga’s coffee industry, and helps fund her community work there and in New Zealand.

In the midst of rapid-fire project development, Afeaki-Mafile’o’s goal is to stay attuned to the community’s require­ments, rather than pursue existing funding opportunities or government contracts. “I’m always trying to tell my team not to fall into the contract approach,” she says. “We got a grant two years after we started the cafe. It’s never happened before.”

Her next challenge is to train commu­nity workers to look outside their area of specialisation. “It’s about moving them from a dependency model, which is fulfilling contrac­tual requirements, into a social entrepreneur­ship model. I’m really fortunate that I’m now in a position where I can just go, ‘This is what needs to happen’, and people are like, ‘Cool’. That’s because of the mana of the work that I’ve done.”