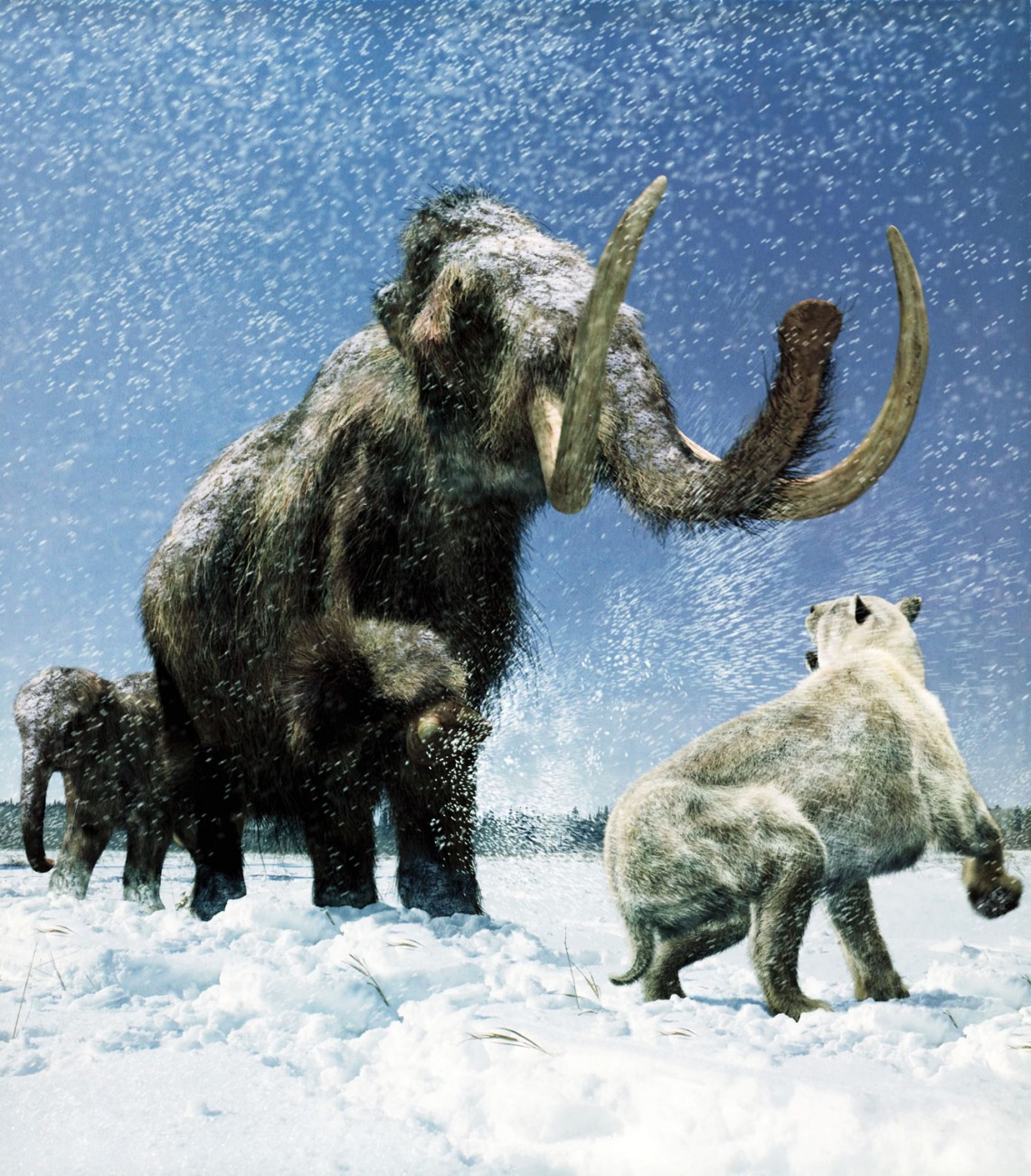 Ice cores drilled through the Greenland and Antarctic ice sheets have allowed climatologists to track changes in global air temperatures over the past 400,000 years. The data reveals that humans may have been altering the climate since hunters met mammoths and giant sloths roaming the Americas.

Variations in the ratio of oxygen 16 to heavier oxygen 18 atoms in the water correspond to changes in global air temperatures, and bubbles of air trapped in the ice also enable the atmospheric concentration of gases such as carbon dioxide and methane to be measured over the same time period.

The results show the air temperature cooling to a minimum and then abruptly warming about every 100,000 years. At the coldest times, known as glacial maximums, so much water was locked up in the continental ice sheets that the sea level was around 120 metres lower than today. The global average temperature was about 5ºC colder at the glacial maximums compared to the warm interglacial periods, such as the one we have enjoyed for the past 10,000 years.

These abrupt periods of warming appear to be driven by regular changes in the Earth’s orbit around the sun, which intensifies the sunlight reaching the Northern Hemisphere during summer every 100,000 years. Coming out of a glacial maximum, the temperature rapidly warms and concentrations of carbon dioxide and methane in the atmosphere also rise rapidly, further enhancing the greenhouse effect.

The ice sheets are so large they take thousands of years to melt. But before they dwindle to their smallest extent, the atmospheric concentration of carbon dioxide begins to drop again. During the current interglacial period, this decrease began about 11,000 years ago. But then, around 8000 years ago, the carbon dioxide concentration began to rise. Compared to the previous interglacial periods, something was very different. According to climatologist William Ruddiman in Plows, Plagues & Petroleum: How Humans Took Control of Climate, the increase in carbon dioxide was probably caused by humans inventing farming.

As the cultivation of wheat spread out from the Middle East across Europe and Asia, huge areas of forest were gradually cut down, releasing large amounts of carbon dioxide into the atmosphere. Archaeologists have been able to trace this process across Europe by measuring the changes in pollen contained in lake sediments. Some idea of the extent of deforestation comes from the Domesday Survey, undertaken for William the Conqueror in 1086. This records that 85 per cent of England’s countryside was deforested by that time.

Another change to the atmosphere began about 5000 years ago when the amount of methane in the atmosphere, which had been declining, started to increase steadily. This coincided with farmers in Asia flooding their fields for wet rice cultivation—decaying plants in the rice paddies produce substantial amounts of methane.

The effect of increasing atmospheric carbon dioxide and methane has been to enhance the greenhouse effect, keeping the world warmer than it otherwise would be. But for agriculture, Ruddiman says, computer modelling indicates the world could have cooled almost halfway back to another glacial maximum. In fact, climatologists consider the climate during the rise of civilisation over the past 10,000 years anomalously stable compared to the frequent abrupt changes seen in the long-term ice core record. Even so, the climate has delivered some hard shocks in recent millennia. The Little Ice Age, from the 1500s to the late 1800s, was one, and the cool period at the end of the Roman Empire another.

Both of these, Ruddiman argues, may have been partly caused by sharp declines in agriculture as a result of pandemics. The outbreak of plague known as The Black Death in 1347 is estimated to have killed one-third of the population from India to Iceland in a few years. Consequently, large areas of farmland gradually reverted to forest, taking substantial amounts of carbon dioxide from the atmosphere, which lessened the greenhouse effect and cooled global temperatures. The outbreak of plague in 540 AD, known as the Justinian Plague, appears to have been equally lethal.

While Ruddiman’s work pushes significant human influence on the climate back to 8000 years ago, a letter published in Nature Geoscience in June argues for an even earlier impact, around 13,000 years ago. At this time, human hunters reached the Americas. Within a few hundred years, more than 100 species of herbivorous animals became extinct. These included a number of large species such as the mammoth, mastodon, long-horned bison, dromedary, a large-headed llama, three species of horse, flat-headed peccary, stag-moose, musk ox and giant ground sloths.

The largest sloths, known as megatheres, were truly amazing animals. Some skeletons are six metres long. Their hind feet were a metre long, presumably to support their three-tonne weight when they were feeding upright. The forefeet had 30 cm-long claws and their skin contained many thousands of embedded pebble-like bones.

The characteristic weapon used by humans to hunt this mega-fauna was a spear with a long, finely worked stone tip known as a Clovis point. Some mammoth skeletons have been excavated with multiple spear tips among the bones. Ecologists do not think humans killed all the animals, instead believing that the addition of other top predators destabilised the system. Now also extinct, they included the sabre tooth tiger, scimitar cat, new world cheetah, dire wolf, American lion (which was twice the weight of the African lion), short-faced bears (the largest meat-eating mammal ever), many birds of prey and a giant vampire bat.

Scientists at the University of New Mexico have calculated how much methane the extinct herbivores are likely to have emitted and found that their rapid disappearance explains a substantial part of the drop in atmospheric methane found in the ice core air bubbles at this time. This drop in methane, the researchers argue, played a role in the rapid cooling known as the Younger Dryas period between 10,800 and 9500 BC.

These studies show just how sensitive climate is to changes in greenhouse gases. But the changes we are making now—burning fossil fuels—are much greater than those caused by early agriculture. The climate system is, in the words of climatologist Wallace Broecker, “a capricious beast, and we are poking it with a sharp stick”.