Round here, we have a lot of song thrushes. Come spring, my wife and I can look forward to a 5.15AM wake-up call from one that’s chosen a soundstage right behind our bedroom window.

This guy sings as though his fate hangs on the judges’ scores. And that, of course, is exactly what’s going on.

We all know that male birds sing to impress a female, so that she might allow him a bit of fooling around, in turn that his DNA might secure him some sort of immortality. For a songbird, sleeping in is a fast track to obscurity. 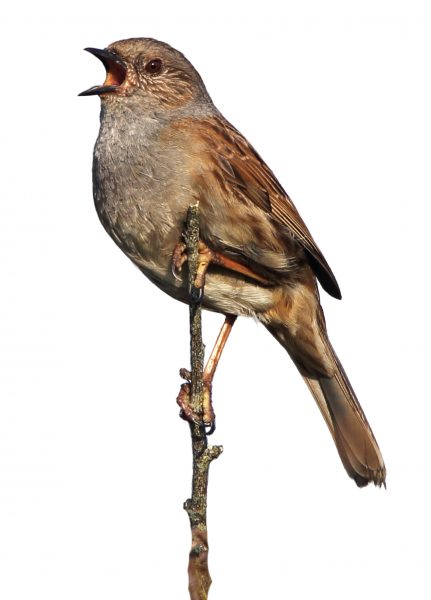 For centuries, birds of all feathers have been eulogised as paragons of virtue, leveraging monogamy to further their kind in faithful devotion. Until the 1990s, that is, when ornithologists got access to DNA profiling, and found that females of many species weren’t always playing at home.

It turns out the early bird isn’t getting the worm: it’s getting laid. At the first peep of day, while most humans are still slumbering, songbirds are fornicating like it’s 1970.

Females of many species slip away from their partners to get a little action. They do most of their philandering before sun-up, so males have two imperatives to set the alarm—first: to be ready, willing and able to service any floozies that come bob, bob, bobbing along; and second: to keep a wary eye on their own mate.

Since 1988, scientists from the Australian National University at Canberra have followed the dalliances of radio-tagged superb fairy-wrens in the National Botanic Gardens, plotting their pre-dawn dalliances. Superb fairy-wrens are the Olympians of off-campus couplings. A few days before egg-laying, at the peak of their fertility, females slip away from their nominal mates to visit the singing perches of the most mellifluous males, one after another. Studies have shown that male fairy-wrens sing two distinct soundtracks—one is complex and variable, but the other is a rote trill, and that’s the one that gets the girls going. Those males that can hold that trill the longest have the best mornings.

This extramarital prospecting by females has shaped fairy-wren society; they control the sexual dynamic of the species. Males begin singing at the same time of the year, every year, whether they’re up to prime condition or not. They will all sing a similar rendition of the most successful trill song. Subordinate males try to cadge a piece of the action by singing as close to the territories of dominant males as they can, and will even risk a beating by singing from a maestro’s perch.

The same behaviour has been studied in saltmarsh sparrows, threatened along the lower eastern US seaboard, where paternity tests revealed that 57 out of 60 profiled broods had at least two chicks with different fathers. Around 97 per cent of females were routinely mating with more than one male.

Red jungle fowl, the progenitors of the ordinary barnyard chook, sleep around too, and researchers have found that, while females make some effort to select the fittest-looking or -sounding males, they leave the ultimate decision to a little-understood process called ‘cryptic female choice’. The sperm of several different males can remain separate and viable inside the female at the same time. Somehow, within her reproductive tract, is a selection mechanism that can detect the DNA that is most dissimilar to her own and which would add the most beneficial diversity to protect her offspring from disease or infection.

That’s because inbreeding is rarely a good thing. Generations of intermarriage in the House of Habsburg—for instance—left the heir to the genetic legacy, Charles II of Spain, with a jaw so horribly distorted that he had trouble chewing his food. The Habsburg Jaw continues to haunt the royal families of Europe even generations later.

In the same way, the offspring of closely related parents are often smaller, less viable and fertile than the descendants of animals that pursue promiscuity more vigorously. Our own little honeyeater, the threatened hihi, has been shown to suffer poor chick survivorship when cousins start kissing. Like the superb fairy-wren, hihi are considered polygynandrous, which means multiple males might have an exclusive sexual relationship with multiple females. (Another bird here in New Zealand, the introduced dunnock, does the same thing.) Hihi are at just a fraction of their former numbers and range, and it’s thought that polygynandry might confer greater genetic diversity upon a lessened bloodline. The hihi might just be responding to its own rarity.

Like the fairy-wrens, promiscuity has defined hihi society, but it’s also shaped the hihi itself. When you’re competing with other males for a slice of the action, it helps if you’re packing: hihi sport testicles four times bigger than is typical for their body size, and produce prodigious quantities of sperm in a cloacal protuberance three times the norm. It’s an endowment that enables a still-greater distinction—hihi are the only bird yet known to mate in the missionary position.

Thanks to our social and doctrinal conditioning, we tend to think that each new life is the product of just two clean-living, loving parents, but in fact, that Disneyesque fancy is rare in the real world.

Pitting sperm against sperm is part of nature’s quality control—in flatworms, flies and flounders. We shouldn’t be surprised that females have worked out how to exploit that contest to their greatest advantage: early in their cycle, female chimpanzees will deliberately mate with subordinate males, but at their oestrus zenith, they will also mate with dominant males to secure the best available genes. This show of sleeping around obscures the paternity of their offspring so that challenging alpha males are less likely to kill the infants.

In some birds, females will deliberately mate with a subordinate male, thereby engaging a devoted nest builder and chick-rearer, only to later steal away and mate in secret with his dominant superior. She’s secured the best of both worlds, and the alpha male has passed on his DNA without even having to do any of the heavy lifting. Nice guys finish last.

The females of some spiders and praying mantises take male exploitation to a cannibalistic conclusion, devouring their lover once he’s relinquished his sperm. The sustenance from his corpse grants their eggs extra vitality.

However it manifests, female mate-selection—and manipulation—is a prime driver of animal behaviour, physiology and the fabric of evolution. It is the individual choices of billions of females across the planet every day that determine the fate of species. All males can do is try to keep up…