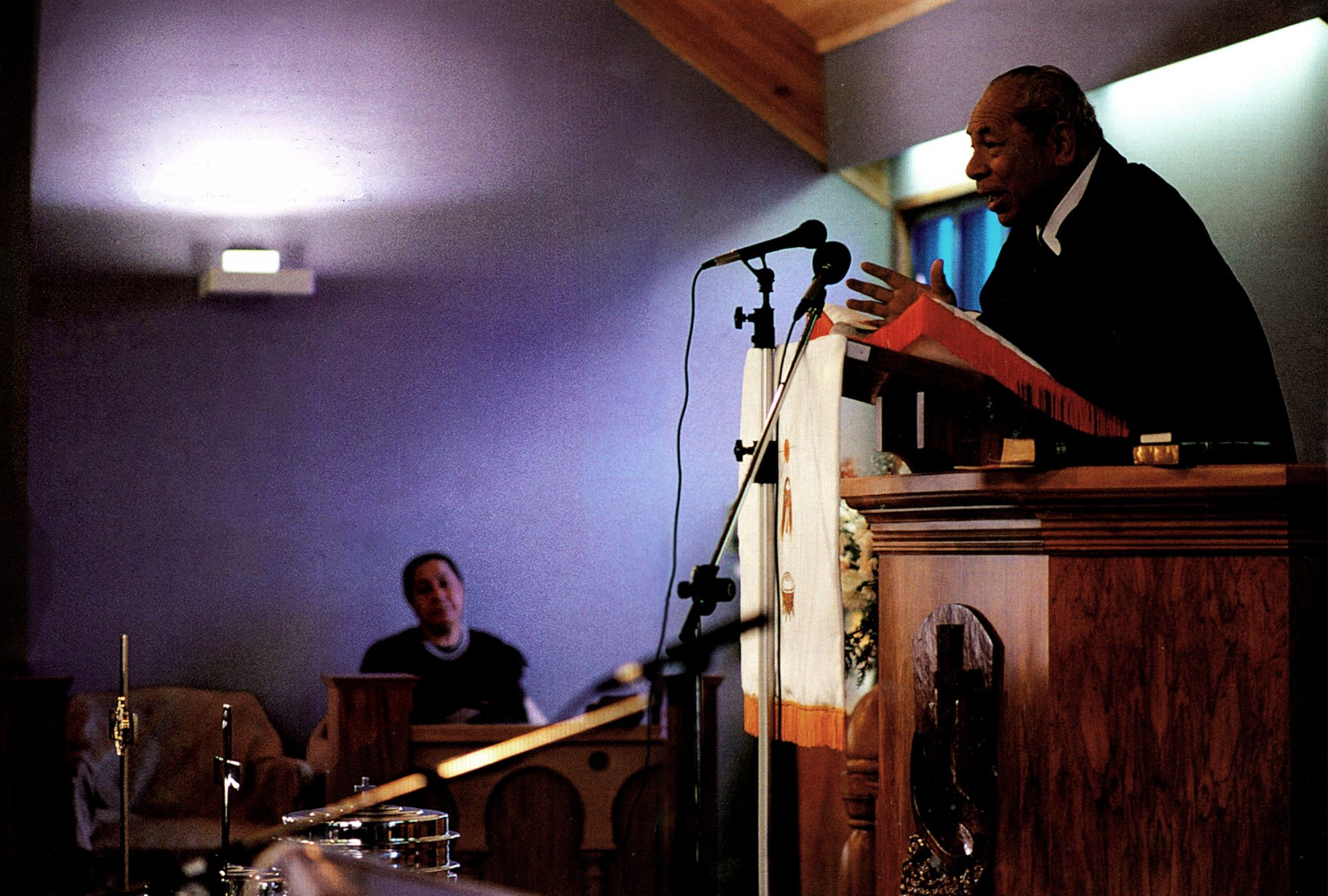 Tongans are amongst the most Christianised of people, and the Wesleyan Church in Tonga has long been a focus of community life.

When a Tongan community is transplanted by immigration from the warm cosiness of the tropics to somewhere big, cold and alien like Auckland city, the church assumes an even greater importance—it becomes the main ingredient in the cultural glue which keeps the community intact.

Since there are not that many Tongan communities around the world, building a new Tongan Methodist Church in Auckland is an event of significance to all Tongans everywhere, and a step of national importance. It is also an uncommon event, one which photographer Glenn Jowitt documented from the final tearful service held in the old, cramped St Jude’s church to the joyful celebrations that accompanied the occupation of the new church complex 11 months later.

Prayer and speeches of dedica­tion, singing, dancing and feasting marked the construction milestones of the new sanctuary.

Less than a week after the final service in the old church, the foundation for the new complex was laid on the same site in the suburb of Grey Lynn. As befitted an occasion of such importance, the King and Queen of Tonga, after enjoying a cup of tea served by impeccably attired aides, placed the first spadefuls of concrete in the ground.

Six enormous pigs garlanded with leaves were among the traditional gifts presented to the King as tokens of appreciation and respect by the local congregation.

Radiant in bright costumes made from materials brought in from Tonga, and slick with coconut oil scented by leaves of Tongan trees, young women dance both to entertain and raise funds.

Representing and supported by various community and family groups, each is traditionally rewarded with money as a sign of appreciation for a sterling performance.

Money so gathered goes not to the dancer, but to the church treasurer for the building fund, although on other occasions it may be used to assist the family or help with educational costs.

Onlookers caught up in the spirit of the occasion dance along with `Atu’amua Vaea (above), the grand­daughter of the Premier of Tonga.

Matriarchs, relaxing from the work of catering and hospitality, keep a watchful eye on proceedings. The congrega­tion—especially the women—laboured for days to prepare the mountains of food required for each of the major celebrations held during the course of construction.

Men concentrated on roasting pigs and preparing umu—in­ground ovens similar to hangi. Of course, there was no shortage of people prepared to help out with consuming the spread!

More than 5000 were fed at the feast celebrating the church opening, including several hundred overseas visitors from Tonga, Australia, the United States and elsewhere. The entire 80-strong Tongan Royal Choir flew in for the occasion.

On the only day without rain for weeks, the first roof beam, carefully wrapped in specially prepared fine mats, was hoisted into a windswept sky above Richmond Road.

Following the dedication ceremony, construction workers, the architect, project manager and congregation enjoyed a feast together in the new basement.

Members of the congregation painstakingly crafted models of both old and new churches in cake as gifts for the King—the red-roofed old church presented when he laid the first foundation, and the gabled new church following the opening.

The King, who made a sizeable donation to the new church, gave away some of the gifts with which he was presented. For instance,Tongan students resident in New Zealand received portions of the six large pigs presented to the King on each of his two visits.

Tongan generosity is legendary. On the day the church was opened, $80,000 was raised for the building fund, and the entire $3.1 million cost of the complex is expected to be met within five years from congre­gational fundraising and donations astonishing generosity from a none-too-affluent congregation numbered only in the hundreds.

Several of the 16 Tongan congre­gations (10,000 members total) around Auckland have built or are considering new premises, so Vaine Mo’onia is not the only church in need of funds.

The completed church complex—seating more than 600, compared with 100 in the old building—was officially opened by the King and Queen on October 29, 1994, and dedicated in a service attended by thousands.

Particularly significant was the presentation of new symbols of worship—silver bowls, a cross, candlesticks, communion vessels—and Bibles. Mounted on the front of the new pulpit is a prized old carving of the “gospel boat,” saved from St Jude’s. (It is visible in the opening photograph). Two striking stained glass windows depicting Jesus under a palm tree feeding the masses and Jesus calming the waves from a Polynesian canoe grace the front of the church.The completed church complex—seating more than 600, compared with 100 in the old building—was officially opened by the King and Queen on October 29, 1994, and dedicated in a service attended by thousands.

The Vaine Moonia complex, however, is much more than simply a place of worship. Indeed, the beautifully crafted sanctuary is not unlike the superstructure on a ship: most of the space is somewhere below. The cavernous basement holds a superb auditorium at least as large as the sanctuary.

Behind the auditorium is a stainless steel kitchen (with walk-in cool store) that could cater for an army battalion. Large underground carparks hold a hundred vehicles on two levels. Lights come on auto­matically as you enter any of the numerous hallways threading the building. It’s all very modern.

Apart from hosting three church services on Sundays (the first at 6 A.M.), the complex is a centre for women’s groups, youth activities, cultural groups, community dinners and the like.

Unlike palagi, Tongans draw no separation between sacred and secular, and at the heart of almost every community activity is the church, the True Vine.