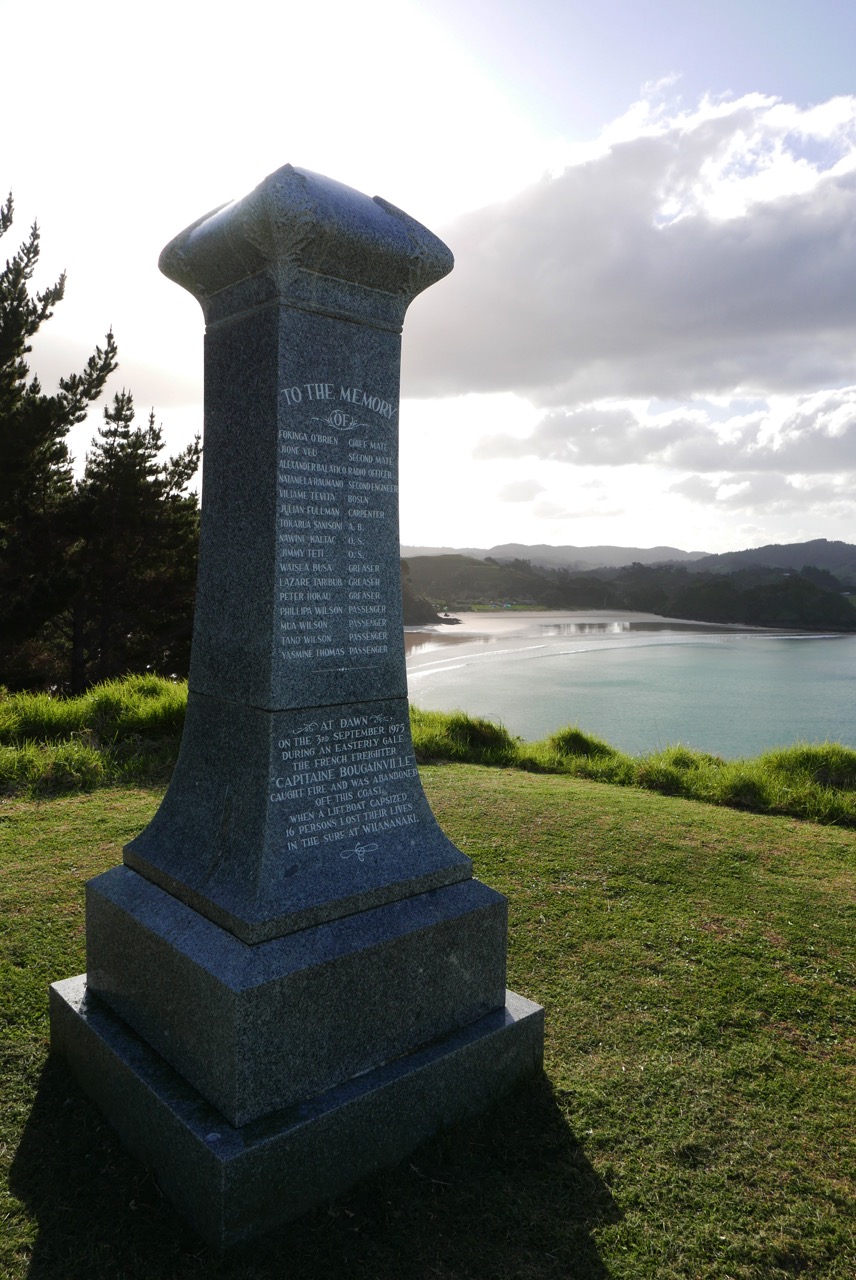 I was passing through the Northland coastal settlement of Whananaki North, and—always keen to push back the frontiers of my ignorance—glanced at the NZ Topo Map website to see what geographical or historical features were identified nearby. My eye fell on the label “Captain Bouganville Monument”, located on a headland a few kilometres south. Assuming it was a memorial of some sort to the great French explorer Louis Antoine de Bougainville, a contemporary of James Cook, I decided to take a look.

The sun was shining and a brisk south-wester blowing as I crossed the Whananaki estuary on what is claimed to be the longest footbridge in the Southern Hemisphere—493 steps, though I wasn’t counting. The tide was ebbing, and the shallow water among the mangroves was clear, giving a view of thick clusters of horn shells grazing on the tidal flats.

I took the road called Te Ara o Tunua, the way of Tunua (named, I believe, for Pita Tunua, a beloved early resident of Whananaki South) to the coast, then walked south as the wind blasted sand across the beach and threw spray off the small surf. Oystercatchers were working the edge of the tide, and the empty shells of a favourite mollusc of mine, the ringed Dosinia, jutted up like castanets on the smooth sand.

I clambered over oyster-covered rocks at Pitokuku Point to reach a sheltered beach, and saw my destination: a three-metre high stone monument on the far headland. A steep climb through pine forest brought me to a freshly mown path to the monument, and I walked to the seaward side to read the inscription.

I immediately saw I had been wrong about the purpose of the memorial. It was not in honour of Bougainville the explorer, but a ship named after him, Capitaine Bougainville, that had come to grief offshore of this location, with the loss of 16 lives. I read slowly through the names of the dead, noticing the predominance of Pacific names—Fokinga, Tevita, Tokarua, Teti—and the jobs they held—greaser, bosun, carpenter.

What startled me was the date. I had assumed by the classical style of the monument it would have marked a shipwreck in the 1800s. Seeing the date “3rd September 1975” took me aback. I wondered why I had no memory of this event.

The inscription concluded: “When a lifeboat capsized 16 persons lost their lives in the surf at Whananaki.” Looking out on a benign sea, I tried to imagine what conditions would have caused the loss of so many. It was only later, reading accounts in the Northern Advocate, that I learned that the waves were estimated to have been 12 metres high and breaking 300 metres offshore.

A fire in the engine room had spread rapidly, filling the ship with smoke and threatening to burn the lifeboats, located directly above. Captain Jean-Raymond Thomas had given the order to abandon ship at 3.40 a.m.

The captain placed his family in the last lifeboat and joined them after all 36 crew and passengers were off the ship. But huge seas whipped up by an easterly gale, coupled with a dark night and strong currents, led to disaster.

“The lifeboat was turned over 10 or a dozen times before we drifted near the beach,” the captain told reporters. “Each time someone lost their grip. My children were washed away, one by one. I was supporting my wife on the keel but at about daylight she died from the cold and exposure and I lost my grip on her.”

And it was then that it dawned on me that I had visited the memorial on the 40th anniversary of the loss of Thomas’s New Zealand-born wife Philippa, their infant child Yasmine and two stepchildren Mua and Tano, along with 12 crew.

As I read the newspaper reports, I took note of the role of Whananaki whanau who had wrapped their arms around the shattered captain as he grieved the loss of his family. Thirty years later, as he recalled the events of 1975 at a memorial service, he singled out his “Maori mother”, Ani Mihi Maki-Cross, who comforted him and subsequently gave him a cloak to symbolise the bond that tragedy had forged between a foreign captain and local whanau.

“It has been very important to me that people around here, in Whananaki, have kept the memory of this tragedy alive,” the captain said.

This statement has stuck in my mind. Place and memory are vitally connected—and Maori understand this better than most. Keeping alive the stories of a place—both the solemn and the joyous—is part of the kaitiaki responsibility we have to the landscapes we inhabit. When stories are lost, the life of a place is diminished.

Captain Thomas was right to praise the Whananaki whanau for their gift of memory, not just to him and his loved ones, but to that stretch of coastline—sparkling and benign on the day I visited, furious and fatal 40 years earlier.

A 40th anniversary memorial service is to be held on Saturday 5 September at the “Captain Bouganville” memorial, as it is referred to in its anglicised version on New Zealand maps.