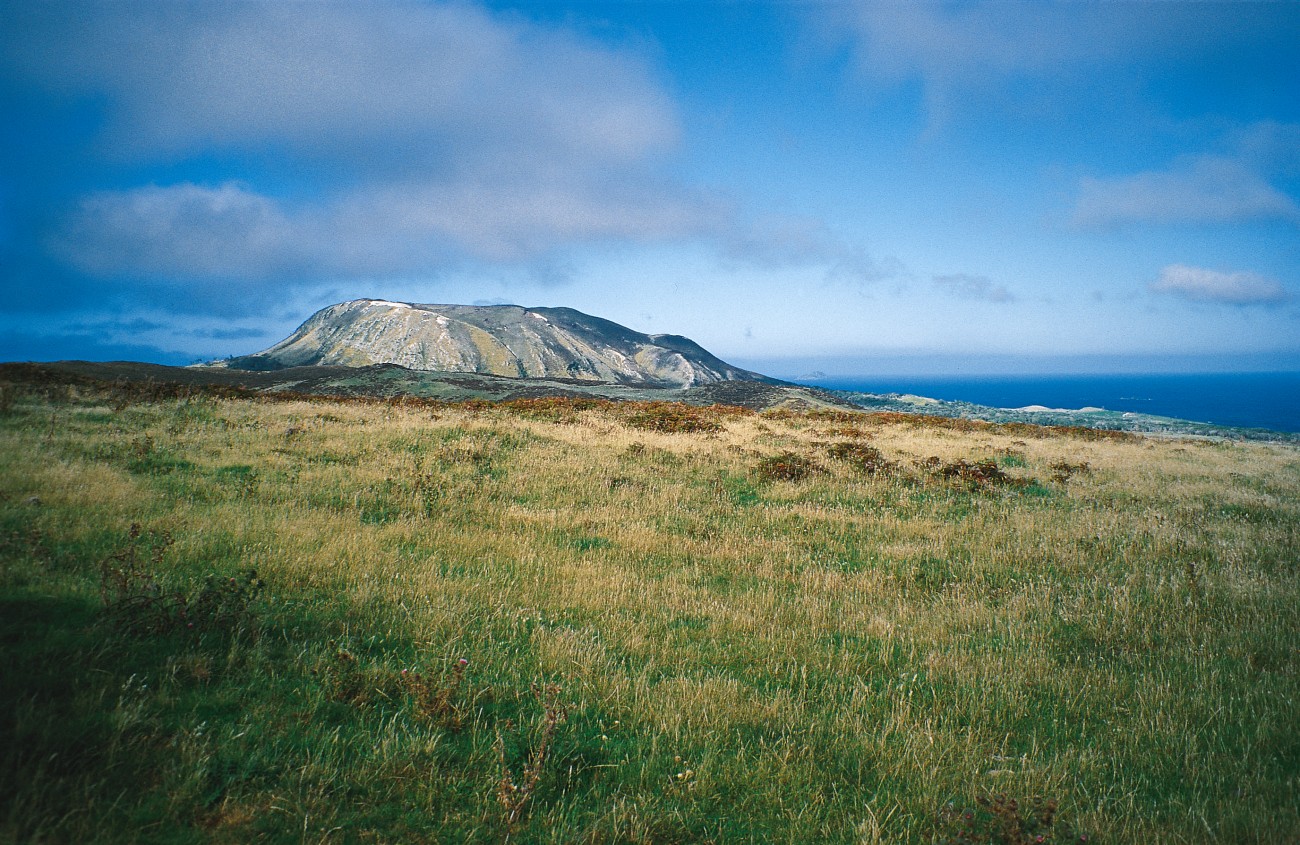 Hakepa Hill, ignored and almost unknown for the past 80 million years, seems an unlikely candidate for fame. Steep-sided, flat-topped, uncluttered by shrub or tree-it is imposing in its own landscape, certainly, but celebrity material?

As it happens, it is an accident of the hill’s location rather than any innate quality which is responsible for the peak’s rise to prominence. For it is the much-vaunted lookout that affords the first glimpse of each day’s dawn-and most notably that of January 1, 2000.

Amidst the hoopla, however, some may wonder what it is, this Hakepa Hill, and why it is there.

Although Hakepa Hill rises to just 229 m above sea level, it seems much higher and grander than its elevation suggests. It stands up like an Ayers Rock to the Chatham Islands, a welcome sentinel to seafarers and a giant pedestal from which to observe the seemingly infinite expanse of the Pacific Ocean off to the east.

The hill is located in the north-east corner of Pitt Island, New Zealand’s easternmost populated real estate. In longitude and latitude terms, it is approximately 1760 10.5′ Wand 4+0 16.5′ S. Strictly speaking, it lies to the east of the 1800 Greenwich meridian, and hence is in the Western Hemisphere, but by a long-established international legal ruling that allows a country to have all its territory within the one hemisphere, it is deemed to lie within the Eastern Hemisphere like the rest of New Zealand. Thanks to this convention, the Chathams can claim to be the first inhabited land to see the dawning of the new day (see New Zealand Geographic, issue 28, for a complete discussion of this vexed topic). Clock-wise, the Chatham Islands are 45 minutes ahead of New Zealand.

Pitt Island, on which Hakepa Hill stands, is 15 km long (N-S) and 7 km wide (E-W) at most. It was named Rangiauria by the indigenous Moriori, a Polynesian people living here when the first European visitors landed in November 1791 as part of Vancouver’s expedition to the Pacific. The island is distinguished for never having been occupied by Maori, who invaded the Chatham Islands in 1835.

Geologically, Hakepa Hill is the remnant of a large lava dome of Late Cretaceous age. It is composed of a distinctive pale-coloured volcanic rock called trachyte, and samples from the summit have been dated, using the potassium-argon method, at 81 plus or minus 2 million years. The eruption that produced this trachyte lava was one of the earliest of a major volcanic episode which gave birth to the Chatham Islands.

At the base of Hakepa Hill are the eroded slopes of the older, Middle Cretaceous sediment that the volcano punched through. These sediments are still soft, and are the remnants of ricer and lake deposits that accumulate on a continental landmass about 100 million to 85 million years ago.

Lignite seams, well-preserved tree stumps, fossil leaves, wood and pollen testify to an ancient forest and swamp environment. Dinosaurs would have roamed this place (though no bones or teeth have yet been found) at a time when New Zealand was still part of Gondwana. These ancient sediments are the oldest fossiliferous rocks known from the Chathams, and only occur on Pitt Island.

The top of Hakepa Hill is remarkably flat, cut by the sea probably within the past five million years. When the sea created this level surface it left a calling card: well rounded pebbles and cobbles, which can be seen near the summit and could only have been formed by moving water, wither in a river or on a beach. They are all that remains of a blanket of sediment that has eroded away as Pitt Island and Hakepa Hill have rise out of the sea.

There is much geological evidence in the landscape supporting the idea that the entire land area of the Chatham Islands has risen out of the sea within the Past five million years, and all high points on the islands appear to have flat, wave-cut surfaces. If this theory proves to be correct, then it follows that all freshwater and territorial ecosystems in the Chathams must be very young, for all plants, animals and insects must have arrived since the islands rose above the waves. Such a scenario would have major implications for rates of dispersal, establishment and speciation among terrestrial organism on the Chathams.

The top of Hakepa Hill is notable for the presence of at least 12 sink-holes, some of which have been explored. Their depth is unknown, but it certainly tens of metres in some cases. Near the surface, these cool, wet, dark conduits sport some interesting vegetation. They are probably places of refuge for plant species that would otherwise be devoured by the sheep and cattle that graze Hakepa Hill. The holes themselves are erosional features, and may be the remains of hydrothermal fissures or weaknesses in the rock that have become passageways for fluids. Fluids promote the breaking down of minerals to clays, which then erode away.

From a distance, Hakepa Hill appears to have livid white patches. These are exposures of bare trachyte poking through the overlying mantle of peat. The peat, up to two metres thick, is considered to be less than 30,000 years old and is dominantly composed of Dracophyllum vegetation and associated swamp plants, which must have thrived (and still do) all over the Chatham Islands during this period.

Hakepa Hill is a beautiful, remote place On its eastern flank are several homes that belong to Lanauze family, New Zealand’s eastern most permanent inhabitants. They live in one of the most stable part of New Zealand tectonically, far out on the Pacific Plate, 1000 km away from the active collision zone with the Australian Plate that we call the mainland.

However, the Pacific Plate is moving in a westerly direction at rates of between 25 and 50 mm per year, so given enough time the Chathams will be somewhere else, and Hakepa will no longer have a claim on being the first place on Earth to see daylight.