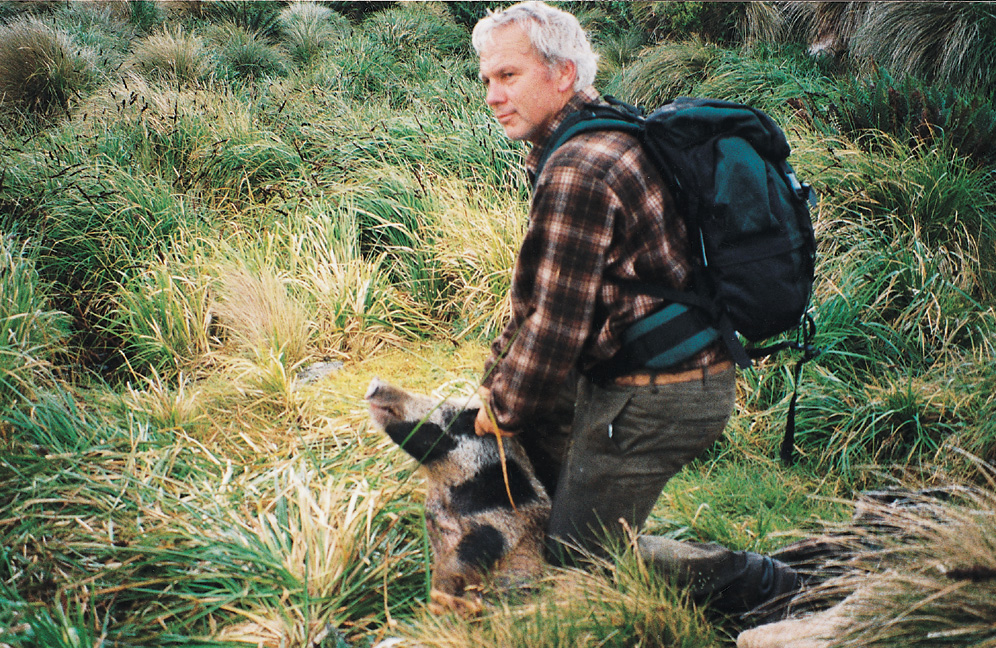 Pigs which have grazed on the subantarctic Auckland Islands for almost 200 years are living on borrowed time. Within 10 years, if Depart­ment of Conservation plans go ahead, the animals will be eradicated.

The first release, thought to be of long-snouted Asian pigs from the Philippines, took place in 1807 to provide food for shipwreck victims. When an attempt was made to farm the islands in the 1840s and ’50s, more pigs were introduced, this time of English stock from the Chathams. Once farming was abandoned, the remain­ing pigs ran wild.

For the past 150 years they have been an isolated population free from human interference.

DoC, the islands’ custodian, estimates that there are 500 to 1000 feral pigs on the main island. The decision to exterminate the animals is based on the extensive damage they cause to the unique plants and animals.

On Enderby Island, where pigs are absent, ground-nesting seabirds are plentiful, but on the much larger Auckland Island there are only a modest number of penguins, and one or two pairs of albatross.

Megaherbs, flourishing on Enderby since the removal of cattle and rabbits, are restricted to steep, inaccessible cliffs on Auckland Island.

In mid January this year, the Rare Breeds Conserva­tion Society mounted an expedition to save some of these pigs before the slaughter commenced.

Twenty-two of us, including three from TV1’s Country Calendar programme and a DoC representative, steamed out of Bluff aboard Sea Surveyor for the 460 km voyage-into seas so wild that even our pig dogs were thrown off colour.

DoC had suggested that the pigs would be found on the open tops of 67,500 ha Auckland Island. Hunting with dogs failed to turn up any sign on the tops, but one party caught a boar and the other party a sow, both near sea level. Cages were hastily put together from wire mesh, and the pigs given sedatives and anti-biotics and left to recuperate in confinement.

The following day three boars and two sows were caught close to the coast, one of the party receiving a rip in the leg from a boar in the process. This incident highlighted the difficulties of catching pigs on the island. In many places walking was easy, through an open tangle of southern rata, but else­where waist-high ferns or tussock totally obscured the ground. Although movement of the leaves and fronds showed where a dog had a pig bailed up, you could not see exactly how close it was or which way it was facing. Only once you got down on hands and knees under the canopy could you fully appreciate the situation.

Not being able to see where you were walking was a bit of a worry. Would your next step be into a deep bog or onto a sleeping sea lion? One member leading a party on his hands and knees underneath some harsh growth was suddenly brought up short by a huge male sea lion barking not two metres from his face.

Hunting on the island involved other differences from back on the mainland. These pigs did not squeal, and keeping track of the dogs was a major battle. While the dogs barked while chasing a pig, but they could not bark while they had hold of it. Noise from the waves crashing on the rocks and the wind in the trees made finding dogs holding pigs impossible at times, even at less than 100 metres’ range. Radio-tracking collars were attached to dogs so we could locate them in the event of real difficulty.

The pigs were completely innocent of experience about hunting. Some, in the open, just stood still until the dogs grabbed them.

Most of the pigs were black, with some black and tan. Their hair was long, and in some the eyebrows had particularly long hairs. The long, dished noses dropped away from very closely spaced eyes, and the tails were long and straight to the ground.

Two of our party were continually around the penned pigs and, to our delight, the pigs were feeding from their hands within a few days of capture.

Hunger appeared to be the pigs’ constant compan­ion. All those captured except two young boars were in light condition—in fact, so light (35-50 kg) that a man could easily carry one. The suckling sows had only two or three teats producing milk, which told how few piglets survived, because piglets stay with the teat they first seize after birth.

Over the years, the pigs have cleaned out most of the edible plants, including the striking megaherbs, and they would certainly take eggs and chicks of ground-laying birds when available, but few remain on the island. We saw pigs (and skua) devour­ing sea lion carcasses.

Rooting damage—often significant on the main­land—is here minor, simply because there is little food to be got by digging. Food of any sort for the pigs seemed to be in short supply.

One of the delights while hunting was to hear bellbirds and watch tuis bouncing through the air, catching big blowflies. One day I inad­vertently left the but door open for two hours and learnt firsthand the reason that Allan W. Eden, the
surveyor of the 1940s, described flies as being the single worst experience on the island. After spraying the window, I cleared one-and-a-half shovelfuls of flies off the floor l

Our first pigs were captured from Port Ross at the northern end of Auck­land Island, but we later took some from Carnley Harbour in the south to make our sample more representative.

In total, 17 pigs were captured and, with some difficulty, transferred to Sea Surveyor. All survived the trip to Invercargill in good shape and were placed in quarantine in the old piggery of the Invercargill Hospital.

The Ministry of Agricul­ture and Forestry treats animals reaching the mainland from the subantarctic islands as arrivals from a foreign country. They will remain in quarantine until the ministry is satisfied that they pose no danger to mainland livestock. In the meantime, they have increased magnifi­cently in weight, and become quite sociable.

The ultimate fate of these pigs is to form the nucleus of captive breeding populations, certainly in New Zealand and perhaps elsewhere in the world.

Southland has decided that these subantarctic castaway animals—not just the pigs, but the cows and rabbits retrieved previ­ously—are part of its heritage, and has formed a trust headed by Invercargill mayor Tim Shadbolt. It is expected that this trust will oversee the breeding programme and operate it for the Rare Breeds Conser­vation Society.

Curiously, despite its indifference to the animals’ fate and to all this voluntary activity, the government remains the owner of all these animals and whatever genetic potential they might hold.