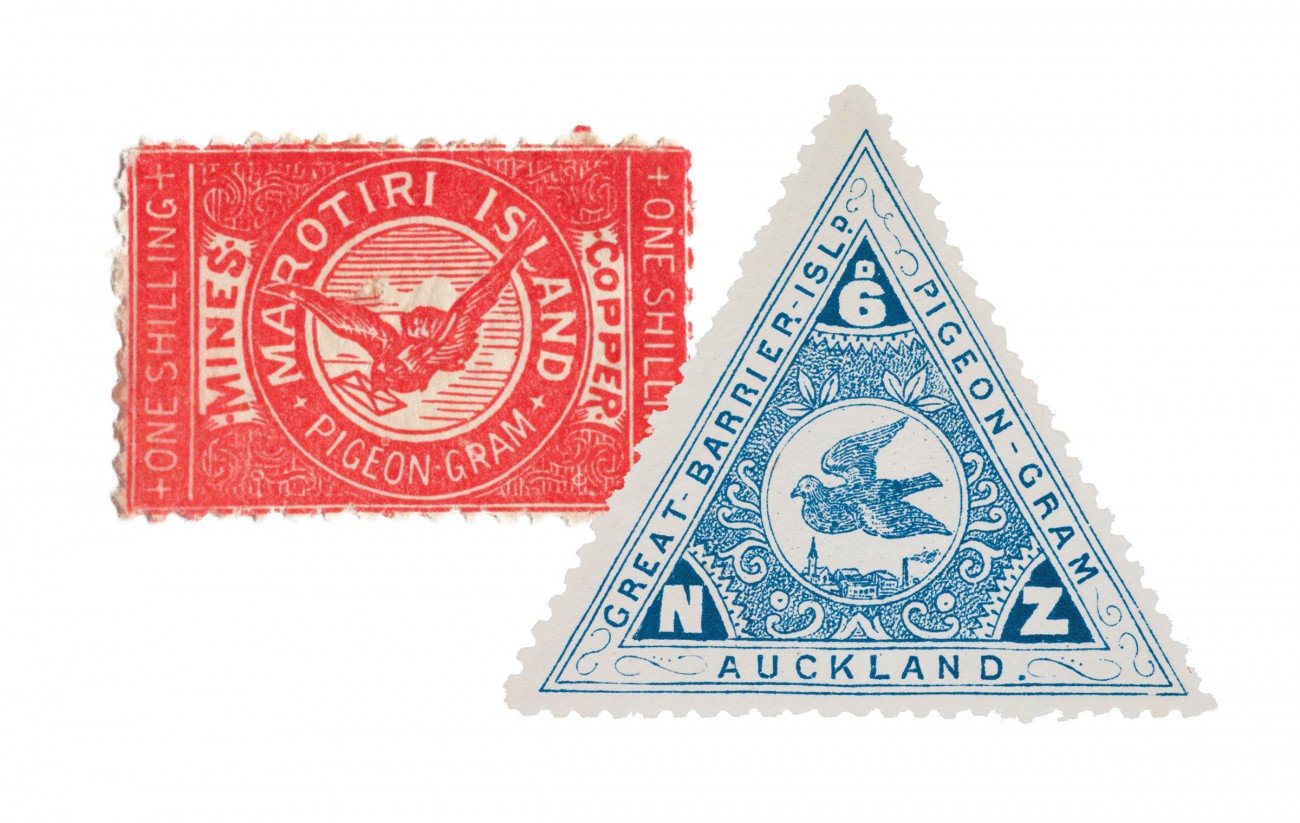 In 1896 a New Zealand Herald reporter travelled with the Northern Steamship Company to Great Barrier Island, a journey commemorating the 145 lives that had been lost two years earlier when the steamship S.S. Wairarapa struck rocks at the northern end of the island. Accompanying him was a pigeon, Ariel, owned by Auckland-based pigeon fancier Walter Fricker. Having completed his story, the reporter then filed it—by attaching five pages of letter-sized paper to Ariel, who was back home within one and three quarter hours.

The wreck of the Wairarapa had drawn attention to the need for communication services between the island and the mainland, while the story of how the reporter met his deadline offered a potential solution. Fricker’s Great Barrier Pigeongram Agency was formally established the following year and Ariel and her feathered colleagues began their weekly travels over the island by steamer, in order to wing it straight back again. Within a few months fricker faced competition from pigeon buff J.E. Parkin, who set himself up under the similarly named Original Great Barrier Pigeon-gram service. according to an article in Pacific Way magazine, “Even the pigeons were confused, sometimes following the wrong birds to the wronglofts with the wrong messages.”

The Service and the Agency locked competitive horns many times; over the design of the flimsies—the rice paper pages on which messages were sent—over a price-war, over each other’s stamp designs. Parkin’s company (then managed by Mr S. H. Howie) was the first to print a run of stamps in 1898. These were the first airmail stamps printed in New Zealand, possibly the world. Fricker countered with a run of triangular-shaped stamps, and later, with a stamp specifically designed for the Auckland to Great Barrier service (as distinct from the Great Barrier to Auckland service). Parkin-Howie’s Service came back again, this time with stamps designed for a service from Auckland to the copper mines on Marotiri Island in the Hen and Chickens Group.

And so the pigeons began travelling around the Gulf, transporting mining claims, election results, shopping lists, accommodation bookings, key news events such as the death of Queen Victoria, the occasional urgent request for medical attention. It all came to an end when the first telegraph cable was laid between the island and the mainland in 1908. Only a small proportion of the stamps were ever flown; many were ruined by poor storage and a good number snapped up by eager philatelists. According to John Mowbray of stamp dealers Mowbray Collectables, the stamps can go under the hammer from upward of $100, although the Marotiri Island stamps, the rarest of the eight designs, can fetch $2000­ $3000. If the stamp happens to be on its original flimsy, the price jumps substantially. What would have cost little more than a shilling a century ago could fetch up to $20,000.