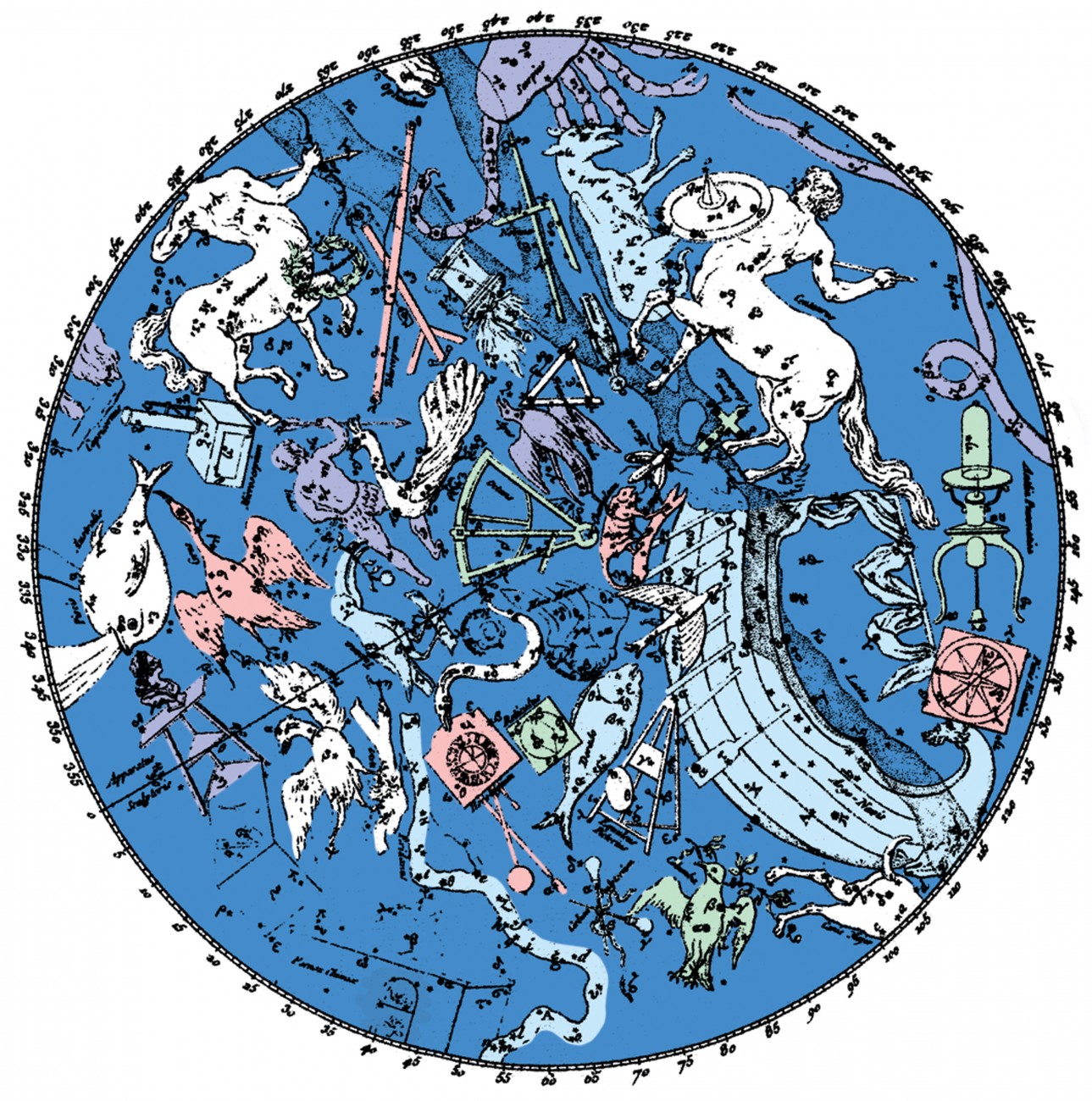 In the early 16th century, European know­ledge of the southern skies was largely anecdotal, depending as it did on reports of first Portuguese, and then Dutch explorers. In 1603, Johann Bayer published his famous Uranometria omnium asterismorvum, the first stellar atlas covering both northern and southern hemispheres. It was also the first to use Greek letters to identify the stars in each constellation, and although his charts have long been superseded the Bayer letters are a permanent feature of stellar nomenclature.

Bayer created 12 new constellations in the south to give structure to the hitherto unmapped skies. All of them, bar Triangulum Australe, are named after southern life forms, such as Tucana (the toucan), Volans (the flying fish) and Chamaeleontis (the chameleon). Because Bayer had to rely on the descrip­tions of navigators, such as Frederick Houtmann, in between the figures of these new constellations lay large areas with only faint stars not “formed” into named groups. Such gaps were also a feature of the northern skies, but because the figures of the constellations there were more tightly integrated with one another, the areas of unformed stars made up a smaller proportion of the sky than in the south.

Not until 1677, when the young Edmund Halley, bent on establishing a reputation, if not fame, spent a year on St Helena, did an astrono­mer survey the virgin skies beyond Europe’s southern horizon. Halley planned to observe and catalogue the stars about the south celestial pole, which are not decently visible until observed from 10-15° south of the equator. In the event he was largely defeated by the generally cloudy weather—later also to displease the exiled Napoleon Bonaparte. However, in his Catalogues Stellarum Australium (1679) Halley recorded the locations of 341 “new” stars, and this stellar catalogue had the further distinction of being the first based on the results of observations with a telescope.

Seventy-four years after Halley’s expedition, in 1751, Nicolas-Louis de Lacaille, an expert mathematician and geographer as well as a dedicated astronomical observer, arrived at the Cape of Good Hope, where he spent just over two years making observations from the slopes of Table Moun­tain. He found a host of anonymous stars, and also discovered that south of Ptolemy’s constellations, and among those formed by Bayer, were unmanageably large unformed areas. These he structured by creating 14 new constellations, of which 13 are immortalised in the modern canon. The 14th, Malus, the mast of the ship Argo, became amalgamated with his Pyxis Nautica, the mariner’s compass, and so disappeared.

Using a very small, 12 mm refractor fitted with an ingenious rhomboidal diaphragm (similar to the diaphragms found in camera lenses), Lacaille measured the right ascension and declina­tion of some 10,000 stars. He also observed and described 42 nebulous objects and star clusters. Before his early death in 1762, probably from overwork, he was able to publish only the reduced positions of some 400 stars although with much greater precision than Halley had achieved and his chart. The raw observational data on the remainder was published posthumously, the work of reducing it not being completed until 1847.

The fact that some of the northern constellations present us with patterns that bear a resemblance to their namesakes, e.g. Scorpius (the scorpion), Corona Borealis (the northern crown) and Canis Major (the greater dog), leads us to expect the southern constellations to follow suit, but to the disappointment of the tyro sky-sweeper they do not. In truth, many of the classical constellations form patterns with no inherent similarity to the objects after which they are named, but to be fazed by this is to fail to grasp that the function of the constellations is not to portray but to remind and to structure.

The 48 constellations of Ptolemy pattern the stars according to a set of relationships and events among gods and heroes. Recognising one prompts recollection of others. As Kipling observed, being able to name, describe and relate is the foundation of recall. Herein lay Kim’s difficulty when playing Lurgan Sahib’s game: the jewels he saw briefly and then had to report were strange to him, hard to describe and so difficult to recall.

Finding one’s way in the night sky presents the same problem, in this case remembering the position and relationships of striking and not so striking groups of stars. Indeed, naming something seems to be an essential preliminary to thinking about it, as opposed to merely pointing it out or reacting to it.

When Lacaille came to bring order to the uncom­fortably generous gaps left by Bayer, he drew on the icons of his age, that of the Enlightenment. For his new constellations he chose names such as Antlia (the air pump), Octans (the octant), Microscopum and Telescopum. With the exception of Circinus (the compasses) and Reticulum (the rhomboidal net in memory of Lacaille’s diaphragm), one seeks in vain for suggestive resem­blances between the stellar patterns and Lacaille’s names.

Of course, the constella­tions and their names are really just a mnemonic device for remembering the arrangement of the stars. The same naming process continues today. When astronomers chant, “Oh! Be A Fine Girl, Kiss Me,” they are not voicing a serious proposal but a mnemonic for the sequence of stellar spectral types, 0 being the high-temperature blue stars and M the cool red ones, with B, A, F, G and K being intermediate in temperature.

Ordering something as straightforward as a temperature range is one thing, but finding a simple way of ordering the jigsaw-like pattern of the irregularly shaped constel­lations escapes us, not least because of the change in appearance of the celestial sphere with the season and time of night. We are forced to memorise a two-dimensional array of proper names, which in the south have no mytho­logical or other conceptual armature. Even that most likely and ancient candi­date, the procession around the zodiac, seems to have escaped encapsula­tion in a simple mne­monic, perhaps because it is nowadays astrophysically of no significance.

Notwithstanding the increasing sophistication of astronomical methodol­ogy, the constellation names are still used by all but the most pointy-headed to refer to areas of the sky such as the general location of a comet or the planet, and the majority of stars visible with the naked eye are still known by their constellation and Bayer or Lacaille letter, or Flamsteed number.

While such luminaries as Betelgeuse and Antares retain their monikers, their fainter brethren have slipped into anonymity. Thus Dschubba, a name now used only by astro­nomical antiquarians, is Delta Scorpii, rather than HD143275 or SAO 184014, its designations in the Henry Draper Catalogue and the Smithsonian Astrophysical Observatory Star Catalogue.

In the early 1900s, as more and fainter stars became of astronomical interest, the ill-defined boundaries of the constel­lations—freehand curves among the unformed stars—became a source of confusion. Indeed, several bright stars were shared between two constella­tions. In 1930, therefore, the International Astro­nomical Union redefined the boundaries of the 88 accepted constellations along the lines of right ascension and declination, so every star could be placed unequivocally in a constellation.

But if all is now positionally tight and tidy, this detracts not at all from the riotous splendour of the night sky, which can keep one out of bed until dawn dims the show.