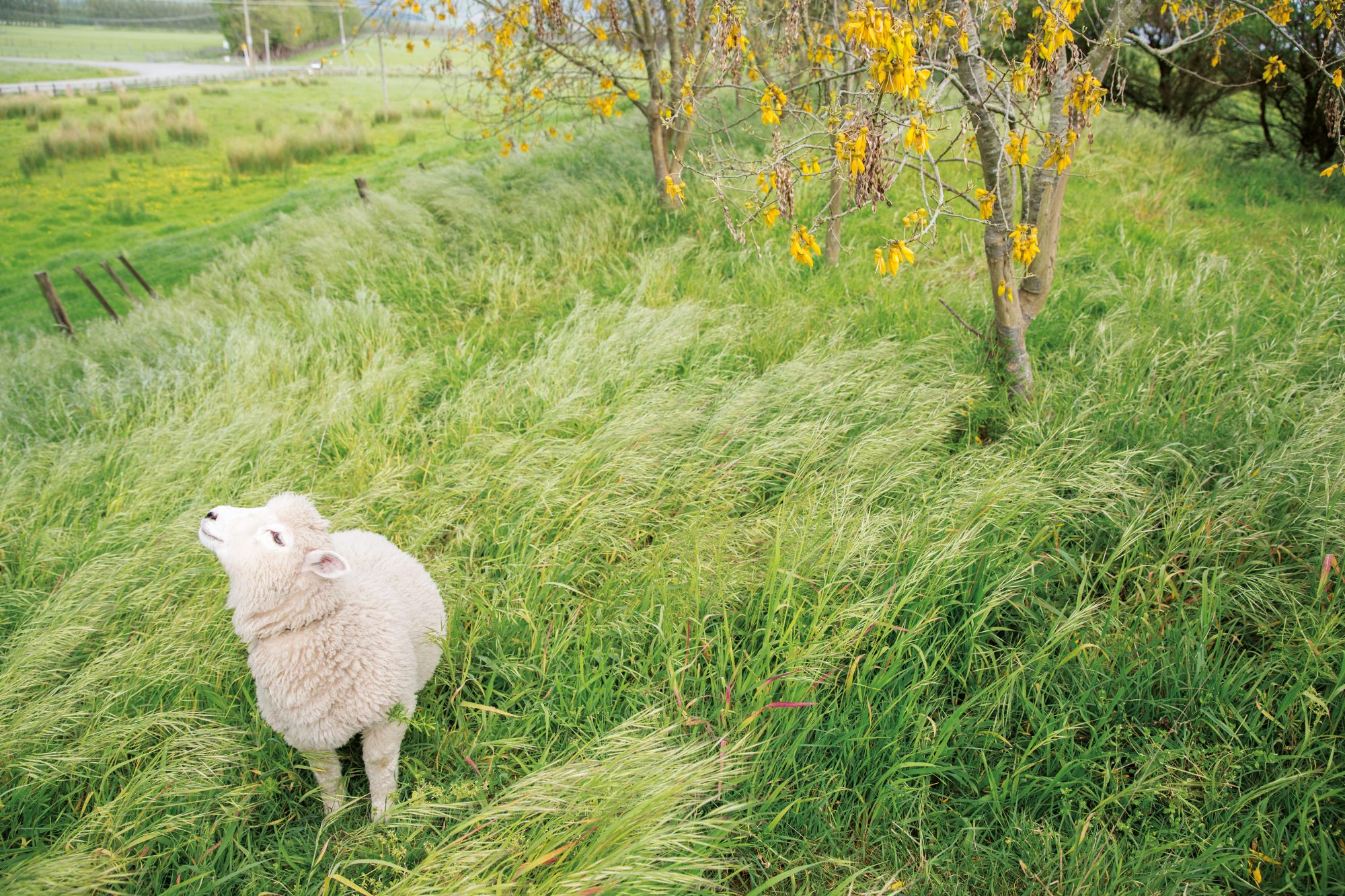 A southerly front has closed Wellington Airport and brought snow to the Rimutaka Ranges. South of Featherston, the storm cuts power to the Ferguson’s house. Margot (11), Annie (9) and Ruby (6) convince their parents it would be better to keep their pet lambs in the kitchen for the night.

The girls tend the newborns by candlelight, wrapping each in hand-decorated felt covers, feeding them, choosing names. Annie’s lamb tugs at the bottle, so perhaps Greedy or Hungry? Margot settles quickly on Kahu, after a Māori chief she read about. Ruby’s will be Kate, after her favourite cousin. And Gus (5), who doesn’t yet have a lamb, ponders the possibilities—Chocolate, Christof, or Sven? (His lamb will eventually go by all three.)

The Fergusons are beekeepers, so adopted the lambs from farming friends to enter into the Kahutara School pet day, an event echoed in rural communities throughout New Zealand. For the young competitors, pet day is among the first formative experiences of animal husbandry, establishing values and skills necessary for future farming careers. For others, like me, it is a treasured aspect of our rural heritage.

I took calves to pet day at the same primary school nearly three decades ago. At the end of the competition season, Mum would line us up for a photograph—me with my two sisters and any neighbours who’d raised calves on our farm. Children and animals adorned with felt ribbons and satin rosettes. Occasionally a trophy or two.

What that final photograph didn’t capture, however, was the hard work that went into the season. Last year, I returned to Kahutara to photograph the local pet days with the Fergusons and four other families celebrating an important rural tradition in south Wairarapa.

Pet day shows occur at the end of the busy spring season, making them a welcome opportunity for families to down tools, support children and grandchildren and socialise with friends.

Daily routines for raising lambs and calves vary depending on the animal, the child and the family. Dairy farmers Karen Fitzgerald and Lance Williams, her partner, are often up at 5am and don’t finish their day until after 6.30pm during calving. Helping their girls Holly (4) and Zara (6) with their calves adds more effort, but echoes the patterns of their stud farm—this season, Fitzgerald and Williams exhibited their own pedigree cattle at the annual Wairarapa Agricultural and Pastoral Show, and the New Zealand Dairy Event in Feilding.

“If you have a good animal you want to put it up against the others to see how they do,” says Fitzgerald. “It’s also the friendships we build with other farmers that keep us going back to the shows each year. We’re all cow-mad, and speak the same lingo.”

Her mother’s passion for showing cattle has clearly worn off on Zara. This year, she continued the family tradition when her calf Demi won the Champion Dairy Calf shield at the Wairarapa A&P show as well as the Renall Memorial Challenge Cup for rearing and handling. Both trophies have her uncle’s name, Kerry Fitzgerald, engraved on them for his efforts in 1978.

While the awards give competitors something to strive for, the day isn’t all about winning. “Raising calves teaches the kids values,” says Fitzgerald. “It’s also very special to see the look on their faces when the judge picks them out for a place.”

Show day is a frantic attempt to ensure the animals are looking their best. Calves are shampooed and hosed, ears cleaned and hooves scrubbed. For lambs, wool has to be kept in its natural condition: no brushing or cleaning other than picking out debris and trimming dags.

To be eligible to enter, all lambs and calves must be born on or after July 1, allowing early starters roughly three months to ready their pet for the first competition. Months of training culminate in each animal being judged in three different categories: ring-craft (how well your pet leads in the ring); care and attention (how well groomed the animal is); and type (the animal’s physical characteristics that give it the potential to be a good producer).

“The key is to connect with your lamb,” says Ben Oakly (12). “I always spend time with my lambs after school just playing with them so that they get used to me and my voice.”

Ben has had a good track record raising prize-winning lambs, but it’s also been an introduction to the mixed fortunes of farming. One season, a promising young lamb died before show day; other years he could pocket the income made when the lamb was sold at the end of the season. “I want them to know that if they work hard then they’ll reap the reward,” says his mother, Linda Smith. “If you want something, whether it is an award or the money, you have to show initiative and work for it yourself.”

This year’s lamb, Kelly, will be Ben’s last—he’ll soon be off to secondary school, leaving others in his community to continue the tradition, as they have at the school for more than 85 years.

There are practical farming skills, and less-tangible outcomes such as commitment, confidence and learning to take initiative. Perhaps the most meaningful outcome is fostering a connection to the land and farming seasons, forged year upon year, generation upon generation.

“I cherish the tradition of pet days,” says Karen Ferguson. “I really enjoyed having my own lamb as a child and want to give the kids the opportunity to be involved and make their own memories.”

Looking for the good life