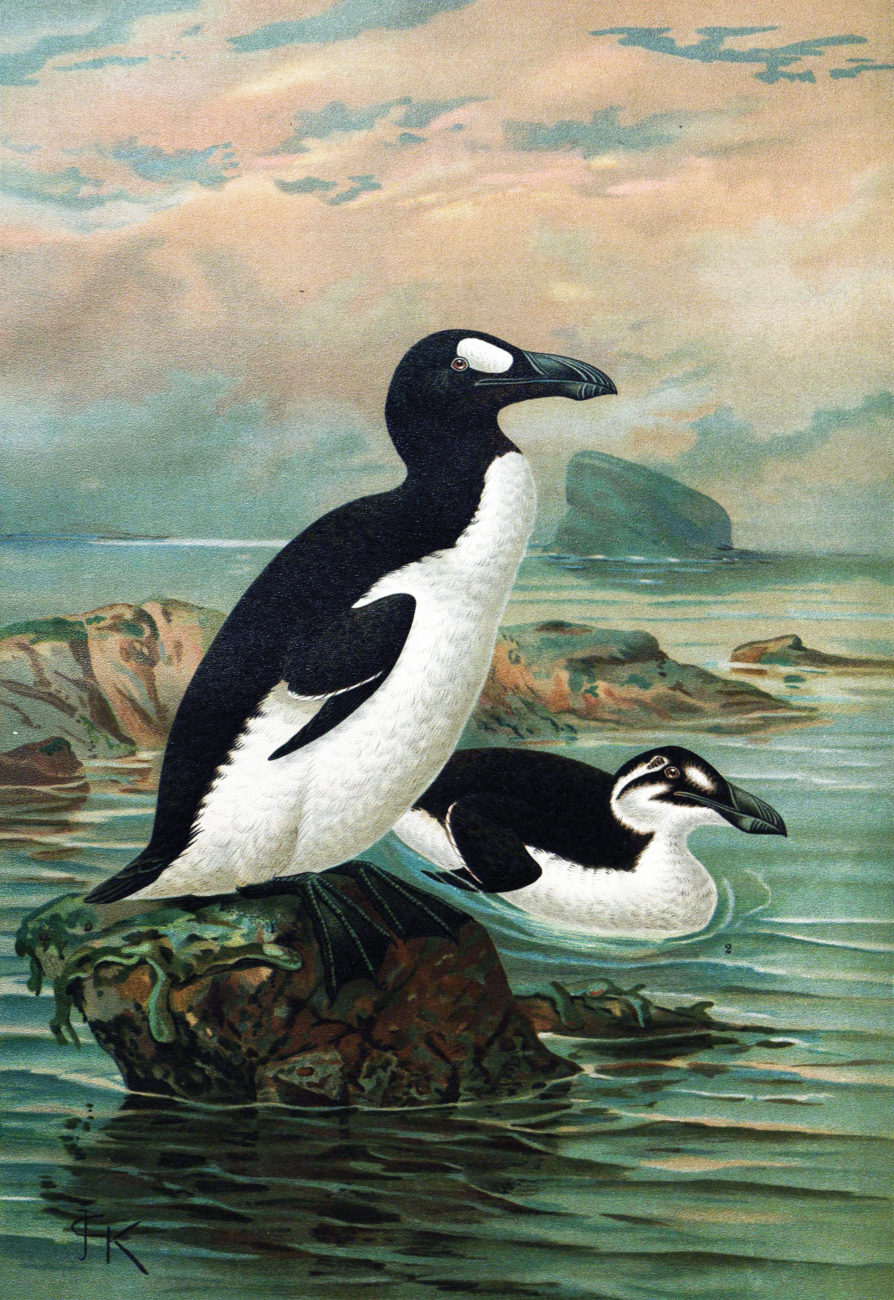 On Scotland’s remote St Kilda island in the summer of 1840, a group of fishermen found a strange seabird sleeping on a ledge. It was black-and-white, flightless, and enormous. The men took it home to their village and tied it up in a stone hut.

For three days the bird complained and tried to bite anyone that came near. Then a wild storm arose. Fearful the bird was a witch, and had sent the tempest to punish them for capturing it, the superstitious villagers stoned it to death. It took an hour to die.

In reality, the witch-bird was a great auk—the last one ever documented in the British Isles. Four years later, the last pair in existence was killed in Iceland by hunters looking for museum specimens.

The species—sometimes known as the penguin of the north—had ranged across the North Atlantic in the millions. What happened? Was the species in decline before intensive harvesting started in the 1500s—or was human hunting alone enough to drive such a numerous species into oblivion?

To find out, genetic researcher Jessica Thomas from the University of Swansea analysed the mitochondrial DNA of 41 long-dead great auks. The data showed the species had enjoyed high genetic diversity and a constant population size for thousands of years, and that great auks from across the North Atlantic were able to meet and breed.

The researchers then simulated how much hunting would have been necessary to drive the great auk to extinction within 350 years, and found that an annual harvest of 210,000 birds and fewer than 26,000 eggs would have inevitably led to extinction.

Sailors’ journals and other historic reports suggest the actual number of birds killed for their meat, eggs, and feathers is likely to have been far higher. Then the museum trade finished them off.

“There are lot of very gruesome sailors’ records in terms of how they used to kill them,” says Thomas. “They would have these huge pits where they would corral the great auks into stone huts and then burn them with the oil from their dead relatives.”

The study highlights that “pretty much anything is susceptible to extinction”, says study co-author Michael Knapp from the University of Otago, where Thomas was based for some of her research.

“People went to the North Atlantic and it was full of great auks. Nobody would have thought there was any risk.”

Some of the great auk’s relatives—the puffin, the murre—are still hunted today, and should be more closely monitored, says Knapp. “Anything we exploit in large numbers we need to be very careful about, even if we think there’s a lot of them.”