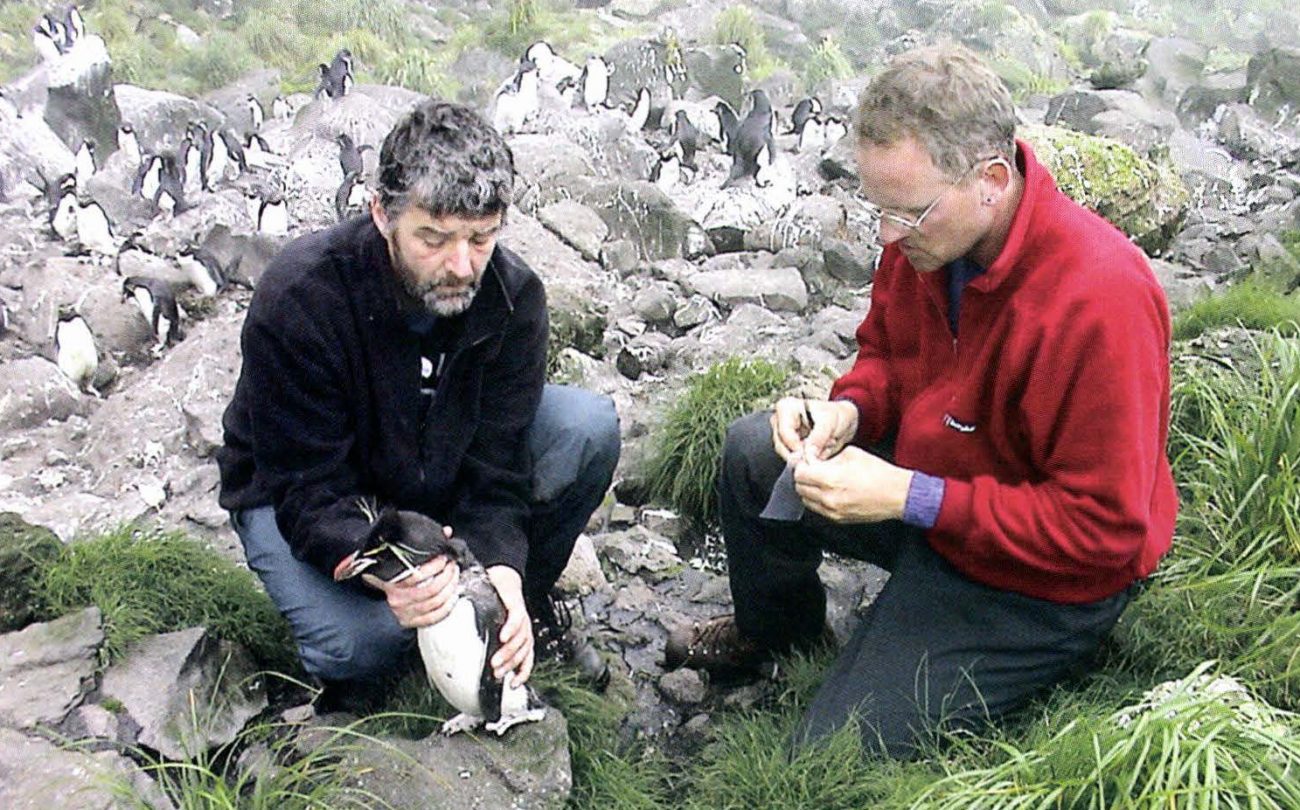 During the 1980s and 1990s, many of the world’s breeding populations of rockhopper penguin—including those on Antipodes and Campbell Islands and in the Auckland Islands, in New Zealand’s subantarctic—went into severe decline. Recent work on Campbell and Antipodes indicates that the downward trend is continuing, with worrying implications for the long-term viability of the species in these areas.

Rockhoppers, the smallest and most widely distributed of the world’s six species of crested penguin, breed on islands in the South Atlantic, Indian and Pacific Oceans. Except for populations on islands off the coast of Chile and Argentina, which have remained more or less stable, all have shown varying degrees of decline.

The fall in the number of rockhoppers breeding on Campbell Island was first described and quantified by biologists Duncan Cunningham and Phil Moors in 1994, following field work completed during 1984-86, and reported in detail in New Zealand Geographic, Issue 22.

Cunningham and Moors found that over a period of about 45 years, from the early 1940s to the mid-1980s, the rockhopper population on Campbell Island fell by 94 per cent, from over 1.6 million to 103,100 breeding birds.

In December 2000, several Campbell Island rockhopper colonies were photographed. The prints, when compared with photographs of the same locations taken in the 1990s, showed a further reduction in numbers.

On present form, the long-term outlook for this characterful species in New Zealand does not look too encouraging.

The reasons for this catastrophic population drop remain unclear. Cunningham and Moors suggested that changing sea temperatures were involved. They noted that the decline in rockhopper numbers coincided with temperature increases recorded in Campbell Island’s Perseverance Harbour, and hypothesised that warmer seas resulted in fewer krill, the penguins’ preferred food. Faced with a paucity of krill, Cunningham and Moors argued, rockhopper penguins had been forced to switch to prey of lower quality, primarily small fish.

At the time, it was impossible to test this hypothesis because there were no quantitative dietary data for rockhopper penguins from the period when the population was much larger. However, researchers at the National Institute of Water and Atmospheric Research (NIWA) have tackled this problem by employing stable-isotope techniques, applying these to a time series of feather samples collected over the past 120 years and held in museums around the world. This innovative approach has enabled them to determine long-term trends in the diet of rockhopper penguins.

Stable-isotope analysis measures the ratio of heavy to light isotopes of common elements such as carbon and nitrogen. The nitrogen stable-isotope ratio provides information about how high up the food chain a penguin has been feeding: the higher the position on the food chain, the greater the ratio of nitrogen-15 to nitrogen-14. The carbon stable-isotope ratio provides information about the productivity of the marine ecosystem in which a penguin has been feeding: lower ratios of carbon-13 to carbon-12 are indicative of less productive systems.

Analysis of the rockhopper feathers has shown that the nitrogen stable-isotope signature has not varied significantly since the 1880s, suggesting that New Zealand rockhopper penguins have not changed their diet during the past 120 years. By contrast, the carbon stable-isotope signature has declined significantly over the same period, indicating that the productivity of the marine ecosystem supporting the penguins has declined. The carbon isotope values began to drop during the late 1940s, coinciding with the onset of the crash in penguin numbers.

The overall picture seems to be that rockhopper penguins have maintained their diet but have been unable to find enough food to keep up their numbers because the marine ecosystem has been less productive in recent decades.

Why the subantarctic marine ecosystem is now less productive than in the first half of the 20th century is a difficult question to answer, but Cunningham and Moors were probably correct in identifying changing sea temperatures as a factor.

Ongoing work at NIWA aims to construct a temperature profile for subantarctic water dating back to before the decline in penguin numbers using another stable-isotope ratio, this time involving oxygen. Oxygen stable-isotope ratios are to be determined from the shell carbonate of brachiopods—a group of marine organisms similar to bivalve molluscs—captured at depths of around 100 m.

The oxygen isotope signature is a proxy for sea temperature. This work will highlight whether there was a change in sea temperature around the time penguin numbers began to drop.

NIWA researchers are now addressing these issues, and searching for evidence that rockhopper penguins have to work hard to capture food.

During the 2002-03 breeding season, adult birds were equipped with time-depth recorders to monitor diving behaviour. These tiny data loggers, weighing just 30 g apiece, were taped to the backs of foraging birds and removed after a single feeding trip so the information they had recorded could be downloaded.

Preliminary results indicate that rockhopper penguins regularly dive to depths greater than 80 m, with 115 m the deepest dive recorded. Dives can last up to three minutes, and during a period of active feeding a penguin can spend as much as 80 per cent of its time below the sea surface.

When fully analysed, these data will be compared with similar data sets for rockhoppers at other sites, such as the Crozet Islands, to see whether New Zealand rockhoppers are working especially hard—which would support the proposition that their food is now relatively scarce.

As well as investigating penguin diving behaviour, researchers fitted penguins breeding on Antipodes Island with satellite telemetry devices to determine where they went to find food for their chicks. The results showed that the birds mostly swam 25-50 km offshore in water about 1500 m deep. The birds did not feed near the seabed, of course, but presumably dived to about 80-115 m. The duration of these trips was usually less than a day, each penguin covering some 50-100 km in that time.

Once their chicks were growing up, the adults fed even farther from the breeding colony, up to 110 km offshore, and remained at sea for 3-4 days.

Why New Zealand rockhopper penguins have fallen in number so dramatically remains unanswered, but research in progress aims to shed light on the processes underpinning this alarming trend.