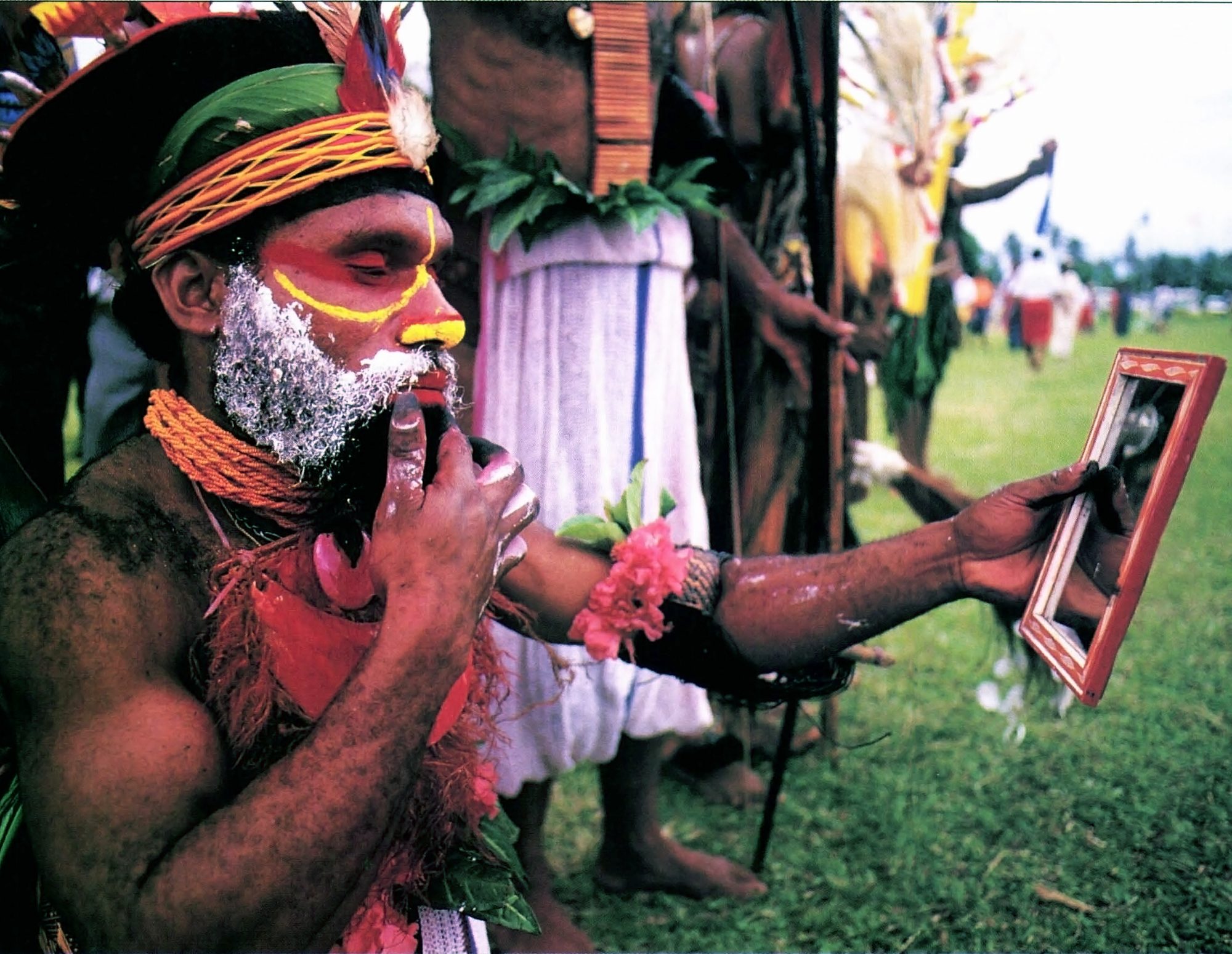 We have much to unlearn before  we can revive the ancient ways,” said Johnny Sablan of Guam, watching a group of young women put on their coconut-leaf costumes. “The other islands can help us with that.” Johnny led Guam’s performing arts delegation of dancers and singers at the Seventh Pacific Festival of Arts, which was held on thelislands of Upolu and Savaii, Western Samoa, in September 1996

The festival brought together More than 2000 delegates from 27 Pacific nations, plus another 2000 foreign visitors, for two weeks of celebrating the artistic genius and cultural diversity of half the globe’s peoples. The theme was tala measina – a Samoan expression that literally means “opening out mats.” The phrase is equally a metaphor that signifies unveiling the best in one’s cultural iteritage, and this is what the Pacific Festival of Arts is all about.

Held, like the Olympic Games, every four year (the next will be at Noumea, New Caledonia, in the year 2000), the festival has become one of the largest regular gatherings of artistic performance and display in the world, and is predicted to flower long into the next millennium.

The coming together of Pacific peoples to enjoy performances of music aid dance is not a new phenom­enon.  In the 1880s, important occasions in Hawaii were frequently marked by extended bula celebrations. In this century, numerous Maori arts festivals have honoured the cultural wealth of both pre- and post-European Aotearoa. And in Samoa ifself, beginning in the German colonial period, local artistic genius has often been hailed in galas of dance, song and costume, and exhibitions of carving.

But today’s  festival is a far cry from these early precursors. It unites the distant corners of the Pacific—from Guam to Easter Island, from Hawaii to New Zealand, and across to Australia and Papua New Guinea —stressing the shared origins of the Pacific peoples and their arts, while at the same time paying homage to local uniquenesses. Each delegation comes to see and be seen, and to make its contribution to a colourful dialogue in space and time.

The festival embraces the whole panoply of Pacific artistic creation. While the highlight of each event is undoubtedly the stunning performances of music and, dance, these offerings’ are increasingly enriched by cultural
arts: carving, cooking, weaving, tattooing and traditional healing. At the past three festivals (though not at the 1996 event) there has even been a firewalking demonstration given by the Tahitian delegation.

The 1992 festival, held in Rarotonga, celebrated the vaka, the traditional  sailing canoe, and paid special attention to the arts of boat-building and navigation. At this year’s event, contemporary art, body art and cinema­tography were included, and a gallery of island arts was opened in Apia for the festival’s 14-day duration.

The Pacific festival of Arts is the premier showcase for the traditional and contemporary arts of the greater Pacific area. To be selected as part  high honour for performing artists. Although it is not a competi­tive event (there are no prizes, and performers do not seek to “outdance” each – other), the festival has engendered a new sense of cultural pride among islanders young and old. This pride has taken Pacific art, especially music and dance, to a high level of artistic presentation.

The festival has also created a new sense of “Pacificness” among island communities: an awareness that although a group of people may live their lives on a tiny atoll, far from island neighbours (let alone the centres of world population and power), they are nonetheless part of a much greater Pacificwide culture.

Recognition of a panPacific identity can be a strong motivating force for individual communities to revive and cherish their own traditional forms of cultural exptession.

Guam is a case in point, says Johnny Sablan. “We are one of the most modern islands in the Pacific Our people are educated and . We see this festival as a chance for our dancers, musicians and artists to be part of a more natural world that still exists on other islands.”

A realisation of what has been missing in the more Westernised island cultures is one of the reasons young islanders train long and hard for each festival. Ancient music and chants, costumes, body art, even (for many) their ancestral language—these are things young people want to rediscover. They want to know what their ancestors knew

For other islanders, the festival is not solely .a showcase for the traditions of the past, but also a way of celebrating what is popular and enjoyable in the present. To this end, the last two festivals have featured contemporary island pop music and contemporary visual arts.

Whether reviving the ways of the ancients or experimenting with the rhythms of today, the Pacific Festival of Arts demonstrates the diversity and vitality that is the Pacific.

The flavour of the Pacific

Heroes in a (Pacific) half-shell