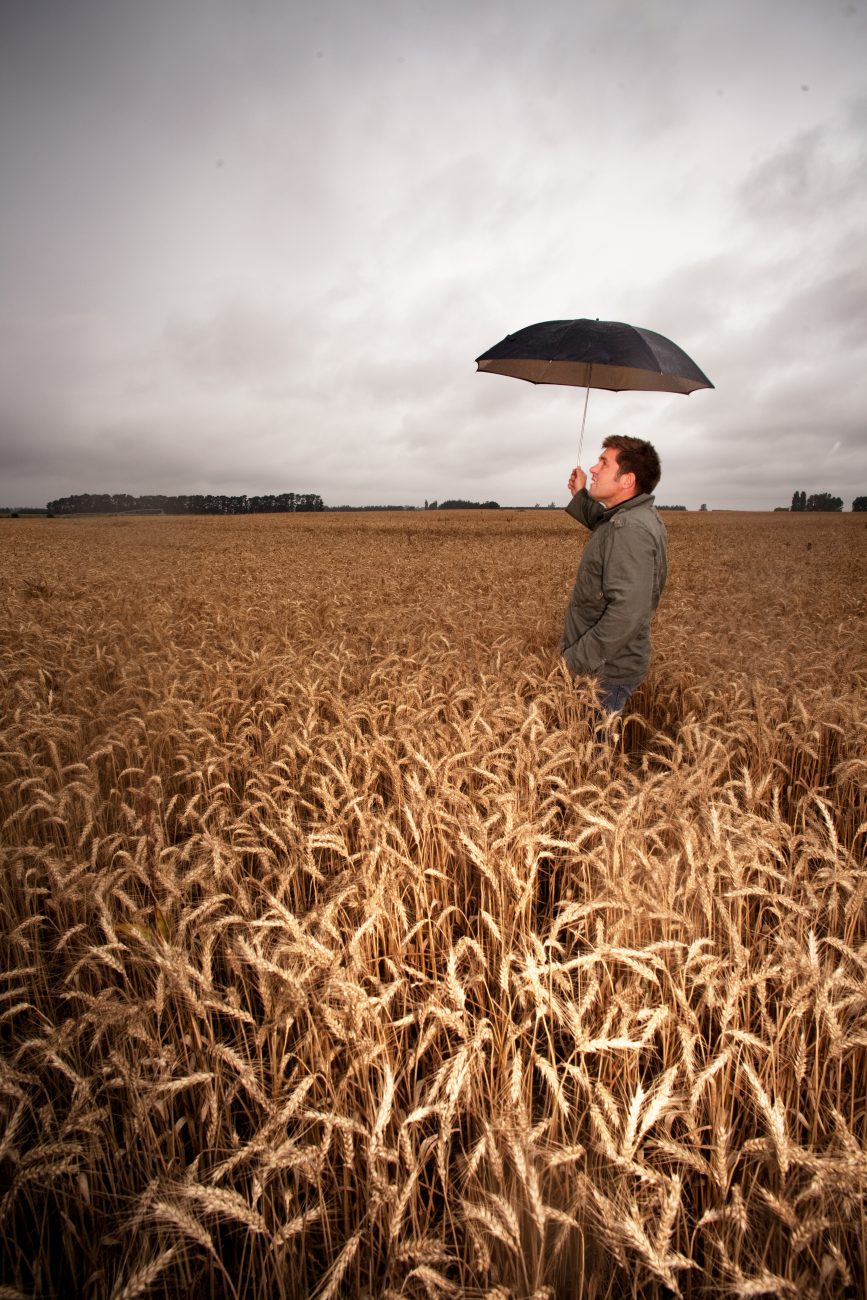 Unseasonably wet weather hampered the summer wheat harvest in Canterbury this year, and the production of the New Zealand Geographic feature on the subject. For photographer Julian Apse it meant maintaining a phone list of some 30 farmers in the region, calling each of them every afternoon and waiting for any one of them to fire up the combine harvesters. He had a helicopter on standby for weeks.

“You have very little control in an editorial shoot,” says Apse, who earns his bread and butter shooting in a commercial environment with controlled lighting, consenting models and a small army of assistants.

At one point, desperate to get the harvesting shot in the can, Apse offered a farmer his entire editorial fee just to start heading the wheat. “But he wouldn’t budge,” says Apse. “As long as the wheat was wet it was worth more to him in the field than rotting in a barn.”

The night before the magazine was to go to print, the skies cleared, the humidity dropped and the enormous Claas har­vesters started rolling. Apse leapt into a Hughes 500 with legendary backcountry and Antarctic pilot Laurie Prouting, and they found their mark over Geraldine as a southerly front rolled in. Apse aimed and fired, without a moment to spare. The frame was processed, sent to New Zealand Geographic electronically and printed the very next day. It appears on page 80—cup the page close to your ear and you may still be able to hear the whirr of the turbine, the thrum of the har­vester and the scything of Canterbury wheat.

Poor weather also kept Dave Hansford on standby for weeks, waiting for clear air to photograph helicopter pine-control work in the Kawekas—images which appear in the feature on page 46. But despite the hazardous cocktail of chainsaws and choppers, the only casualty was his car, which blew its engine returning home from the assignment.

However, the dubious honour of most-affected-by-the-­weather goes to Shaun Quincey, recipient of a New Zealand Geographic Trust grant, who was beset by an untimely series of gales while rowing across the Tasman—unfortunately from the same direction in which he was trying to row.

Even as this magazine goes to press we have received a message from Quincey in mid-Tasman “Gnarly storm going on, probably the biggest so far but it’s taking me east. No rowing today.” Long after the other contributors have finished their work, even received copies of this magazine, Quincey will still be there, weather beaten but not broken, and still racing the clock.