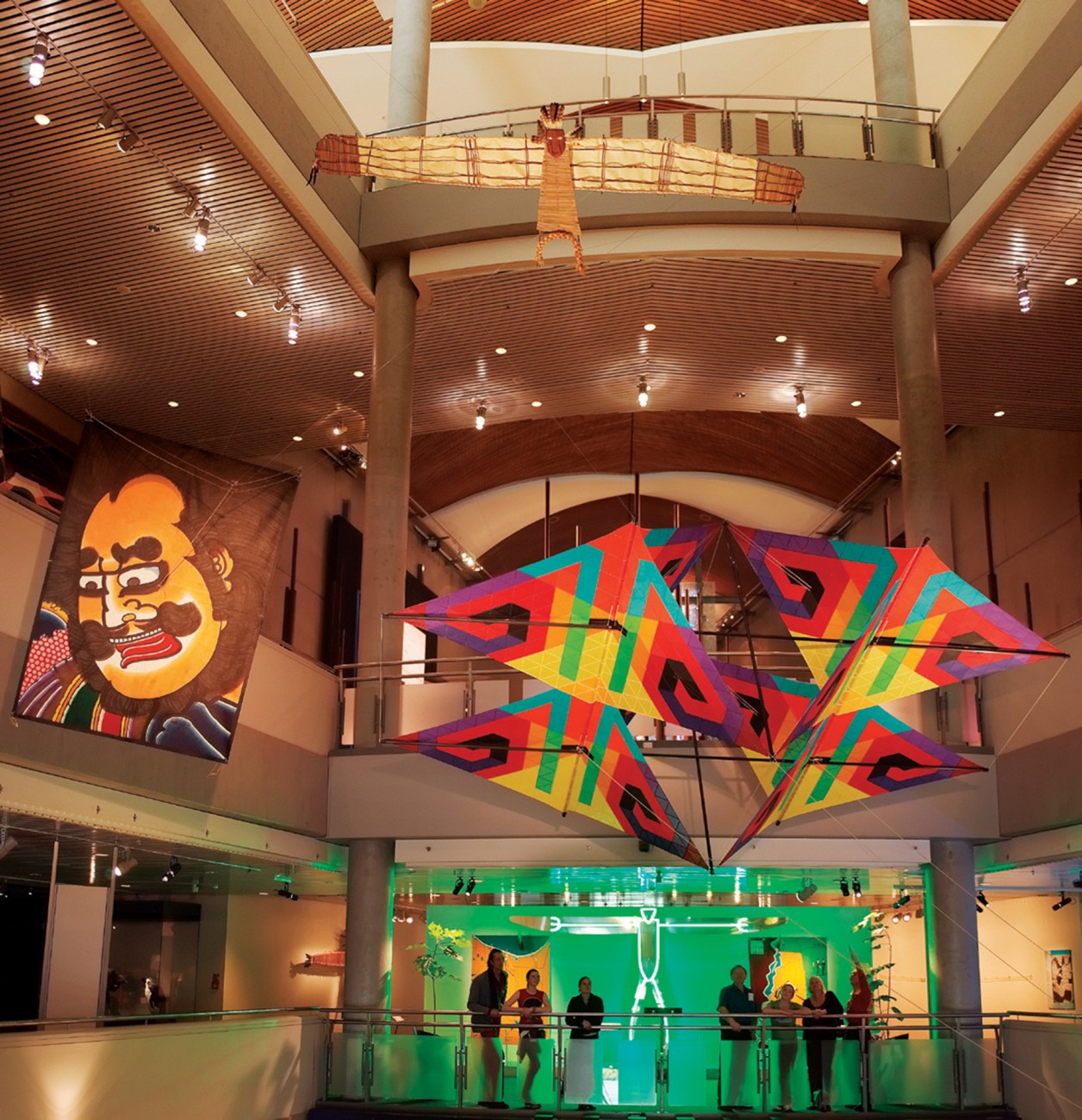 For millions of years, creatures have borne themselves aloft, but who among humans first fashioned a wing? Eat your hearts out, Wilbur and Orville. Weep, Leonardo. The Aborigines had it sussed 10,000 years ago.

Welcome to “Wings: Nature’s flying machines / Hua rere a re taiao,” on show at Te Papa, Wellington, until April 2004. With an emphasis on natural history, while embracing aspects of aviation, human history, and Maori culture and art, this instructive and eye-opening exhibition explains the mysteries of flight—how it works, how it has evolved and how it has exercised people’s imagination and ingenuity down the ages.

Albatrosses and other gliding birds, such as petrels, have long, narrow wings, tapered to minimise drag. Pelicans’ wings are “slotted,” the feathers at the end splayed like fingers, the better to gain purchase on the air and make a steep take-off to escape danger and gain altitude. Swifts can both soar and propel themselves at great speed by flapping. They are perhaps the ultimate feathered aces. On leaving the nest, they may fly for as long as three years non-stop, even “sleeping” and mating in mid-air.

The tomtit can execute almost instant U-turns on its short, round wings—a great help when hunting insects, among whose ranks are such masters of flight they are known, simply, as flies.

There are thought to be over a million insect species, and almost all have wings—usually two pairs. On flies, the back wings have evolved into paddle-shaped balancing organs, called halteres. It is these that enable flies to perform all manner of aerobatic stunts, including changing course instantaneously and taking off backwards.

Beetles, by contrast, have undergone modification of the front wings, such that these have become hard protective cases for the back wings, albeit at the cost of more laboured flight. Dragonflies and damselflies, with their long diaphanous wings and powerful flight muscles, are the arch predators among flying insects—large, fast and manoeuvrable.

Wings, however, are not solely for flying: they can speak pretty loudly, too. Male birdwing butterflies flaunt wings of dazzling colour to attract sexual partners. Crickets serenade potential mates and repel intruders by dragging a serrated ridge on the underside of a front wing across a special vein on the upper side of a back wing—that is, by chirping. Tui and kereru “sound” their wings to the same effect, the air rushing through gaps between the outer feathers during flight.

Flight, however, remains a wing’s principal purpose, and an airborne existence makes all manner of demands on the rest of the body, as a section on the evolution of flight illustrates.

Take a bird’s flapping muscles. They’re enormous, in some cases weighing as much as all the other muscles put together. Certain features of a bird’s skeleton are built to match. One is the pronounced keel on the sternum, or breastbone, to which the muscles used for the upstroke are anchored. Skeletal samples are laid out for comparison, including the sternums of takahe, weka and kiwi, all of which, being flightless, have only a vestigial keel or none at all.

Penguins, although their flippers are small compared to an air-going bird’s wings, can still “fly” at speed and have just as pronounced a keel, owing to the greater density of water than of air.

A number of displays illustrate how flying animals need highly tuned senses if they are to avoid obstacles, catch prey and navigate long distance. A bat’s acute hearing and use of echolocation is almost a byword for sensory steerage control. The compound eyes of insects, composed of thousands of separate lenses, allow their owners to see more quickly than other creatures. To understand this ability, imagine being able to distinguish each of the 24 frames projected every second during a film show. I peer through a pair of insect-eye goggles at a video demonstration of the mechanics of bird flight, hoping to enjoy the benefit of fast­sightedness, but see only countless tiny repeated images.

Homing pigeons and migrating birds use sun, moon and stars, as well as landmarks and the Earth’s magnetic fields, to find their way across vast distances. Migrating bar-tailed godwits undertake the longest non-stop flight of all: 11,000 km from their breeding grounds in Alaska and Siberia to New Zealand, a feat accomplished in little more than 100 hours. I can’t decide if jet aircraft and GPS are clever or clumsy by comparison.

How do animals become airborne in the first place? Visitors to the exhibition are invited to consider the possibility of wings evolving from gills, and to seek further clues in creatures that appear to be partway down the evolutionary flight path, such as stoneflies, sugar-gliders and flying fish.

The first fliers were insects, followed by reptiles (pterosaurs), birds and, finally, mammals (bats). Feathers are thought to have been a dinosaur adaptation—scales modified so as to provide warmth—and birds to have evolved from dinosaurs. Devotees of Jurassic Park will notice the partly feathered velociraptor among the reptilian precursors of birds.

People have probably dreamt of flying since the dawn of mankind. But what practical purpose did dreamers and inventors imagine it would serve? Did even the Wright brothers foresee the modern age of mass air transport? Sandy Bartle, Te Papa’s Curator of Birds and principal organiser of “Wings”, suspects not. “It’s more likely that the driving force for human flight was long-distance communication,” he tells me. A section on the use of wings by humans explores this idea.

It was once a common belief that birds were intermediaries between the earthly and heavenly realms, hence if men could fly they might gain the presence of the gods. As long as powered flight remained a fancy, however, the best that could be achieved was to hoist, or be hoisted on, a kite.

“Today we think of kite-flying principally as a form of recreation,” explains Sandy, “but in the past kites were of great symbolic significance as well as of practical use. They could be used for communing with gods, signalling to friends, spying on or threatening enemies, or staking a territorial claim.”

Maori were once kite-fliers, forming kites from tapa, having brought the aute tree, or paper mulberry, from their ancestral home to Aotearoa. Just a couple of small, early-twentieth century examples made of indigenous materials—raupo leaves, flax fibre, toetoe, harrier feathers, cutty grass—are on view, along with a contemporary birdman kite, or manu aute. Suspended in a well beside the exhibition area, with a wingspan of almost three metres, this is a scaled-down imitation of kites supposed to have been large enough to lift a man. Sadly, owing to the perishable nature of tapa, no examples of the real thing survive.

“Flying” beneath the manu aute, and beside a Japanese tsugaru—a flat paper kite with cypress frame, painted with a glaring warrior face—is a modern, jazzily coloured, nylon-and-fibreglass box kite. Invented by Australian Lawrence Hargraves in 1893, the multi-vaned box kite contributed to the Wrights’ understanding of wings. Their pioneering flight at Kitty Hawk, almost exactly a hundred years ago, is given wall space alongside a brief homage to Canterbury aero-visionary Richard Pearse.

From the beginning, aeroplanes have carried more letters than people, yet airmail long predates the invention of flying machines. The use of pigeons to carry messages dates back to ancient Egypt, and was still common military practice as recently as the Second World War. Illustrated with engravings, maps and old postcards, a couple of displays relate the history of these winged messengers of old. I am intrigued to learn that airmail stamps were first used in New Zealand—for pigeon post between Auckland and Great Barrier Island.

“Wings” covers a lot of ground and, by taking a cross-disciplinary approach and placing New Zealand material in a wider context, makes thought-provoking connections. Flit through in fifteen minutes or cruise for an hour or more. Either way your mind will get a lift.