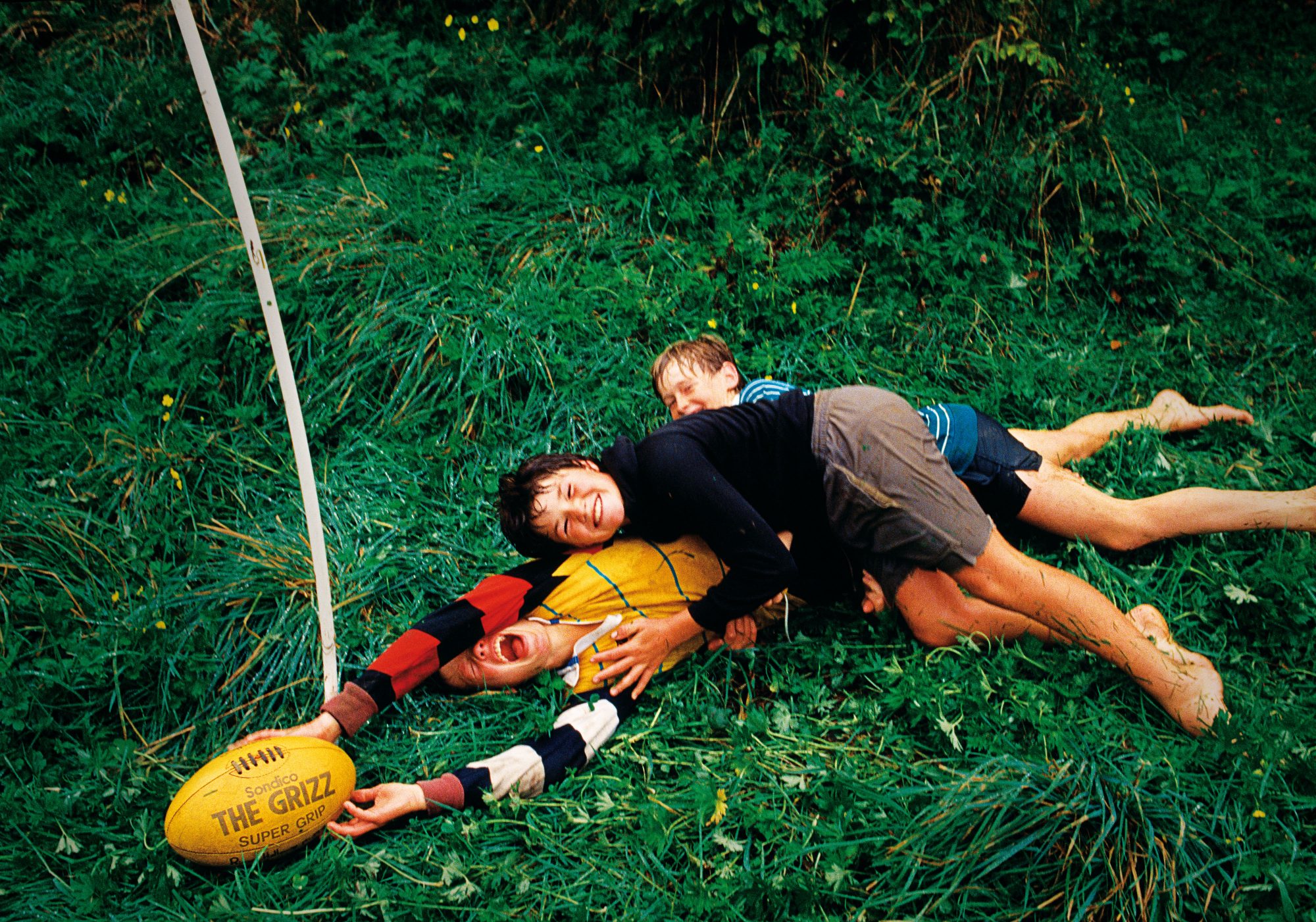 Down in my father’s study, beside the electric faux-coal fire, I’d heard the Beegee Chronicles a dozen times. “I’d never seen anyone do what he did,” Dad would tell me. “Never seen anything like it. The pace, the power—he had thighs like kauri stumps. And the sidestep. That sidestep! Wide as a barn door. No one could touch him. He was electrifying.”

Bryan ‘Beegee’ Williams was even better than Ron Jarden, Dad reckoned. Better than the best? That really was saying something. Hardly a test passed without me being reminded of his heroics on the high veldt during the All Blacks’ doomed tour to the republic in 1970. How he scored 14 tries in 13 games. Beegee was just 19.

These were formidable achievements and ensured his selection in Dad’s all-time All Black XV. This team—and my even better one—would duel as we slurped on mugs of Milo. While we’d sometimes struggle to talk to each other—a common condition among New Zealand fathers and sons—rugby was safe ground, the demilitarised zone where we engaged.

So who was the best, Dad? Bob Scott or the Boot, Don Clarke?

You know, he’d say, that’s a good question. And after lauding Clarke as the greatest match-winner the world had ever seen, he’d nominate Bob Scott—but then pick George Nepia, a player he’d never seen play, as the greatest All Black fullback of them all.

The greatest ever All Black, in fact. Read this, son, and you’ll understand, he’d say, reaching for I, George Nepia from the shelf. His rugby library also included Colin Meads, All Black, Fred Allen’s On Rugby and the bible, Men in Black. I read them all. And then I read them again.

There was other rugby memorabilia in the study. Dad’s old rugby photos. His playing career had been modest: he’d captained the Wellington College 2nd XV and later played in the centres for Trinity College, a team of meek Methodist ministers-in-training. My Dad, Brian James Malcouronne, was the captain, the goal-kicker and leading try-scorer for a team that didn’t win a game.

On another wall, a corkboard with yellowing newspaper cuttings of the first All Black game I went to, a 33–0 thrashing of Fiji in 1980. It was an underwhelming experience: the day was wet and windy, the chips cold and Eden Park seemed barely a quarter full. Still, I got Bill Osborne’s autograph—the player of the day, Dad said—and must’ve patted captain Graham Mourie’s back for half a minute.

But most games were watched in bed. Dad would wake me in the middle of the night—I’d be in my All Black pyjamas—and carry me through to watch tests from half a world away. Mum would have made a batch of Anzac biscuits, often still warm. Dad would make Milo (two spoons, not one). Made with milk, not water.

You never forget these games. Like the 1980 Centennial Test against Wales at Cardiff Arms Park. Fifty-five thousand singing Welshmen. We won 23–3, scored four tries to nil.

One started back in our 22. A lineout. I think it was our throw. Andy Haden taps it back to Dave Loveridge, who wriggles through the Welsh forwards—how did he do that?—and passes to Mourie. The captain runs for a few metres, passes back to Loveridge, who hiffs a wobbly pass out to Bill Osborne, who slips it to Bruce Robertson. The Prince of Centres draws their fullback, the great J.P.R. Williams, and puts Stu Wilson on track for a glorious try. Not quite! The Welsh winger Rob Ackerman comes out of nowhere and nails Wilson. But there, on Wilson’s shoulder, having motored from the lineout, is Hika Reid (how the hell did he get there?). Wilson passes. Reid scores. Hika the Hooker was another favourite of my father’s.

Two, three times a week I’d bike over to my grandparents’ house at 81 Golf Rd, New Lynn. It was an unremarkable 1950s bungalow that sat up near the road. My granddad, an Englishman, would brew tea and talk about his hero Charles Darwin, Jim Corbett the jungle writer, and the iniquitous Piggy Muldoon. Then he’d repair downstairs to his workshop to resole shoes, preserve fruit, or work on the homemade Catherine Wheels for Guy Fawkes that were as big as dinner plates and went for minutes on end.

My interest was in the sharply sloping quarter-acre behind his house. This was the field of dreams. I must’ve played 100 imaginary tests for the All Blacks here.

I always played towards the road, defending the Nochvins’ market garden on the adjacent section. It meant I was running up the slope—and risking the windows—but this was preferable to maiming old Babushka Nochvin’s cabbages.

I was a versatile player: I was a five-stone ‘Cowboy’ Shaw dishing out jungle justice to errant Australians up by the lemon tree. I was Dave Loveridge dive-passing into the hedge. I was Stu Wilson swerving through the three feijoa trees. Most of all, I was Steven Pokere, the undersized Southland five-eighth, whose picture was beside Elsa the Lion on my bedroom wall.

This was Boy’s Own stuff—I once scored 32 points against the Aussies in just 10 minutes—but I kept my feet on the ground. I’d return inside, guzzle Raro, get back to my books. I was a rugby nerd: I read and read and read until I became—theoretically anyway—the complete first-five.

On Rugby, a book co-authored by Fred ‘The Needle’ Allen and T.P. McLean, covered everything. It was a manifesto for total rugby—beautiful, balanced fifteen-man rugby. Rugby with brains. Rugby with soul.

The Needle had drawn his ideas from Charlie Saxton, the captain of the Kiwis, the New Zealand Army team that swept through Europe in the winter of 1945–6. At the heart of the Saxtonian philosophy were the ‘Three Ps’—Position, Possession and Pace.

These precepts had been passed to Saxton from earlier generations—from Cliff Porter’s 1924 Invincibles, from Dave Gallaher’s 1905 Originals, from Joe Warbrick’s Natives of 1888.

To play rugby—to play rugby well—you’ve got to be in the right place to receive the ball. Position. Now you’ve got to hold on to it—treasure it like a child. Possession. And when you see a gap, you must strike. Strike quickly. At Pace. As The Needle notes, “Rugby is a game which should be played at speed all the time.”

“Rugby’s a simple game,” insists The Needle. Really, all you’ve got to do is pass the ball backwards and run like a loon when you get it. Sure there are complexities, sure there are 174 pages of rules, obscure clauses and maddening interpretations to confound the uninitiated. In his 2010 paean to the All Blacks, French philosopher Bernard Henri-Lévy noted that rugby’s the only sport where you advance by retreating. Cryptically—Frenchly—he compared the game to Michael Jackson’s Moonwalk. Foolish talk.

For it is a simple game, and The Needle strips it back to its core. To play rugby well, he writes, you must conquer fear. So you must get fit, for a physically fit man becomes a confident man. He has courage. And if this is tempered by judgment and timing, he can tackle.

“Everything stems from concentration,” The Needle continues. “As concentration develops, so does confidence.”

There are Sun Tzu utterances—“Confidence is self-knowing, the ability to recognise (and conceal) one’s limitations, and coincidentally to know and extend one’s strengths”—and there are moments of Zen. “It is a wonderful feeling,” The Needle opines, “to be breaking clear, with supports well arrayed, and to know that by the exercising of your brains you have done the thing which has astonished the man who was supposed to be looking after you.”

On Rugby was written almost half a century ago and there are old-school flourishes, moments where McLean’s stentorian prose jars. The photos of the knock-kneed, baggy-shorted, Brylcreemed Needle remind us that it was a very different game then. But the basics remain the same; this is still the best primer around.

Looking at the book through adult eyes, it’s striking how often, how fulsomely, The Needle praises players from abroad. He marvels at the Irishmen Jackie Kyle and Michael Gibson (“the finest flyhalf I have ever seen”) and the brilliant French brothers André and Guy Boniface. He lauds the handling skills of Aussie Rules players.

Meanwhile, he lambastes the passing of New Zealanders who, he says, are the worst in the world. “Of all the passes, the best is the swing pass. New Zealanders have grown up from one generation to the next tending principally to use the broken-elbow style.” We still do.

We think we know the game better than anyone else. That we play the game as it should be played. We believe we are to rugby what Brazil is to soccer: we don’t kick our way to victory, but rather win—or lose—with style and grace. We run the ball. We go for tries.

Which forgets we were past masters of defensive rugby. Ten-man rugby. Up the guts, up the jumper. Where you don’t give the ball to the backs because they’ll mess it up. This was rugby devoid of risk, imagination and joie de vivre; this was rugby played with fear where the object was not to win, but to not lose. It’s a style that reached its apogee in 1959 when the All Blacks—or rather Don Clarke—beat the Lions 18–17, despite being outscored four tries to nil.

Since the strategy was a reaction to the All Blacks getting kicked off the park in South Africa in 1949, a tour Allen captained, he may have felt it was his duty to return New Zealand rugby to its roots. To its principles.

“After a preliminary warm-up,” he says, “I set them to a great deal of high speed running and passing and I keep yelling, ‘Spin! Spin! Spin!’

“I will say that that simple repetitive exercise of running and passing, spinning the ball from player to player, has been the basis of such success as I have had as a coach.” Keep your eye on the ball.

The basics. “That’s the ultimate aim—speed, speed, speed. You can answer everything else in rugby, everything that man can devise. But you can’t answer speed.”

The Needle-coached All Blacks never lost a game.