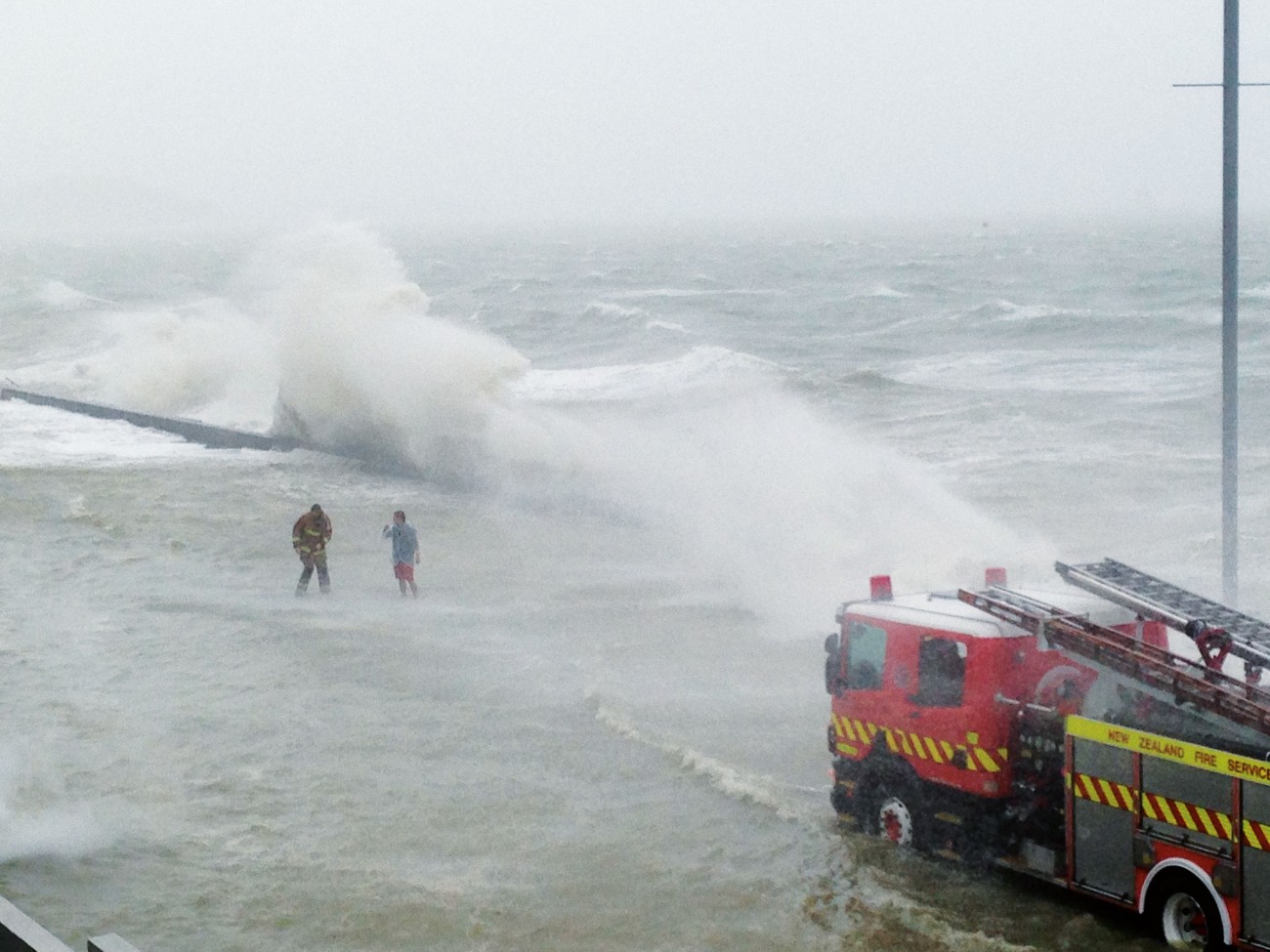 In the first week of April, a low drifted slowly over the Solomon Islands, bringing torrential rain and thunderstorms. Gold Ridge Mine on Guadalcanal had a metre of rain over four days, half of which fell in 24 hours. In the capital, Honiara, the Mataniko River flooded. Parts of the riverbank collapsed, carrying away houses and their occupants. An eight­ year-old boy was washed out to sea clinging to a log but was rescued by fishermen after several hours. In all, 23 people were killed and around 50,000 left homeless.

After the low moved out to sea, it devel­oped into a tropical cyclone. Named Ita, the low continued deepening as it headed for Queensland, reaching maximum intensity as a Category 5 cyclone with a central pressure of 930 hectopascals. It weakened to Category 4 just before landfall north of Cooktown on April 11. A maximum gust of 230 kilometres per hour was measured at Cape Flattery.

Many trees came down, cutting power to thousands of homes, and one of the oldest pubs in Cooktown lost its roof. A number of coastal homes were damaged by storm surge, but miraculously there were no fatali­ties, partly because Ita didn’t make a direct hit on a major population centre.

After wreaking havoc across the Solomon Islands and northern Australia, Cyclone Ita struck New Zealand with high wind and heavy rain. At high tide in Auckland, waves washed clear across Tamaki Drive and much of the foreshore, swept boats from the moorings, brought down trees and knocked out power.

Once over land, Ita turned southeast and ran parallel to the coast for almost 1000 kilometres. The storm weakened quickly as dry air from the continent was drawn into its centre, depriving it of energy. Friction over the land is also greater than over water and causes the wind to blow more directly into the low centre, raising the central pressure as it fills with air.

Although the destructive winds eased, heavy rain continued, causing flooding over large areas. Nash’s Crossing had 376 millimetres of rain in 24 hours while Boar Pocket, inland from Cairns, had 310 millime­tres in 12 hours.

Ita flattened banana plantations and destroyed an estimated 90 per cent of Australia’s sugar crop, causing damage esti­mated at around $1 billion.

Once Ita moved southeast over cooler waters in the Tasman Sea, it weakened further until it had only a small area of 35-knot gales around it. Then it met up with a dynamic trough in the westerlies and redeveloped explosively. The central pressure dropped by almost 24 hectopascals in 24 hours and the area of storm and gale-force winds grew to more than 500 kilometres in diameter. It was so large it was able to wreak havoc over New Zealand even though the low centre was well west of the country. Heavy rain brought flooding to many areas, while the wind knocked over trees and ripped off roofs. In Auckland, the strongest of the northerly winds coincided with high tide and lifted the sea over the road and into houses in Mission Bay.

The wind caused most damage in Buller and Westland. Easterly gales crossing the Southern Alps were concentrated by low points in the mountain ridges and screamed down the valleys, reaching speeds estimated from the damage at more than 200 kilometres per hour in places. Thousands of trees were ripped out of the ground, many houses lost roofs and some buildings were completely destroyed. Power lines were down in many places. Cars and buses were rolled over and a stationary fire truck with its brakes on was pushed along a road in Greymouth.

Heavy rain in Marlborough caused large slips, and flooding occurred in Nelson, Canterbury and Otago. One woman, trapped in her car in Otago’s Kakanui River, was rescued when a farmer drove his digger into deep water and extended the machine’s arm over the floodwaters with a policeman in the bucket to lift her on board.

In all, it was an extremely busy season for New Zealand, with the remains of four tropical cyclones affecting the country when we usually get only one. Aside from Ita, there was Cyclone June in late January, Edna in early February and Lusi in the middle of March. There was also another low that came within a whisker of developing into a tropical cyclone before it left the tropics in early April, then deepened before moving westwards over northern New Zealand.

In part, this can be attributed to the neutral phase of the El Niño Southern Oscillation (ENSO). During an El Niño, tropical cyclones tend to move southeast over waters well to the east of New Zealand.

Looking ahead to next summer, it’s likely that an El Niño will develop, because the temperatures of both the sea surface and the water several hundred metres down have warmed several degrees above average in the eastern tropical Pacific. (The warm water fuelled Hurricane Amanda to the west of Mexico so that it became the most intense May hurricane on record over the eastern Pacific.)

If an El Niño does develop, it’s unlikely that the remains of a tropical cyclone will reach New Zealand next summer. The other good news is that the sea level around New Zealand is likely to lower. During an average-strength El Niño our sea level lowers by about 10 centimetres, but during a strong event such as the summer of 1982–83 it can drop by as much as 20 centimetres.

It’s bad news for the other side of the Pacific, however the sea level there will rise by similar proportions. Combined with the increased storminess that El Niño brings to the eastern Pacific, it can cause severe coastal erosion in California and other vulner­able areas.