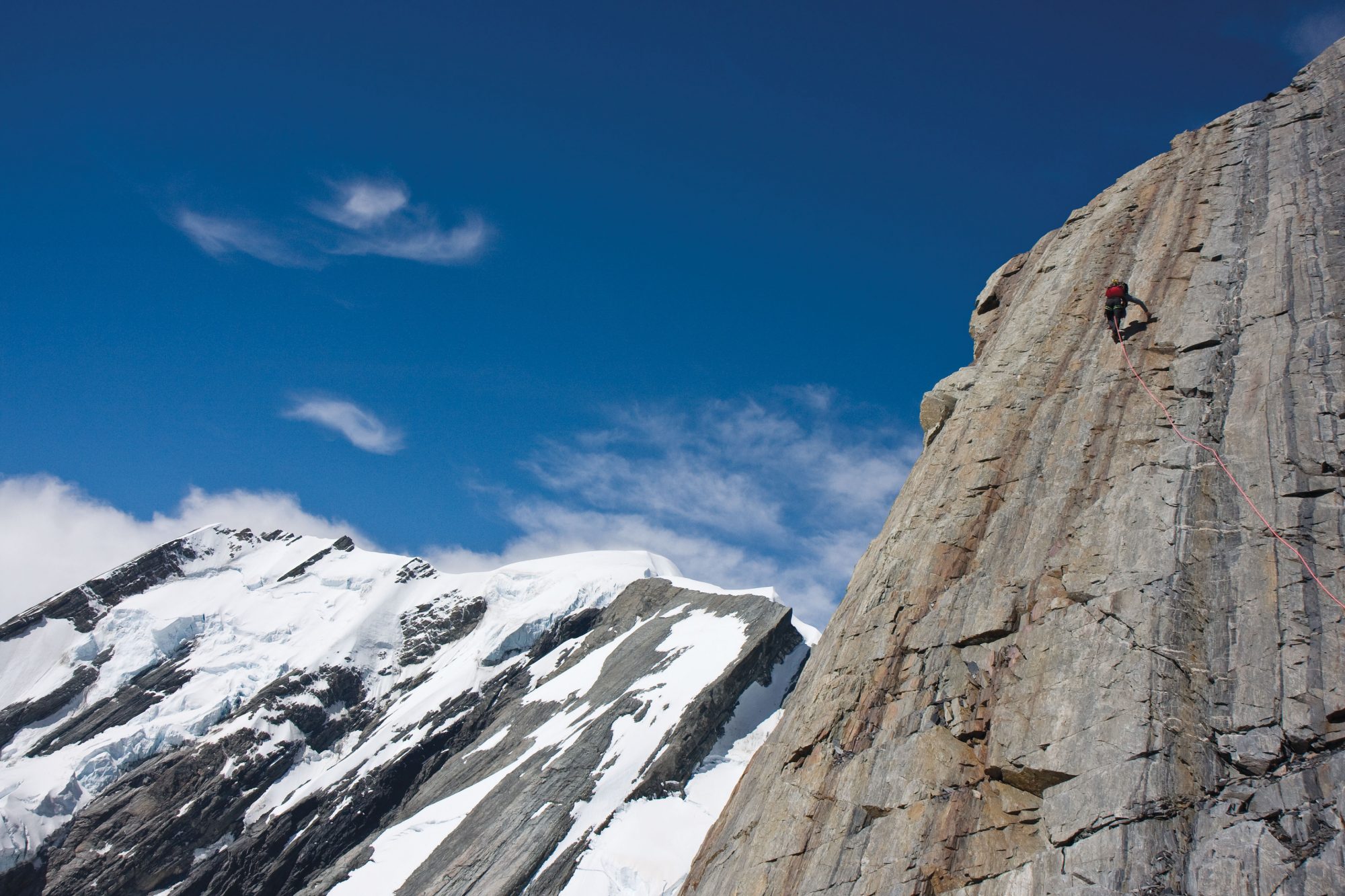 I hunch into as small a target as possible and listen to the barrage getting closer. Shutting my eyes, I try not to think about much while stones ping off my helmet. Something larger thuds close by. There’s little else to do other than swallow the sour taste in my mouth and mumble a few words of hope. Seconds drag. Eventually, and thankfully, the noise recedes to faint echoes in the gully below.

Slowly, I unfurl and peer up towards the distant summit of Mount Walter, then back down the steep rock wall that Jamie Vinton-Boot and I have spent the day climbing. After a few moments, I give up trying to work out where the falling boulders came from.

Whether threatened by rock fall or snow avalanches, crevasse-riddled glaciers or a sudden change in the weather, I manage the risk as best I can. This is what I live for—a long unclimbed route on a remote mountain, a strong climbing partner and a good weather forecast. I can focus on the here and now, on this steep buttress of rock stretching up towards the sky and on what we need to do to climb it.

In sharp contrast to the recent bombardment, the air now holds an eerie silence. The snaking curve of the Stevenson Glacier, which we started from at first light, is nearly 400 m beneath my feet, partially hidden by a swirl of cloud. Vinton-Boot is the equivalent of four storeys further up the cliff, and has been belaying me up to him, pulling in the rope tied between us through a friction device as I climb. Out of sight, he probably doesn’t realise what just happened, figuring I’ve paused to take out an anchor he had placed while leading the pitch. Perhaps the rope dislodged the rocks, or maybe it was just one of those random occurrences where luck could fall either way. It doesn’t matter any more. The moment has passed. I begin climbing again.

For as long as I can remember, I’ve had a strong desire for adventure. Maybe it was born out of reading too much Mark Twain as a youngster, or the home-grown exploits of Ed Hillary and Graeme Dingle. Whatever the reason, it wasn’t long before my brother Glen grew to dread the words, “Let’s go back that way.” I wasn’t particularly brave or tough, I just needed to get off the beaten path and explore. Not much has changed in more than 30 years.

My desire to explore a forgotten corner of Westland National Park grew from staring at it too much. Every fine morning for two years, I carried coffee outside of my rented cottage in the coastal settlement of Okarito. I leant against the railing, did battle with the inevitable sand flies and took in the view. To the east, jagged peaks appeared to float over valley cloud, their summits silhouetted 3000 m above where I stood. Mountains Elie De Beaumont, Walter, Green and others crowned a rugged landscape, towering over the remote Spencer Glacier. I promised myself I would have to climb there. It took only another 10 years to fulfil that promise.

In the past decade, few climbers—if any—have managed to reach the Spencer. There hasn’t been a first ascent there since 1983. It’s in a no-fly zone, and access has previously been forged from the top of the Franz Josef Glacier, down either the Cerberus or Styx Glaciers. But recent glacial recession means these options quickly become too broken in summer. And, in poor snow years, they aren’t accessible at all. Climate change is slowly but certainly changing the face of mountain climbing in New Zealand. According to NIWA studies, the surface area of our glaciers has reduced by 35 per cent over the past 100 years. And by the end of this century, warming in the Southern Alps could be significantly greater than over the rest of the country—an average summer temperature increase in the Alps of around 6ºC, raising the freezing level by 1000 m. Given this scenario, it won’t be long before the Spencer, along with a number of alpine environs favoured by climbers, is completely cut off.

Despite the potential access issues, Vinton-Boot and I were still drawn to the Spencer. According to trip reports gleaned from old New Zealand Alpine Club journals, the rock in this part of the Alps was of exceptional quality. And those who had ventured there mentioned large areas of unexplored terrain. After studying local guidebooks and maps, Vinton-Boot and I chose the unclimbed West Rib of an outlier peak to Mount Walter as a possible objective. Hoping to avoid the worst of the crevasses, we planned to cross into the Spencer from the east. First, we would need to climb the lower east ridge of Mount Green and then camp at Diver’s Col on the Main Divide. Just south of Mount Walter, we could then descend the narrow tongue of the Stevenson Glacier and, hopefully, reach the Spencer.

Vinton-Boot grins like a Cheshire cat as I step across to his belay ledge. Actually, the ledge is more like a single step, and slopes sharply off at one side. Vinton-Boot is anchored to the rock with various forms of metallic climbing paraphernalia linked together by a length of nylon cordelette, and he coils the rope at his feet as I approach.

My climbing partner’s enthusiasm is infectious and, despite the recent rock fall, I can’t help but smile back. “Fantastic,” I reply. “Some great moves to get over that bulge.” I don’t see the point in telling Vinton-Boot about my near-miss. Instead, I congratulate him on a good lead.

Perching on the tiny ledge, I pause and take in the view: the steep peaks either side, the jumble of ice cliffs below and the bush-choked west coast spreading out beneath our feet. Through the cloud, I can see the Stevenson and other glaciers feeding, finger-like, into the broad palm of the Spencer. In turn, the Spencer folds and twists north like a broken accordion, losing altitude between the narrow confines of the rugged Drummond and Burton Ridges. Eventually it melts into the Callery, an unbraided, tumultuous river that rushes onwards to the Tasman Sea.

I imagine that, in the distance, I can almost see the tiny bach where I lived in Okarito. For a few moments I recall my life there, a quieter, more reflective time compared to the hustle and bustle I currently experience in Christchurch.

Vinton-Boot—ever practical—unwraps a muesli bar and hands it to me. “We should have brought the stove, though. Imagine having a coffee now,”  he says.

It is my turn to lead. Vinton-Boot hands me the ‘rack’—an assortment of nuts, mechanical camming devices and pitons, all designed to be placed in cracks in the rock by the lead climber. Once secure, they are then clipped through a karabiner to the rope. This means that if I slip while on lead, I can’t fall more than twice as far as my last piece of protection.

This technique relies on two assumptions: first, that there are enough cracks in the rock to place the protection, and second, that the lead climber is able to establish a stance where he can hang off the rock by one hand long enough to place it. Soon after climbing above Vinton-Boot, I discover that the steep buttress in front of me offers neither opportunity.

The rope—our lifeline—slithers over greywacke blotched with lichen. Coarse rock scratches against my fingers, a reassuring feeling. Normally, greywacke—a metamorphosed sandstone found throughout the Southern Alps—is dull grey, brittle and a nightmare to climb. Mountaineers refer to it as having the consistency of Weet-Bix and opt instead for snow slopes and glaciers as safer options. But discovering a sustained band of pinkish, orange or red rock running through a greywacke formation like the one Vinton-Boot and I are on is like winning a lottery—it is coarse, ‘sticky’ and reliable.

One after the other, I slip my hands into a chalk-bag knotted at my waist, coating them with a thin layer of the white powder that soaks up sweat and helps with friction—a meditative act as I solve the sequence of moves ahead. The section of greywacke in front of me is almost sunset red, and near vertical. Fingertip cracks split its surface and a ramp the width of a mobile phone angles up and left.

Finally, I find a notch deep enough to push a cam into and then, slightly higher, a nut. I clip the rope through them and breathe a sigh of relief. Now I have the confidence to tiptoe up the ramp for eight metres, until it fades and the rock becomes almost devoid of edges and cracks. I pause, dipping my hands into the chalk again.

Climbing in situations like this is less a game of snakes and ladders and more about chess-like moves. Subtle changes in body position, sideways shuffles and a vague combination of pushing and tweaking with hands and feet allow progress to be made.

With hundreds of metres of fall space beneath me—something I don’t wish to consider right now—the intense level of physical and mental commitment means my whole world is nothing more than figuring out how to reach the next hand- or foothold. Time passes without notice. Life becomes very, very simple.

A muffled cry comes from below, meaning I’ve almost reached the end of the rope. I scan for a ledge suitable to belay from, but the rock drops away sharply. An awkward corner I’m bridging across will have to do. At last I find two ‘bomber’ anchor placements, and tie myself
into them. I call out ‘safe’ and start pulling in
the extra rope.

Length by length, Vinton-Boot and I measure off the climb. Sometimes we chat at belays, other times we exchange equipment and move on with only a word or two. Shadows lengthen around us as the sun sinks towards the western horizon. We don’t talk about how distant the summit may be, but it is on both of our minds. A night out on the rock would be an unpleasant experience, to say the least.

Then suddenly it appears, a flat platform that comes almost as a shock. Broad ledges follow the Main Divide in both directions. Nearby, the glacier that leads back to our tents sparkles in evening sunlight. We’ve done it, succeeding on a new route on a remote mountain. All of the planning and weather watching and effort to get here was worth it. With tired satisfaction, I gather the rope in. Vinton-Boot climbs the last few metres, joining me as a warm red glow draws across the mountains. Despite the risk, there is nowhere else I would rather be.

To Haast, the Hard Way