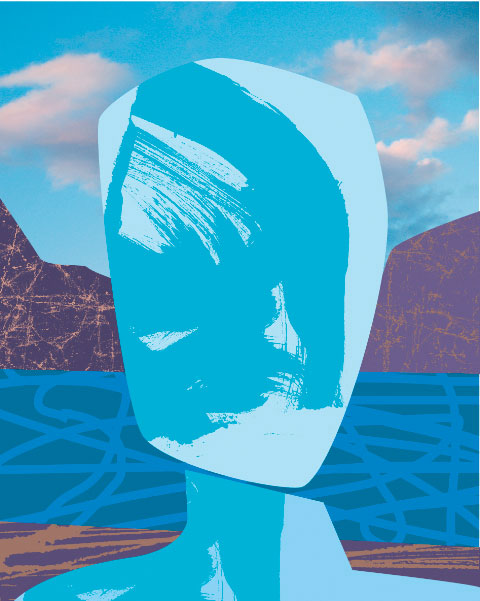 A river is never silent. Even its

or dreamy utterance. They shelter

Yes, I thought, and still think, they are always talking, as the sea is always talking. In all sorts of ways I believe rivers not only talk in and through me, they interpret me as I interpret them. And they often remind me of Thoreau and his wish “to live deliberately, to front only the essential facts of life”.

Today, alas, too many of us focus on, and are consumed by, a desire for the inessentials while, sadly, increasing numbers of people are struggling desperately to obtain the necessities. Quality of life and quantity of consumption are not synonymous, just as “green” doesn’t logically follow on from “clean” in the feel-good, self-congratulatory phrase used to promote New Zealand’s so-called specialness.

All my life I’ve longed to find and hold on to anything that’s struck me as heartfelt and constant, something that seems durable and likely enduring. I’m sure, now, that was the impetus behind another poem:

I took my rod and my heart

to the river’s side

and cast and cast

in the quickening dusk,

at my face and throat.

and all the world

seemed to be timeless.(2)

There’s no such thing as just another river to me. I treasure them all. I like the cheeky-rippled small ones that flow over bright stones between grassy and shrubby banks; I glory in the medium-sized high-country streams that dance in the sunlight and swing back and forth, cut into tussocky banks, and bound down mini-cataracts from pool to pool; I am intrigued by the sinister-like depths and shadows under willows in slow-moving waters where eddies curl and suck; I am tickled by the chill and perky small tributary streams that chatter away night and day and sparkle like jewellery.

Big rivers, too, have majesty in their might. In the late 1950s, I fell in love with the then great Ohau River in the Mackenzie Country. I later recalled it as:

a boisterous, belligerent river, full of big boulders and white, sometimes green-streaked, stones; in some sections the bottom was littered with polished lumps of Earth’s masonry. [My father] Alf said some of the pools looked as if the water ran over the ruins of Roman temples. The river’s surface flexed, bumped, bulged. If ever a river could be said to hiss and roar, have muscles, it was the Ohau. It was a heavyweight boxer, both mesmeric and appalling. I was entranced by its power and also fearful. The river said, ‘Fall in me and I shall drown you. I shall sweep you away, force you under.’(3)

Only a small section of the Ohau remains, and that only hints at its former magnificence. Over time, I have come to learn that the state of our rivers is a near-infallible guide to the health of our countryside, hence the health of the society I belong to.

But I couldn’t live without rivers. They are where “light and sound are one” and “the pull / that draws you back is the river in you / racing to keep time with the river sound”. I don’t just believe that to be true for me, I know it. “Eventually, all things merge into one, and a river runs through it,” writes Norman Maclean at the end of his story, “A River Runs Through It”. Maybe that’s why I have also remembered how my “heart leapt”:

at the sight of silver cloud

pouring over and down the Pisa Range

and you followed the blue-green Clutha

upstream to its source in the mountains.(4)

I still do that occasionally, follow the river, and will for as long as I can; as long as we don’t kill what’s left of the Clutha, and the river is silenced.

1. Listening to the River 2. Elegy in the Clutha Valley 3. Somebodies and Nobodies 4. In the Nineties.