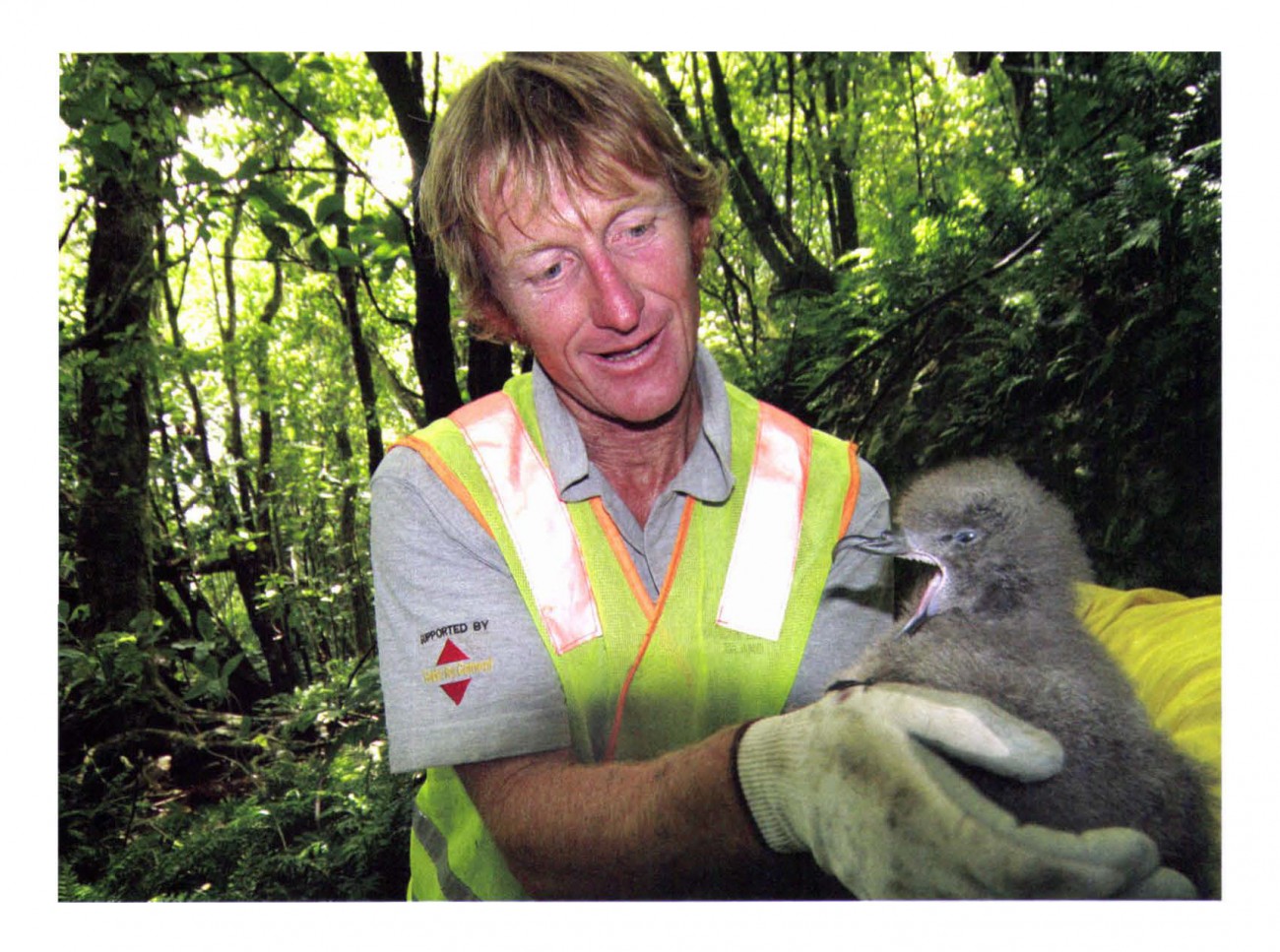 This is no typical conservation story. The grey-faced petrel/great-winged petrel/North Island muttonbird/oi is not endangered—not by any means. Grey-faced petrels breed from the Three Kings Islands down to East Cape, mostly on offshore islands, although there are a few populations on headlands of both east and west mainland coasts. They are preyed on by the usual villains—ferrets, stoats, cats and pigs—while stock can trample their burrows; and they make a fine main course for humans—traditional harvests still take place in some areas. Despite such pressures, though, they remain plentiful.

However, as part of the rehabilita­tion of 37 ha Matakohe/Limestone Island in Whangarei Harbour, it has been decided to try to establish a population of grey-faced petrels there. An undertaking by Friends of Matakohe/Limestone Island (FOMLI), the project involves housing chicks in artificial burrows, where it is hoped they will fledge before tak­ing off on their big overseas experi­ence—typically a seven-year jaunt—and eventually making their way back to the island to breed. Chicks were collected for translocation in late 2004 from Taranga Island, in the Hen and Chicken group, and more are to be transferred over the next four years.

Landing at Dragon’s Mouth Cove on Taranga Island at first light, we are ferried ashore in an inflatable boat hauled by a rope-and-pulley system. The group assembles on the beach for a karakia led by our Ngatiwai representative, Phil Heteraka.

The Maori name oi comes from the high-pitched call the birds make during flight. I ask Phil what the Maori is for “extraction from the burrow”. I draw a blank look, but a quick cellphone call to a family member on the mainland reveals that “tongia te manu oi” is what we are here to do today.

Our military-style briefing be­gins. If a chick has left its nest, we also leave it; handle chicks like this; traverse the terrain sideways. We are shown the series of burrows that were located, “GPS’d”, marked, mapped, coded and recorded dur­ing a five-day operation at the end of October. The six people involved checked over 1000 burrows to find 50 suitable chicks. Only one-third of the burrows were accessible without excavation, and these were reno­vated with a rock lid to make the extraction of chicks easier.

In addition to standard-issue white gloves, we are given bum bags con­taining all necessary tools for pulling chicks. Given that four out of five of them will projectile vomit soon after being removed from their bur­rows, it’s an unenviable task. We are instructed to point the birds’ heads away from us.

Our first and second chicks are located and boxed within minutes. They are surprisingly plump (490 g) for their 70-80 days of age, with a distinctive curved bill. Blood will be drawn more than once during the day.

Passing a tangle of supplejack, Phil is inspired to demonstrate a tradition­al harvesting method. His knife is out, the end of a length of vine is splayed to form an oi spear, and within mo­ments he has caught a bird.

The scramble up the side of Taranga Island is extremely hard work as the land is steep and lush coastal broadleaf forest covers every inch.

A group of burrows along the top ridge borders a Maori burial ground—a no-go zone. We are told that over the years hundreds of bod­ies have been lowered into crevices along here. It’s an eerie feeling to think that the remains of so many lie so close.

A point 350 m up is our base for the day. White boxes are as­sembled, lined with shredded paper and stuffed into backpacks ready to ferry chicks back to the large rock from which a helicopter will collect them later in the day. The correct way to extract a chick from a bur­row is by the bill, although it looks uncomfortable for the bird. Some of the burrows need to be enlarged, as the chicks have grown so fat. They lose weight before they are capable of flying.

A solid day’s toil amasses the 40 chicks required to tenant the new man-made burrows on Limestone Island. The birds are quickly loaded into a cargo net for their first flight—a brief hop down to the lighthouse, where they are packed inside the chopper. Project team leader Co­lin Bishop gives a howl of delight as he watches the birds disappear.

For the last nine years Mata­kohe/Limestone Island has had a human population of one—a resident ranger, Colin Bish­op. However, this isn’t a true indica­tion of its human history.

The first people to live here were Ngaitahuhu, in the early 1700s, and the island has since hosted a flax-processing plant and a lime works. The coun­try’s first bag of Portland cement was produced here.

FOMLI hopes to return the island to coastal broadleaf forest and restore its pre-human fauna. Planting days are organised with help from the local community and schools, and 10,000-20,000 native trees sourced from the sur­rounding ecological area are planted every year. Fern birds, New Zealand dotterels, variable oystercatchers, banded rails and flax snails inhabit the island. North Island brown kiwi have been reintroduced, the island serving as a crèche for the Bank of New Zealand kiwi recovery pro­gramme Operation Nest Egg. The kiwi population hit 20 recently with the hatching of Ahi Kaa (“Keep the home fires burning”), the first kiwi chick to hatch on the island.

Today the island is abuzz with activity and anticipation. Committee members have taken time off work, while school children, iwi representa­tives and other locals have all been ferried across from the mainland.

After today the oi will belong to two iwi: Ngatiwai, from Taranga, and Te Parawhau, the people of  Matakohe/ Limestone Island. Members of Ngatiwai accompany them in the chopper and formally hand them over to Te Parawhau as part of the welcome ceremony.

Helen Gummer from DoC is on hand to perform a health check and unload the precious cargo. An authority on petrels, she has been brought in as a temporary island resident.

Wallace Heteraka explains the importance of scales to a fish, and how three symbolic scales—a plant, a feather and a rock—have been brought from Taranga Island to stay with the birds on Matakohe Island.

Te Ihi Tito (Te Parawhau) says, amid giggles and general laughter, “Thanks, Ngatiwai, for bringing the of from Taranga to Matakohe. I won’t have to go so far to get a good feed! They taste good, and even though now isn’t the time, hopefully one day the massive increase in numbers will allow harvesting.”

Those in charge of the chicks are concerned that the formal proceed­ings have kept them cooped up too long. The birds are transported to­wards the top of the island to a cor­rugated iron lean-to, where they are measured, weighed and rehydrated.

Their new homes, numbered 1 to 40 in a buried plywood and plastic apartment-style complex, face straight down the harbour towards Taranga.

Helen Gummer will live on site over the coming weeks to oversee the hand-rearing of the chicks until they fledge. “I find it a privilege to use my skills for this project because it really is a community project run by the island trust and fully supported by local schoolchildren, environmen­tal groups, iwi, DoC and the World‑wide Fund for Nature.”