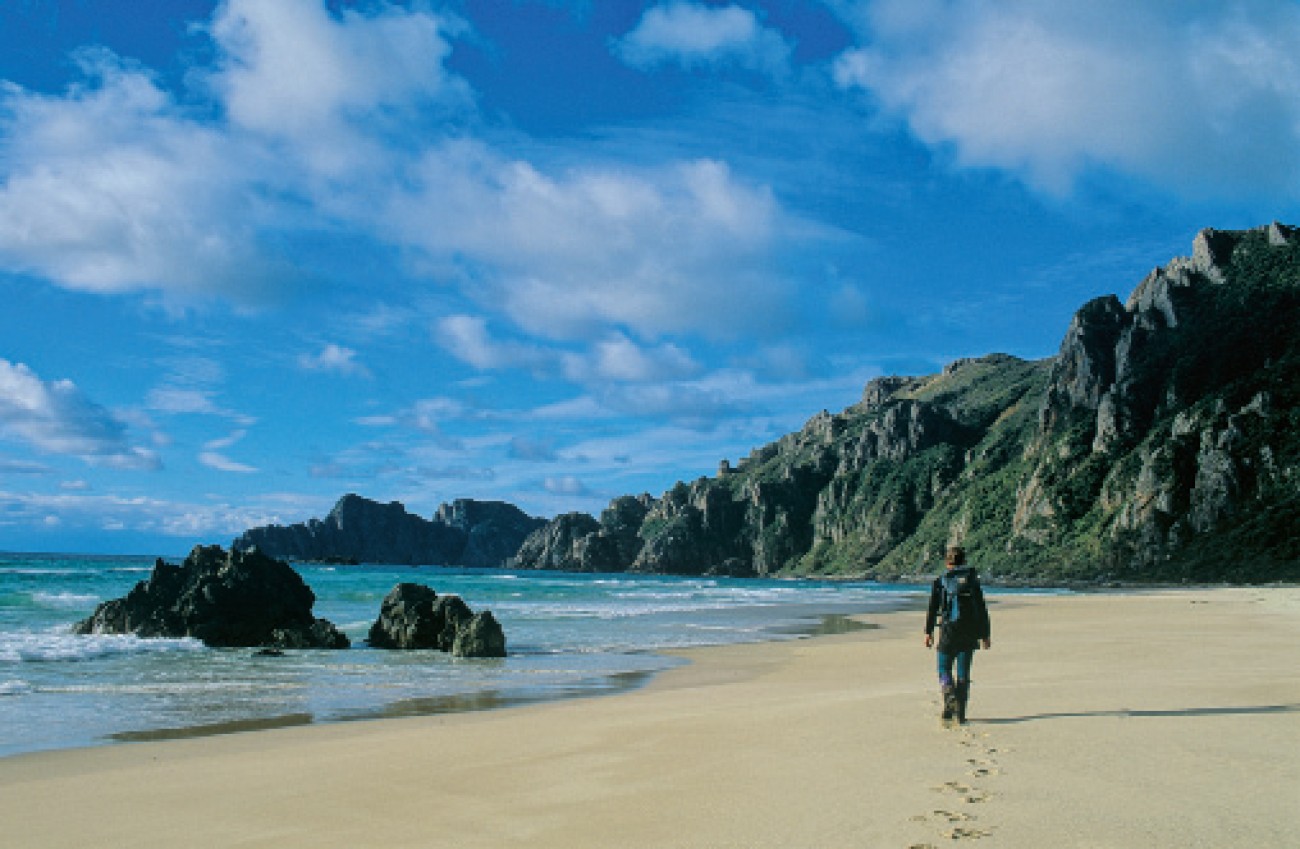 When it was created in 2002, Rakiura National Park became New Zealand’s 14th Great Walks. The 140,000 ha park encompasses about 83 per cent of Stewart Island, the smallest of New Zealand’s three main islands.

Rakiura’s North West Circuit offers trampers a rare opportunity to walk for several days along a natural coastline. While not a suitable tramp for novices, the circuit has a multitude of attractions: rugged granite coastlines; rimu and southern rata forests rising from a profusion of crown ferns; extensive wild dunelands; and often radiant sunsets.

Although the tramping is not overly difficult, some of the long days require con­siderable stamina, and trampers need to be prepared to spend extended periods in muddy conditions. If you’ve tired of groomed trails, the North West Circuit will confirm that even DOC’s expertise in track-making can’t wholly tame the muddy wilds of Stewart Island. Aside from the superb scenery, the island is well-known for its birdlife. Trampers often see southern tokoeka—the kiwi present on Rakiura­ wandering around during daylight hours, despite their nocturnal habits. Kaka and kakariki are also present in numbers generally better than on the mainland.

The North West Circuit can be walked in either direction, but the anticlockwise direction gives a gentler introduction to the tramping. By the time you reach the longer, harder days on the western side of the island your pack will be lighter and your fitness better. By catching a water taxi out from Freshwater Landing trampers can shave off a couple of days’ less interesting walk at the end.

From Oban, 90 minutes’ walking on roads leads to Lee Bay. The first day of the North West Circuit follows a section of the Rakiura Track, one of DOC’s eight Great Walks, where the standard of track is high, with little mud. From Lee Bay the track crosses forested terrain, mostly near the shore, until it emerges at the eastern end of Maori Beach. At the western end of Maori Beach, the track crosses a swingbridge over a tidal inlet, and climbs around a headland around Wooding Bay, passing a turn-off to North Arm Hut en route. From here the track descends to Magnetic Bay. Port William Hut is located at the northern end of the bay, reached on a five-minute side track.

From Port William Hut, return to the main track and head northwards. Near Sawyers Beach, the track crosses a footbridge and almost immediately heads inland again, cutting across for­ested terrain to Little Bungaree Beach. After crossing another footbridge, the track meanders beside a stream briefly before climbing over a low spur to Big Bungaree Beach. The hut lies near the northern end of the beach.

From Bungaree Hut, the track crosses another forested ridge, then sidles to reach the southern end of Murray Beach. At the end of Murray Beach, the track heads inland, passing an excellent campsite, and soon crosses a bridge, near an old steam-driven log-hauler slowly being con­sumed by the forest. From here the track follows an old logging tramline through regenerating forest for about 30 minutes. For the next 90 minutes, the track traverses undulating, forested terrain, past Christmas Village Beach. Christmas Village Hut is a further 30 minutes on.

About 20 minutes after departing Christmas Village Hut, trampers reach the Mt Anglem turn­off (those wanting to climb Mt Anglem, at 980 metres Stewart Island’s highest peak, will require a whole day as the muddy track takes three to four hours each way). For the next three hours, the track continues westwards, passing through some stands of rimu, with generally dry travel. After reaching the coastline again, the track follows the length of Lucky Beach before heading inland for another three hours, again crossing undulating forested slopes with some tall stands of rimu. At Yankee River a five-minute side track leads down to Yankee River Hut.

After crossing a swingbridge over the Yankee River, the track climbs 220 metres over a forested knoll before descending to Smoky Beach. This is one of the longest beaches on the northern part of Stewart Island, with many sand dunes. At the western end of Smoky Beach there is a flood route up to a swingbridge over Smoky Creek, but in most conditions trampers can simply cross the creek to where the track enters the forest again. The track wends across undulating slopes for about two hours before descending to Long Harry Hut. The attractive new hut lies at the eastern end of Long Harry Bay.

From Long Harry Hut the track ambles above the coast, then descends to the old Long Harry Hut site (look out for kiwi on the track here). From here the track follows a forested ridge then descends to a bouldery beach. At the far end the track climbs 200 metres through manuka forest to a spectacular viewpoint overlooking East Ruggedy Beach, before descend­ing steeply through manuka and muttonbird scrub to emerge at Ruggedy Stream. Don’t be alarmed by the quicksand here – just walk briskly until you are across the stream and then head up-valley for 20 minutes amongst dunes to reach East Ruggedy Hut.

In recent years this section of track has been considerably re-routed making it easier, less muddy and more scenic. Shortly after leaving East Ruggedy Hut, the track crosses un­dulating forested terrain before descending through dunes to West Ruggedy Beach. This spectacular beach, with its granite pillars and rolling dunes, is followed for almost its entire length to the end. Offshore lie the aptly named Ruggedy Islands, looking like a stack of rock toast about to collapse. The track follows the beach, but at high tide it may be necessary to scramble over a rocky outcrop. At the far end of the beach, the track enters forest to begin a slow sidle around the northern slopes of the Ruggedy Range. The track crosses the range through a low pass at about 240 metres.