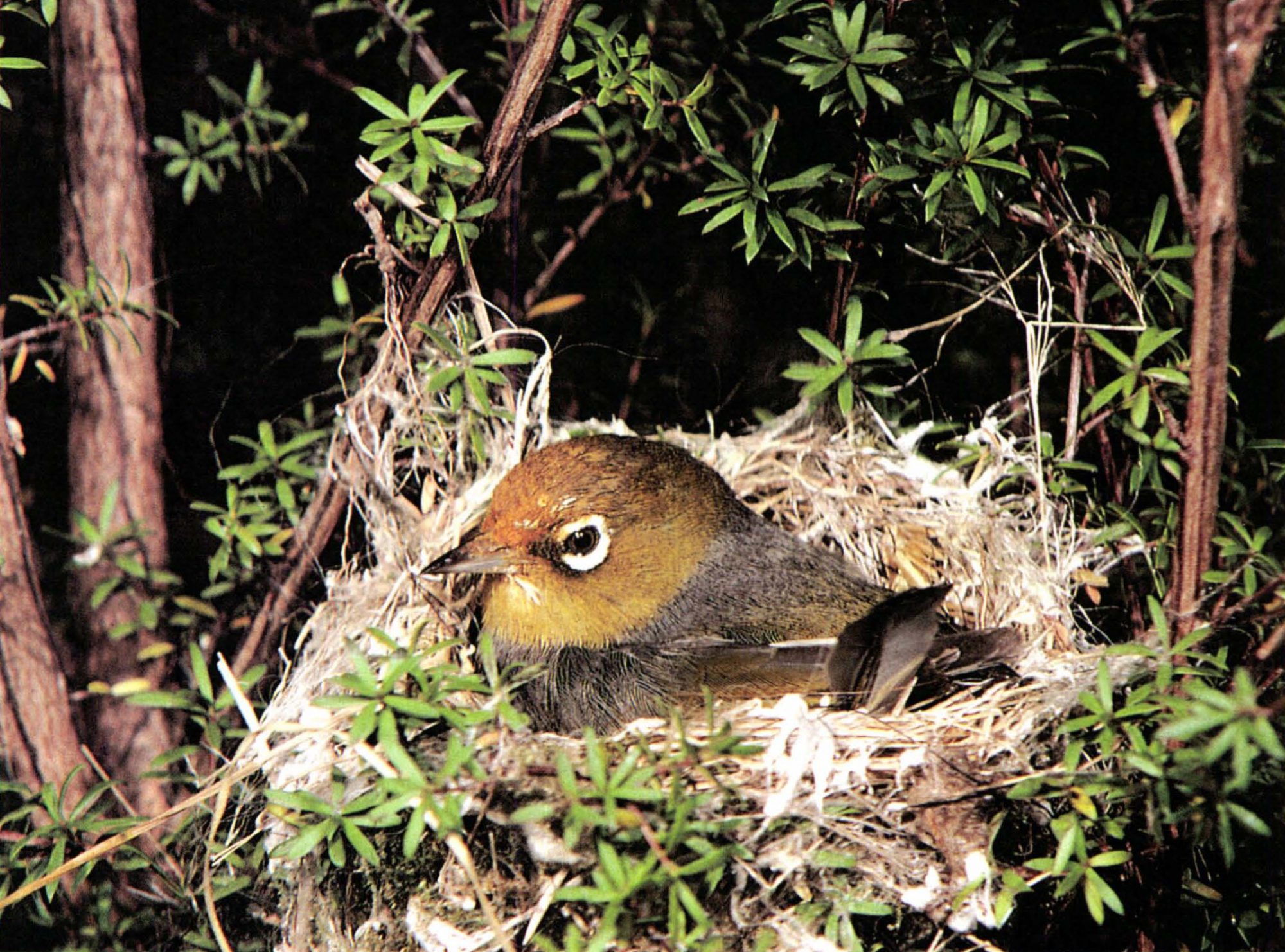 One of the most successful immigrants of the European era, and our earliest recorded arrival, was the silvereye or waxeye. First noted in 1832 in Milford Sound, its numbers and geographical range rapidly expanded from the mid 1850s until now it is one of the commonest birds throughout the country and even as far afield as the sub-antarctic Campbell and Auckland Islands.

Equally at home in the bush or in towns and cities, the silvereye is a prolific breeder, capable of nesting three times in a season. Flowering Banksias, Grevilleas and Kniphofias will bring flocks of them into gardens. As well as being ardent nectar-sippers they take large numbers of insect pests. However, they also have an appetite for soft fruits and can be very destructive in berry gardens and orchards.

Exactly a century after the arrival of the silvereye a further Australian species became a permanent feature of the landscape. Close to Invercargill a pair of spur-winged plovers began breeding. Twenty years later the population had swelled to 100 and from that time on they multiplied rapidly, colonising. the South Island and now spreading through the North.

Spur-winged plovers are birds of the open country, nesting when the paddocks are wet, frequently in the middle of winter. The nests are extremely hard to find, the greenish eggs with dark blotches blending in with the grass and mud.

Our plovers differ in temperament from their Australian counterparts, which have a reputation for being extremely aggressive around the nest. New Zealand birds are more docile, simply slinking away and emitting the odd squawk if disturbed. Of the ducks which have made the trans-Tasman crossing, only the grey teal has successfully colonised and begun to increase in numbers. The bird has a protected status, but many are accidentally shot each year, probably mistaken for grey duck and shoveller.

During the 1940s white-faced herons and royal spoonbills arrived and began breeding. Spoonbills have been slow to multiply, but with numbers up to 100 or more, their success seems assured. White-faced herons have made a more impressive start. Adaptable to a wider range of habitats and concealing their nests in the tops of tall trees, they are now abundant throughout the country.

Flocks of up to a hundred can be seen feeding in estuaries and paddocks. Never in their homeland in southeastern Australia do they congregate in such numbers. There they must compete with four species of egret, a variety of other herons and Australia’s 24 species of raptor (birds of prey), many of them accomplished nest-robbers.

As colonisers, welcome swallows have been every bit as successful as silvereyes. The first nest was found in Rangaunu Bay, Northland, 30 years ago. Now the birds are common throughout the country, though there are fewer in the far south. Swallows naturally nest in caves and cliff hollows, but mankind has been generous in providing sites in buildings and under bridges and culverts. They are friendly birds and, given an obliging host, will return year after year to nest under a porch or in a garage or shed.

A few years after the arrival of the welcome swallow a new species was noted on the stony river beds in Hawke’s Bay. Black fronted dotterels had made the crossing and by 1960 it was discovered that they were breeding. Occupying a similar niche to the native banded dotterel, they spread rapidly throughout the lower North Island, having little apparent effect on the native species’ numbers, and are now spreading down the east coast of the South Island.

Our banded dotterels reach Australia in their thousands each year during their summer migration, but as yet there are no nesting records for them there.

Hoary-headed grebes first nested here in 1976 but do not seem to have multiplied. Little grebes can now be found in small numbers in both the North and South Islands, but are far from common anywhere, though their numbers are increasing. They build their floating nests on small ponds and raise two broods of delightful striped young in a season.

The late 1950s and early 1960s were a busy time for Australian immigrants. Coots joined the exodus and were found nesting in Otago in 1958. Much more aquatic than their relatives the pukekos, they are rarely found far from permanent water. They swim strongly, propelled by curiously-lobed toes. Even their nests are usually partly floating, attached to reeds or willow branches. Coots become very tame around lakes and ponds in town areas, joining mallards and black swans in scavenging for picnickers’ handouts and making little effort to conceal their bulky nests. They have become especially common on Rotorua’s lakes, where flocks of hundreds can be seen in autumn and winter.

The traffic in birds will doubtless continue. Over 1000 cattle egrets visit New Zealand each year, arriving in autumn and departing for their nesting grounds on Australia’s east coast during spring.

The birds were introduced to Australia to help combat cattle ticks in the north. So far they have not nested here. Perhaps they will one day; it must be a debilitating flight back to Australia against the westerlies which blow so consistently in spring. With their slow, apparently laborious way of flying, cattle egrets seem ill equipped to undertake such arduous journeys.

Only one native bird has successfully reversed the migratory trend: a species which has thrived in New Zealand since human expansion commenced — the black backed gull. These gulls were found nesting on an island off New South Wales in 1958 and now there are colonies nesting on a number of offshore islands. White-fronted terns have also been recorded nesting in very small numbers on islands in Bass Strait. These birds are quite fickle in their choice of nest site and where one year they are nesting successfully in their hundreds, they might be totally absent the next. Who knows, some day they may be one of the common nesting birds in eastern Australia, helping even up the two countries’ “closer ornithological relations”!