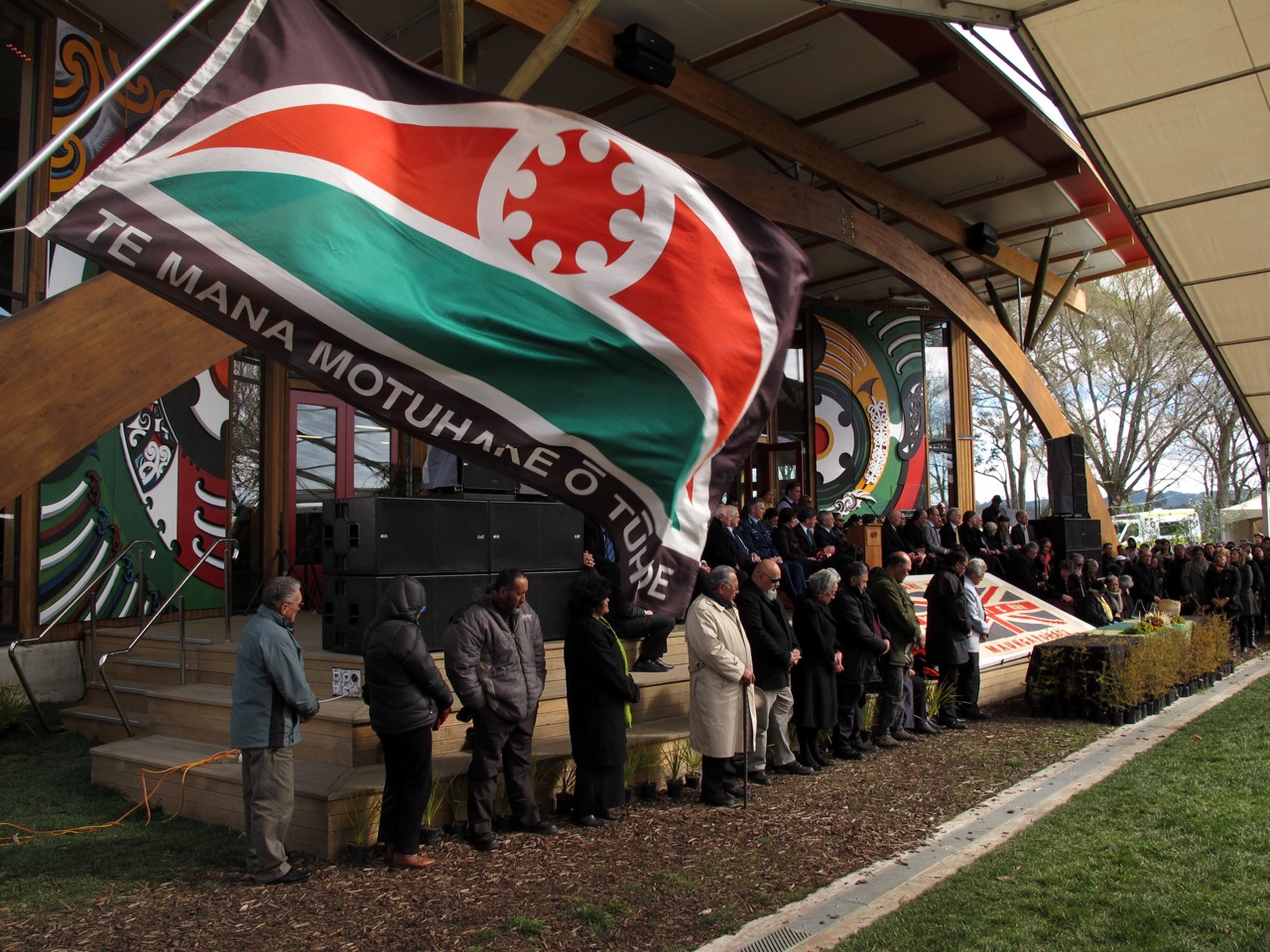 The day-long celebration at Taneatua was a milestone in Tuhoe’s long journey towards recovery of mana and return of their homeland, Te Urewera.

The Minister of Treaty of Waitangi minister Chris Finlayson delivered a long and thoughtful oration which included the Crown’s apology to Tuhoe for close to 150 years of unjust and at times brutal treatment. (The text of the speech can be read here: http://www.beehive.govt.nz/speech/address-tuhoe-crown-settlement-day-taneatua)

Adding substance to the verbal apology was the return of two significant taonga: a taiaha and a flag.

The taiaha, named “Rongokarae,” had been given to Premier Richard Seddon in 1894 by Tuhoe rangatira Kereru to symbolically reaffirm an earlier peace compact between Tuhoe and the Crown and to “set the scene for discussions on the establishment of a self-governing Te Urewera Reserve,” said Finlayson.

“It is my great pleasure to tell you that the taiaha gifted by Kereru to Premier Seddon 120 years ago, is to be returned by members of his family who are with us today.”

Finlayson invited a great-grandson of Seddon to bring forward the beautifully carved weapon, which was then placed on a table at the front of the gathering. A few minutes later, an elderly descendant of Kereru came forward. He picked up the spear and lifted it above his head, slowly turning in a circle so all could admire and welcome it home.

By orchestrating the return of the taiaha, the minister said, “the Crown wishes to reaffirm our mutual desire for peace. Let Rongokarae once again be a symbol for renewed trust, peace and quietness between us”.

An even more intense moment occurred with the return of Rua Kenana’s flag. The large and striking flag had flown at Rua’s community at Maungapohatu, in the heart of Te Urewera. It was taken during the notorious police raid on the settlement in 1916, in which Rua was arrested and two Maori were killed, including one of Rua’s sons.

The flag, a Union Jack on which is added the words (in Maori): “One law for two peoples”, was appropriated by police to be used in Rua’s trial for sedition—although how a message stating that Maori and Pakeha are unified under Pakeha law can be read as “seditious” boggles the mind. (Rua was cleared of sedition charges at his trial in Auckland, but imprisoned on minor legal grounds.)

“For almost 100 years the flag has been in the Crown’s possession,” Finlayson told the crowd. “Since 1930 it has been cared for by the Auckland War Memorial Museum. Today we join together to help restore that injustice by returning the flag to you.”

The minister paused while museum staff solemnly carried the rolled up flag to the front of the meeting and slowly unrolled it, fixing it to a board. Loud applause followed. Then something remarkable happened. A woman dressed entirely in black, with a black shawl over her face, walked in, wailing loudly.

Supported by two younger women, she took up a position at the edge of the flag, stroked the cloth and made a tangi for the flag, drawing up the deep, unabated grief of the raid and the two deaths that resulted.

At the conclusion of the speechmaking, I watched a long line of people file past the flag, paying their respect to a past still keenly alive in their minds, yet eased of some of its trauma by the Crown’s apology and the Treaty settlement.

“Through this apology and settlement the Crown hopes to honestly confront the past and seeks to atone for its wrongs,” said the minister. “Let these words guide our way to a greenstone door—a tatau pounamu—which looks back on the past and closes it, which looks forward to the future and opens it.”

The gifts added their own eloquent expression to those solemn words.