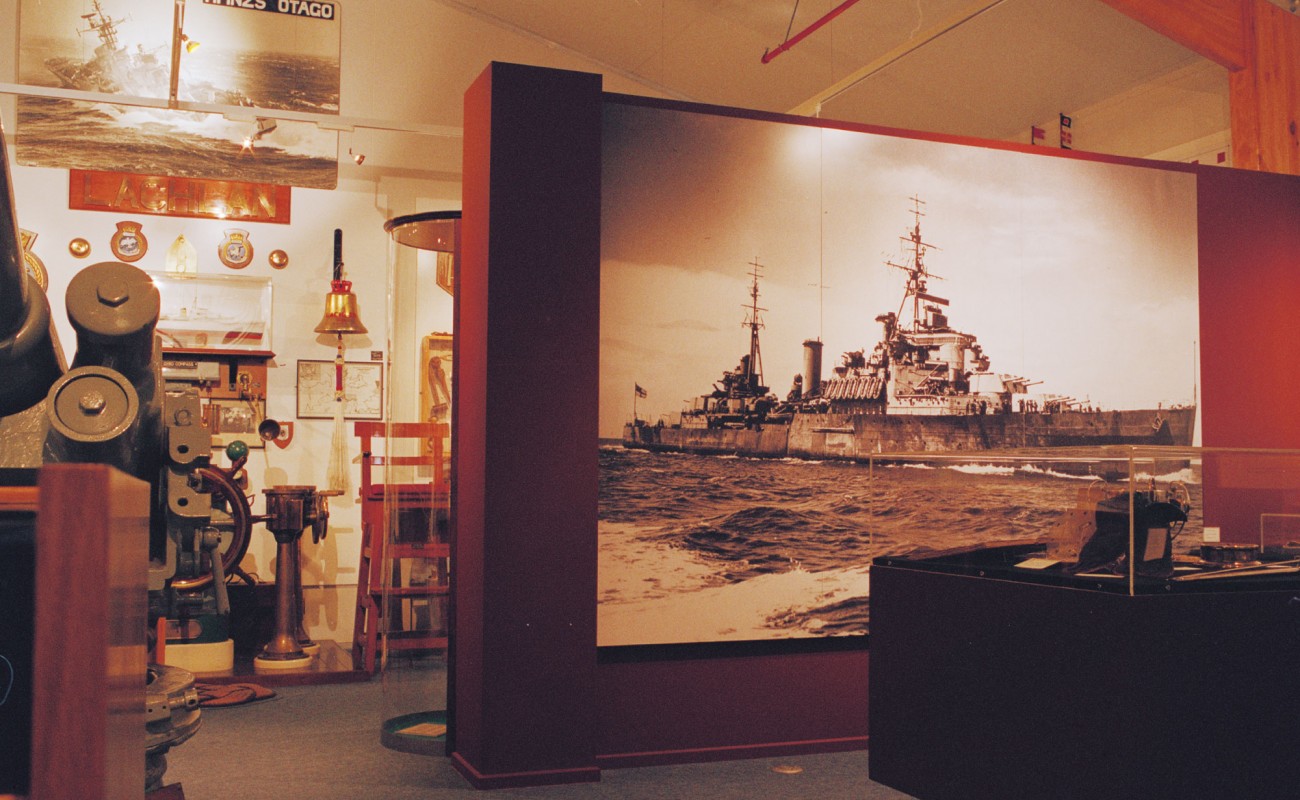 The Royal New Zealand Navy Museum displays a record of the navy’s role in New Zealand and of the brave men who have served in “Her Majesty’s”. Located next to the Devonport Naval Base, the RNZN Museum was once part of the navy complex itself and access restricted to navy personnel. When it was shifted to a new site in 1982, the doors were opened to the public for the first time.

Collections Manager, Acting Director, and 21-year navy veteran, Cliff Heywood exudes passion about his work even after thirteen years in the job. “There’s so much interesting stuff in here,” he says. “If you’re a navy buff you can spend hours looking through it.” Indeed it is easy to lose an hour or two meandering through but you do not have to be a navy fanatic to become absorbed.

Some exhibitions are permanent, others temporary. “We change the temporary exhibit about every six months,” says Heywood.

The temporary exhibition when I visited was about HMNZS Gambia which was loaned from the Royal Navy for the final years of World War II after New Zealand’s two cruisers Leander and Achilles were damaged in the Solomon Islands campaign. Gambia, a near-new Fiji class cruiser, saw action in the Pacific while serving with the Eastern Fleet and the British Pacific Fleet.

As the cease-fire with Japan was being announced on 15 August 1945, Gambia came under attack from a Japanese aircraft and together with a US ship downed the plane. Gambia’s were reportedly the last shots of WWII fired in anger.

Unfortunately it was not just Japanese planes that were destroyed by Gambia. A United States Hellcat fighter was accidentally shot down as Gambia engaged a Japanese air raid. However, the ship made amends when she towed the stricken cruiser HMS Ulster 760 miles from the Sakashima Islands to the safety of the Philippines. At the time it was the longest rescue mission of its type, and with limited maneuver­ability and speed, both vessels were under constant threat from Japanese submarines.

The story of HMS New Zealand, a ship paid for by the people of New Zealand and gifted to the Royal Navy, is the subject of the next tem­porary exhibition. The RNZN Museum also does off-site exhibi­tions. “We take the museum to the people if you like,” says Heywood. Ironically in a museum dedicated to the navy, one of the most interesting and heart-warming stories is that of a civilian.

Ma Burrows, as she was affection­ately known, lived next to the base and on Sundays took fresh baking down to the yards. She also left each Sunday with an armful of clothes to be darned for the young sailors.

When she died in 1933 Ma Bur­rows was given a full naval funeral and to this day is the only civilian New Zealander to have been given such an honour. “The boys gave her a long service and good conduct medal,” says Heywood. “A normal sailor’s medal is made of silver but they made hers of gold. She was held in very, very, high regard.”

Courageous sailors are remem­bered in the medals exhibition where in a nice gesture and a break from navy tradition, rank is insig­nificant. “It doesn’t matter if they were an admiral or a junior seaman, everyone gets treated equally in this corner,” says Heywood.

That said, special mention is given to Lieutenant Commander William Sanders, the only New Zealander awarded the Victoria Cross while serving in the navy. His was a story of bravery while in command of the Q-ship HMS Prize during WWI.

Ostensibly merchant ships, Q-ships also carried well-disguised heavy armaments and were used in the war against submarines. The aptly named Prize was a captured German schooner.

Rather than waste precious torpe­does on merchant shipping, subma­rines would surface to engage their quarry with gunfire and generously fired a warning shot across the bow of their intended target.

A designated panic-crew took to Prize’s lifeboats to give the appear­ance of abandonment before Sand­ers and the remaining crew enticed the enemy as close as they dared before unleashing a surprise attack.

Twice Sanders successfully out­witted German U-boats. However, on the third encounter Prize was sunk with all hands when the U-boat returned after it was presumed destroyed.

Sanders received his Victoria Cross and a Distin­guished Service Order post­humously. Navy folklore has it that Q-ship commanders had the strongest constitu­tion of all naval officers.

In the entrance gallery is the start of a chronological display of the navy’s role in New Zealand that dates back to 1642 when Dutchman Abel Tasman first discovered New Zealand.

Further inside, the central gallery details the navy’s role in domestic and international conflicts but the museum is not all about battles and weapons.

Other exhibits tell of search and rescue, Antarctic support vessels, seamanship, training of tradespeople, and sport. There is also an interac­tive area for children and a special section is dedicated to the female navy staff known as Wrens.

Heywood admits that space is limited, particularly for more recent exhibits and as the museum grows, relocation will again be necessary.

Exhibits are mainly items donated by ex-servicemen or items deemed obsolete by the navy—such as a cat-o-nine-tails—and given a final resting place in the museum.

Like the navy it salutes, the RNZN Museum is small. It is, however, rich in interesting content and has an inti­mate feel with staff members keen to mingle with visitors and spin a yarn about the exhibits.

Heywood says visitor numbers are around 10,000 per year. “Many of our visitors are from Auckland, but as word spreads, we are getting a lot of people from further afield,” he says. “We also get a lot of school groups.”

Unbeknown to staff, the museum was listed in the international travel book The Lonely Planet Guide and this, says Heywood, has brought many international visitors through the doors.

Although the navy operates 365 days a year, staff at the RNZN museum have the luxury of three days’ rest when doors remain closed on Christmas day, Boxing day, and Good Friday.