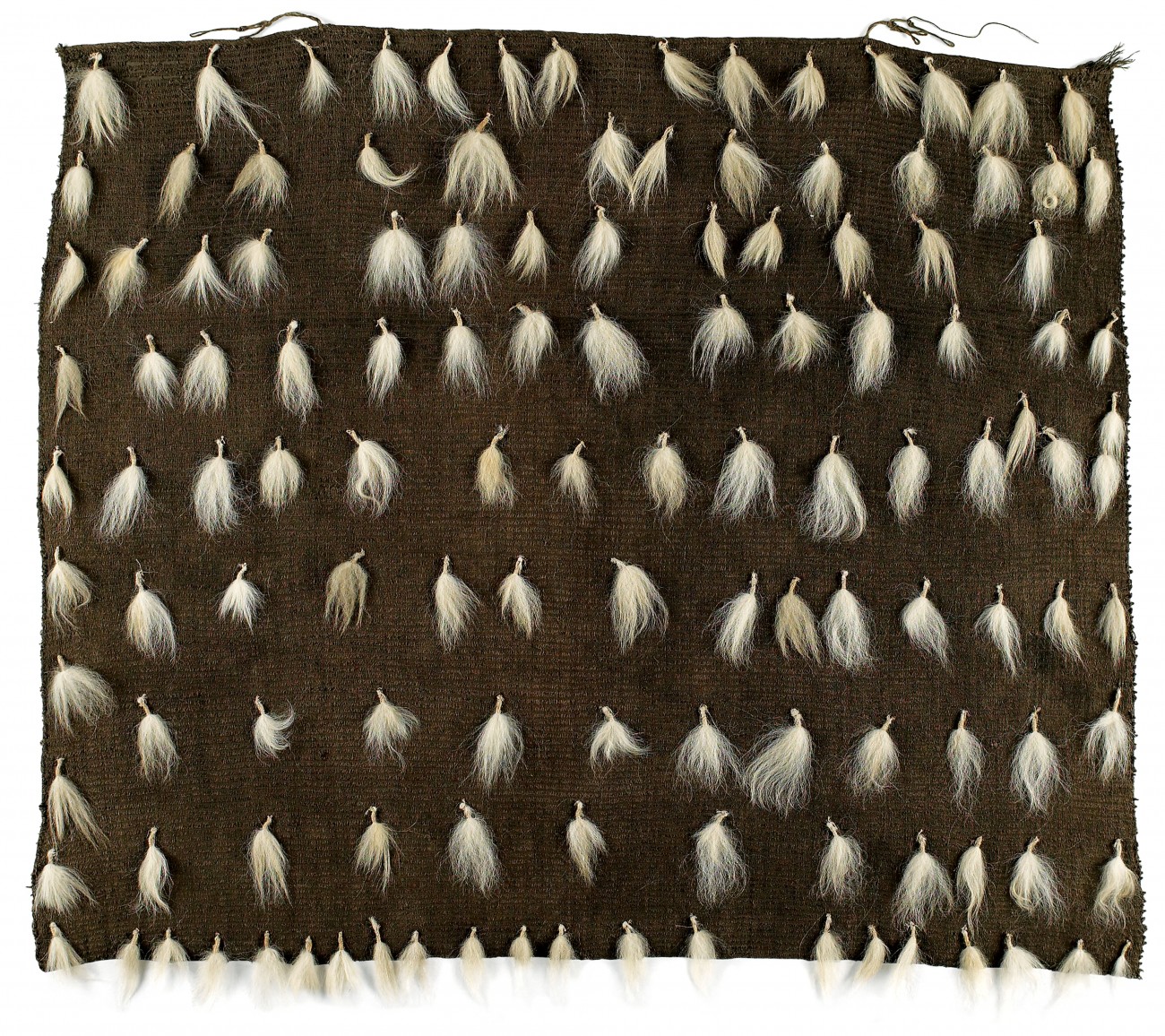 This kahu waero is a rare form of dog-cloak, distinctive for the tassels of dog hair decorating it, cut from the tail of a white-haired dog. According to Henry Roth in The Maori Mantle, such dogs slept in the house on clean mats, “so that their precious tails should be kept as white as possible… This operation of shaving its tail was quite unique…and was never performed by a common person.”

Until recently, little was known about this exquisitely crafted garment, held in Te Papa, but this isn’t unusual; around 60 per cent of Maori taonga held in the museum are of unknown origin. However, much of the history of this particular cloak has been recovered, thanks to the research of Awhina Tamarapa, curator of taonga Maori at Te Papa. It’s a history that is, in many ways, emblematic of the histories of many museum artefacts—having been stolen, retrieved, and passed through various hands and institutions before, thankfully, ending up in the care of our national museum.

As Tamarapa discovered, the cloak was made by Te Wharetoroa Tiniraupeka, also known as Margaret Graham, who was born in 1863 at Tarawera, survived the volcanic eruption of 1886, and died aged 101.

It was purchased by the Dominion Museum in 1909. But what the museum cu­rator didn’t know and nor, presumably, did the man who sold it, was that the cloak was stolen. This became apparent 12 years later when Tiniraupeka and her partner, George Graham, visited the museum and saw her cloak on display.

Letters were writ­ten and eventually the cloak was returned to Graham’s Auckland law office in 1922, presum­ably to hold on Tinirau­peka’s behalf. In the 1930s, it was deposited in the Auckland Muse­um, as part of Graham’s personal Maori and Pa­cific collection, and re­turned again to Graham at his request in 1946. It’s unclear what hap­pened to it then, until it turned up at a public auction house in Wel­lington in 1991 and was bought by the National Museum (now Te Papa) for $5000.

Tamarapa’s research into the background of the cloak culminated in tracking down and interviewing Hilda Inia, Tiniraupeka’s grand-niece, who had been raised by her great-aunt in Rotorua, and who recalled a formidable, intel­ligent kuia and a shrewd businesswoman.

Reconnecting descendants with taonga, says Tamarapa, is “one of the most rewarding aspects of curatorial work”. Some family members wanted the cloak returned, but Inia (who has since died) disagreed, telling Tamarapa that it was “safe in the museum…As far as I’m concerned, it will always be there…If they want to see it, they only have to look at the books, they’ll see where it is.”