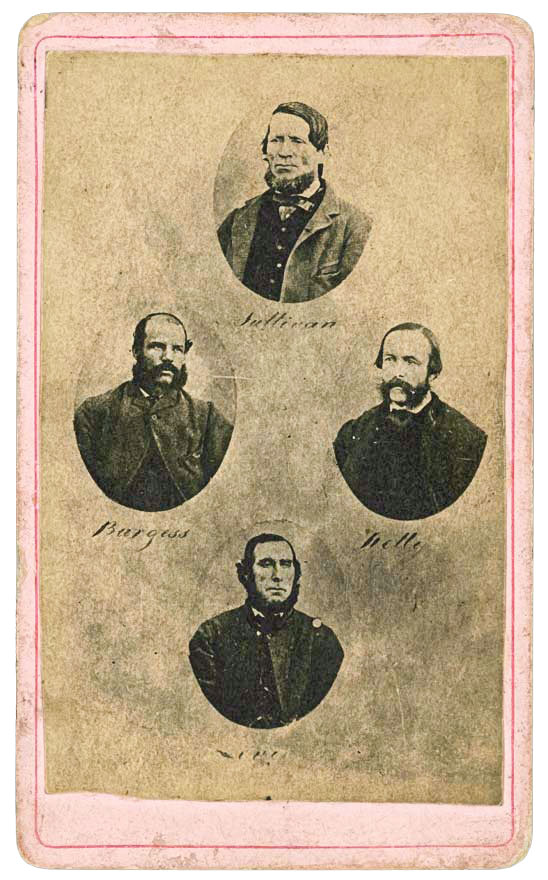 Shortly after 8.30am on Friday, October 5, 1866, a black flag was run up at Nelson Gaol, signalling that executions had been carried out. For those gathered outside, the hangings brought to a close one of the most shocking episodes in the colony’s history.

Some four months earlier, on June 13, four gold miners from Deep Creek in neighbouring Marlborough had been brutally murdered on the Maungatapu bridle path, a rough track that wound over the Bryant Range to Nelson. Decried as “cold-blooded systematic slaughter”, it was the work of the notorious Burgess Gang, four hardened criminals lured to New Zealand from Victoria by the prospect of easy pickings on the Otago goldfields.

Their leader, Richard Hill, arrived in early 1862, by which time he was calling himself Burgess, after a New South Wales runholder he had attempted to rob. He soon teamed up with an old prison mate, Thomas Noon—later Thomas Kelly—and they set about attacking and robbing lone prospectors. In this vocation they were following the example of a gang headed by Henry Garrett, another transported criminal, that had robbed no fewer than 15 men on the track from Gabriels Gully to Dunedin.

When Otago grew too hot for Burgess and Noon—they’d spent a 42-month stretch in Dunedin Gaol for lawbreaking—the two men made for the West Coast goldfields.

In Hokitika, they were helped by a third accomplice, William Levy, a “fence” (a buyer of stolen goods) with a good eye for robbery targets. In April 1866, Joseph Sullivan, a transported criminal turned prizefighter and publican, became the final member of the gang. Dogged by police attention, the gang moved on to Greymouth, where plans to rob a gold buyer, Edward Fox, went badly wrong. After a heavy drinking session, they murdered a surveyor, George Dobson, whom they mistook for Fox. Undeterred, and after another failed attempt to get Fox, on June 2, they sailed for Westport, intending to rob the local bank. Finding it closed, they set off once more, this time for Nelson. A strong police presence there drove all thoughts of bank robbery from their minds and instead, by now almost penniless, they walked to the Wakamarina goldfields settlement of Canvastown, just north of Deep Creek.

Levy soon heard that a local publican, Felix Mathieu, and three others were about to set off for Nelson, laden with money and gold dust. Burgess and his gang left first, intending to ambush the miners in the hills. On the way, they met another traveller, James Battle, whom they robbed and killed, fearing that he would identify them. The next day, in the early afternoon, Mathieu’s party stumbled into the gang’s ambush and, one by one, they were strangled, stabbed, or shot to death.

Suspecting foul play, a friend of Mathieu’s raised the alarm and within days, Burgess and his accomplices were rounded up. But with no bodies, the police case was weak. It was only the promise of money and a free pardon for any “innocent” accomplice who turned Queen’s evidence that secured a conviction. Sullivan took the bait and told all, downplaying his own role while hinting that the true tally of Burgess’ killings was much higher. In a final twist, having been cross-examined by Burgess, Sullivan was later sentenced to death for Battle’s murder. The sentence was commuted to life imprisonment. Sullivan protested that he had a deal with the government, and, with the support of the police, who regarded informants as key partners in solving crime, he was eventually pardoned on condition that he never return to New Zealand. The rest of the gang were buried in unmarked graves.