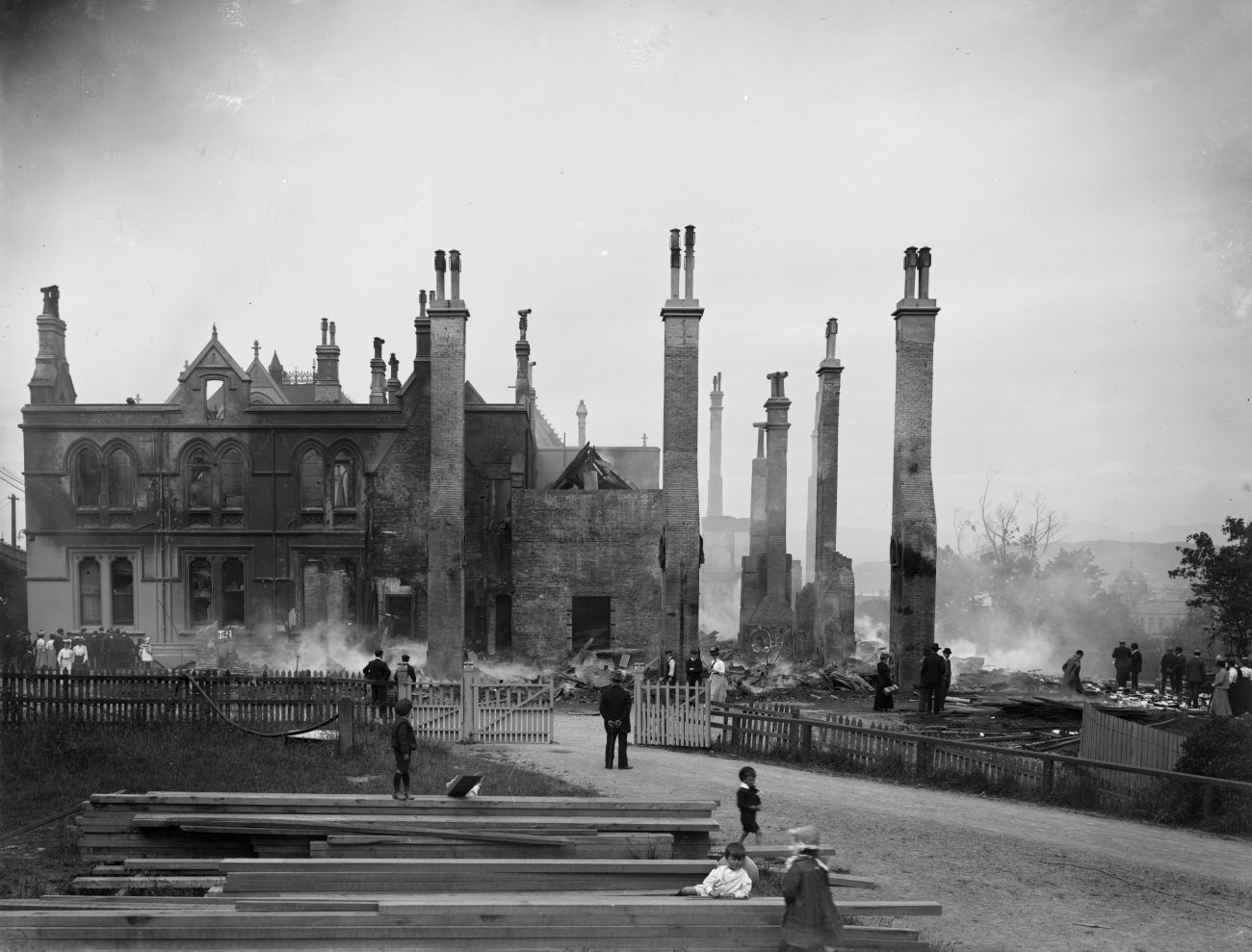 Having done his usual rounds, Amos Wilby, Parliament’s nightwatchman, was making himself a cup of cocoa shortly after 2am on Wednesday, December 11, 1907, when he heard a peculiar noise, like rain on the roof, coming from an old wing of the sprawling Parliament Buildings. A fire had broken out in the ceiling of the interpreters’ room on the upper floor, likely from faulty electrical wiring. Wilby promptly set off an alarm, and a patrolling constable who had seen flames shooting through the roof arrived to find him reeling out a water hose.

They were soon joined by the fire brigade, but it quickly became clear that little could be done to save the tinder-dry complex. By 3am, several upper rooms were ablaze and smoke filled the main lobby. An army of helpers began carrying or dragging roll-top desks, carpets, sofas, stationery, photographs, and whatever else they could lay their hands on to safety, piling everything outside on the grass.

At 3.35am, the roof of the Legislative Council Chamber crashed into the inferno. Thoughts now turned to saving the contents of the General Assembly Library. Since 1903, this had been the country’s de facto national library and, with its many rare prints and leather-bound volumes, something of a treasure house. The library was in a newer wing, made of brick and fitted with an iron fire-door—but it had a vulnerable roof, and shared a network of cellars with its blazing neighbour.

With the flames roaring “like a turbulent ocean”, and to the accompaniment of exploding bottles of wine and spirits in Bellamy’s, willing hands removed the most valuable items from among its 80,000 volumes, stacking them on the far side of the road.

Dawn showed the extent of the damage. The “workroom of the stalwart pioneers of our New Zealand history”, to use the words of one newspaper, had been reduced to a smouldering ruin. Blackened chimneys stood forlornly over half-burnt portraits of early legislators, damaged furniture, and scattered parliamentary papers. The ceremonial mace, forgotten in a cupboard, was no more. The charred remains of MP Robert McNab’s Murihiku lay where it had fallen from his office above. A gifted historian, McNab had recently revised this account of early Southland, scouring archives around the world to do so, and there was much lamenting at the presumed loss to the nation of his valuable records.

The fire affected matriculating pupils of Wellington Girls’ College and the Dominion’s junior scholarship students—it destroyed completed test papers, condemning many to sit a new round of exams.

No sooner were the flames out than talk turned to the question of insurance. It seemed that only the library’s contents were covered. But why insure books that were relatively safe behind fire doors and not, for example, the world’s second-largest wooden building—Government Buildings on Lambton Quay? If that caught fire, with a south wind blowing, said one forthright commentator, “all the fire brigades south of the Line could not put the fire out”. Indeed, the day after the fire at Parliament, artillerymen were sent to guard it, partly from fear that a criminal might torch the entire building to destroy the police fingerprint archive thought to be housed in an upper room.

Government Buildings still stands, as does the Parliamentary Library. And a new Parliament House soon rose, built this time not from timber but marble and granite. The New Zealand government had outgrown its wooden age.